So, we decided on a plan.  Here are the quick details:

We went over to the AT visitors center in the morning to schedule our summit date and to reserve a campsite.

Several other Thru Hikers were there including; Josie, OMG, Slim Shady, Supe, and the Tramily.  While we were talking to the lady who worked there, it was decided that we would stay at the Baxter campground together.  Josie reserved the spots for us, and it was settled.

Seven of the eight of us, also decided that we would use the food drop that Shaws offered.  We made plans to regroup after we went food shopping, and dispersed.

The Tramily was given a ride into  the nearby town of Greenvile by the father of another Thru Hiker named Waffels.  As we walked through the store we kept saying, ” This is our last resupply.”  It was a little sad.  That may sound funny, but it was another reminder that the life we had been living for almost half a year would soon be coming to an end.  I’m pretty sure it was the first time I looked at powdered mashed potatoes with a sense of nostalgia.

When we got back to the hostel we sorted our food on the picnic tables in the restaurant area of the backyard.  The restaurant portion of the business was closed on Mondays, so we had the whole place to ourselves.

The seven that were doing the food drop met up and brought our food to Shaws.  We put our food into several containers and labeled them with the time date and location of the drop.

We had to choose a team name.  I was elected to have the honor of the team named after me.

After that was done, all the planning and preparation was over.  It was time to enjoy our final zero day.

The Lake Shore House (our hostel) had kayaks that we could use, and we went out onto the lake.

Flashfire and I came up with a plan to fly her kite from the kayaks.  There was hardly any wind, but what there was was out in the center of the lake.  She could get the kite up in the air, but the wind would pull her toward the shore, and the wind would die.  I tied the back of my kayak to hers and paddled forward to fight the pull of the kite.  That worked pretty well, until the cable tying the kayaks together broke.  I then tied the front of my kayak to hers and tried paddling backwards.  That did not work so well, as seen in the video below.

At one point, I had gone back inside for something and bumped into the lady who helped run the hostel.  We found out yesterday that she was a retired DEA agent.  So when I saw her today, I asked what made her want to work at a hiker hostel in Maine.  She said she passed through the area on her thru hike a few years ago and it seemed like a nice place to work, but mainly it was because everyone staying there was so happy.

“Everyone was so happy.”  That comment sparked a moment of realization for me.  I had been in a state of general happiness for so long, that I forgot that it wasn’t the norm.

What was the cause of our happiness?  We were on the cusp of achieving our mutual goal of course, but it was something more than that.  Those of us that had made it this far, had reached a level of contentedness that I don’t think a lot of people reach in normal life.  I certainly hadn’t.

I think it was the underlying feeling of being around so many people who were content with the life they were living, was what she was actually referring to.

All this is to say,  I realized just how content I really was with my life in that moment.

Toward the end of the day, the eight of us that would be staying at Baxter Park together, found ourselves hanging out in the back of the hostel.  Josie, OMG, Slim Shady, Supe, and the Tramily.

We talked about all kinds of things.  For example: We found out that Supe had built a airplane from scratch.  He had spent many years building the thing and he was almost done.   He showed us pictures of it in his garage, and it looked awesome.

Around the time the sun started to set, the topic of how everyone  would feel on top of Katahdin came up.  One by one, we talked about how we felt about it.  Everyone generally had mixed emotions about it.  I think Supe summed it up well when he said, “I’m not sure if I’m anxious or emotional.  I (originally)  didn’t think I’d feel that much at the end, but now I might cry up there.”

Judging by all the people nodding their head when he spoke, I think a lot of people might cry up there.

We continued talking until the sun set behind the mountains. 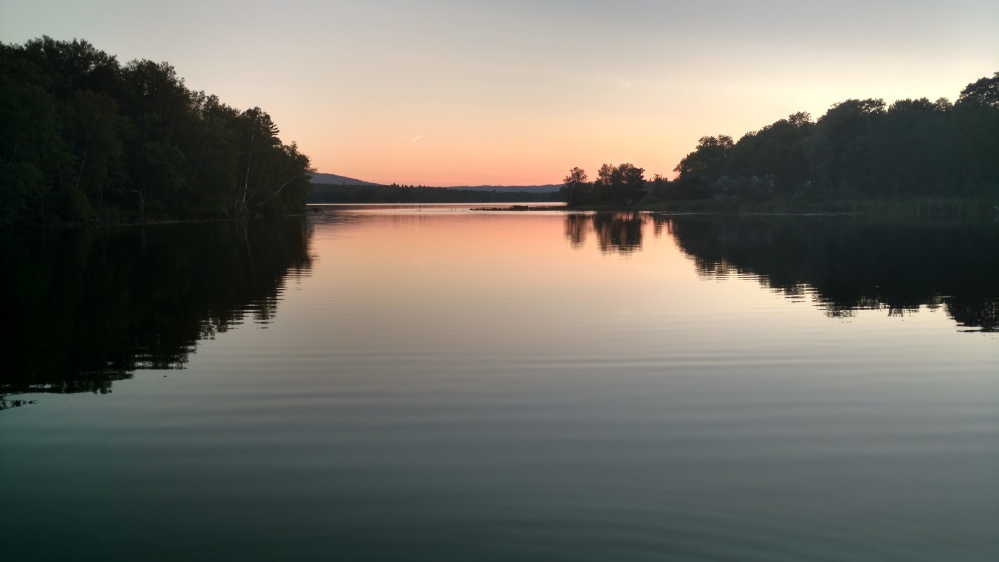 It was a great way to end the last zero day on the trail.