The day started out with a climb up Mt. Success.  It was windy and a fine mist coated every surface.  Within the first 3 miles, everyone had fallen several times. It seemed like New Hampshire wanted to have the last laugh.

I fell twice.  Both falls were because the planks that made up the trail in spots were wet and slippery.  My second fall scared Stoat, who was right behind me.  I hopped off a very small ledge and landed on a wet plank.  My feet flew up in the air before I could react.  I went full horizontal several feet in the air before crashing down to the ground.  Thankfully, I landed on the soft, wet planks instead of the rocks that were all around.  My backpack took the brunt of the fall.  It was like landing on a pillow.  I was fine, angry at myself, but fine. 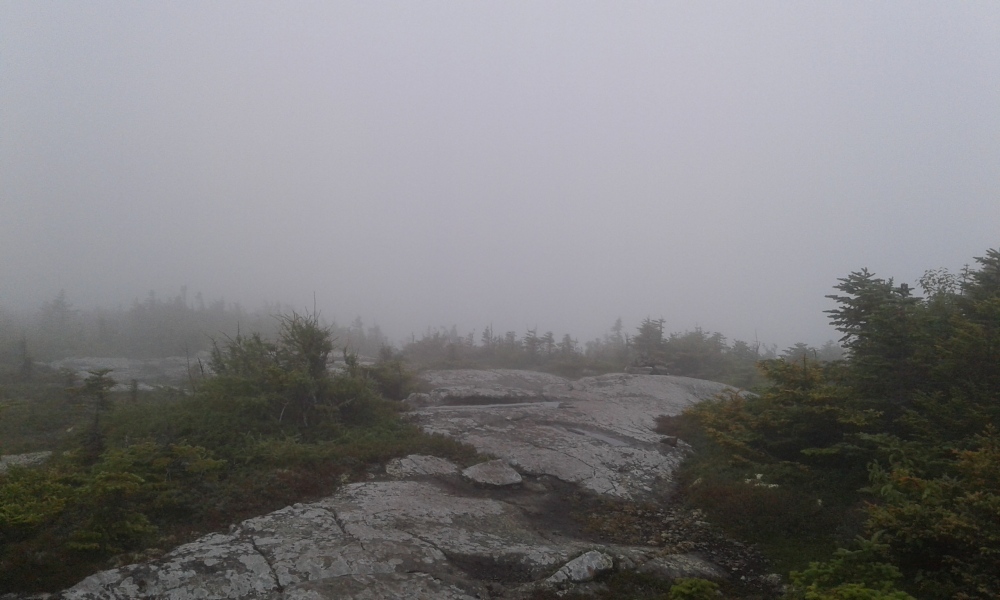 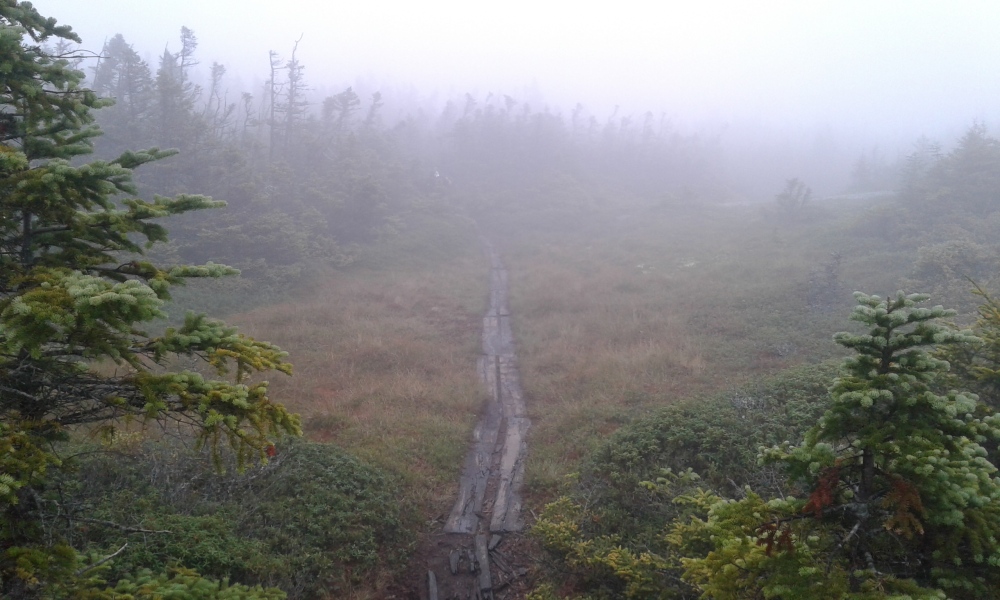 Video from the top of Mt. Success.

Stoat and I crossed over the state line together, and gave each other the border crossing high five for the last time. 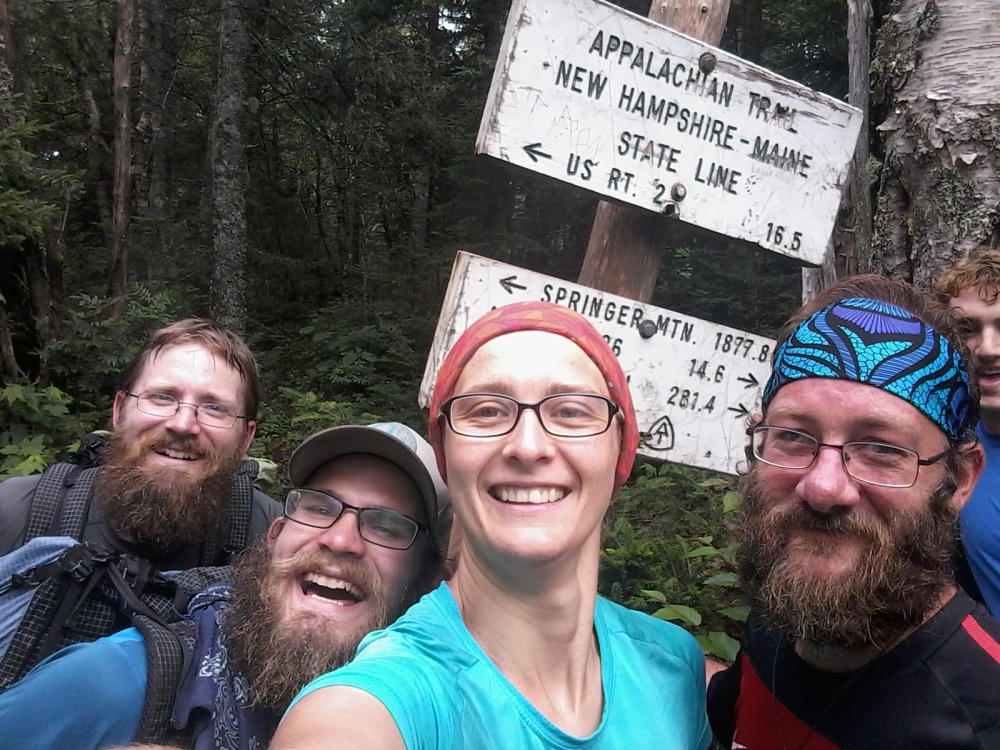 After the initial celebration, we sat down over to the side to take a short break.  As we sat looking at the sign,  the group went from a celebratory to a more reflective mood.

There was a feeling of accomplishment accompanied by incredulity.  We made it to Maine!  How could we possibly be in Maine?

The Tramily joked about having to change some of the some of the trail sayings.  “No Pain, No Rain, No Maine”, was now useless.  “No dying till Maine”, would definitely have to be changed.

As we sat there, there was more silence than speech.  I think all of us were trying, and failing, to process the magnitude of the event.

When Thru Hikers from years past were asked what was the toughest part of the trail,  Southern Maine was the most typical response.  When asked what the most beautiful state was,  Maine, was again the most common answer.

After a snack and a short break, it was time to see what all the hubbub was all about.

Over the course of the next 5.5 miles, we found ourselves going through a very rugged, yet beautiful, landscape. 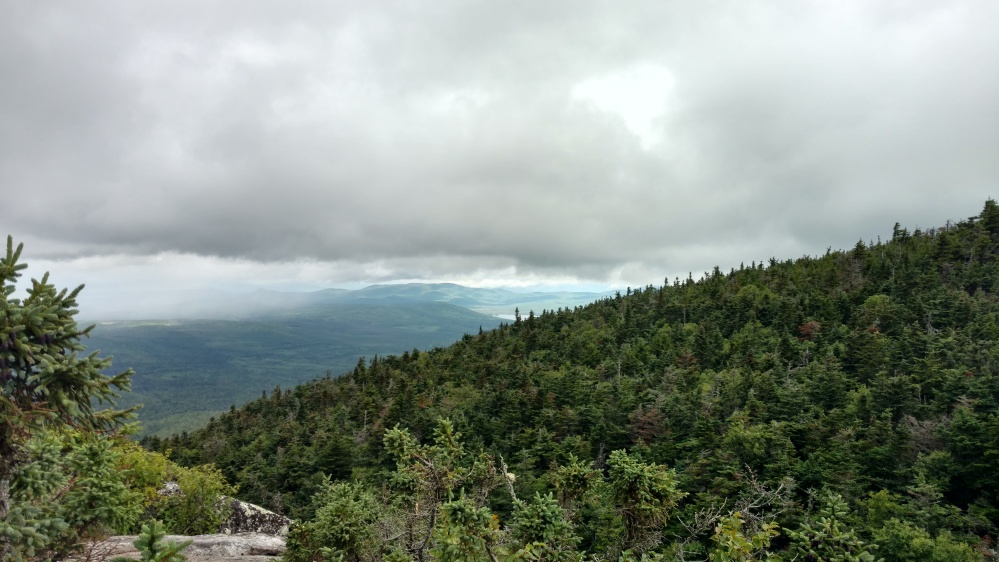 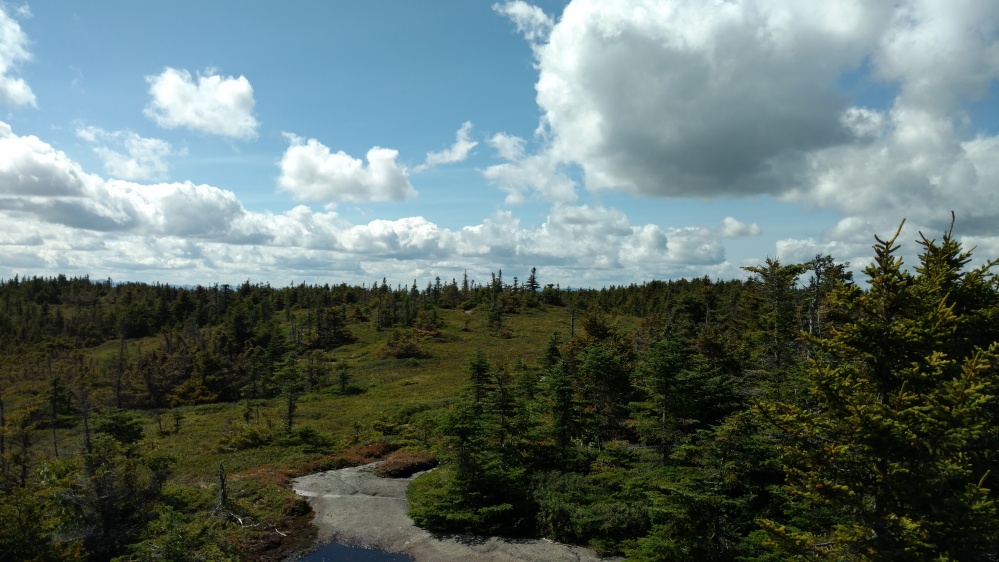 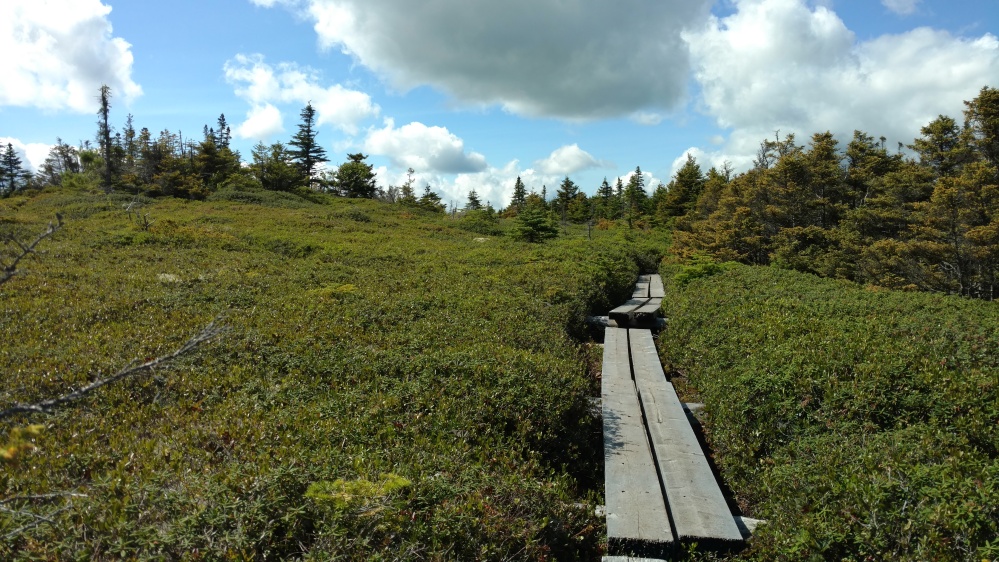 Shoo Bear had been hiking with us today.  He was a nice guy, but he wouldn’t stop talking about video games.  Encouraged by a positive comment or two from Stoat, he wouldn’t leave Stoat alone.  Regaling Stoat with stories about games he had never heard of.

Near the end of the day, we met up with Drop Top and Bear Bait, and began our decent into the Mahoosuc Notch.

The Mahoosuc Notch was billed as, ” The most fun mile on the AT, or the most difficult mile on the AT.  Depending how you look at it.”

On a topographical map it didn’t look like a big deal.  I looked like a pleasant, mile long walk through a valley.  There was hardly any elevation change at all.  But the Mahoosuc Notch wasn’t know for its elevation changes.  It was known for its sheer ruggedness. 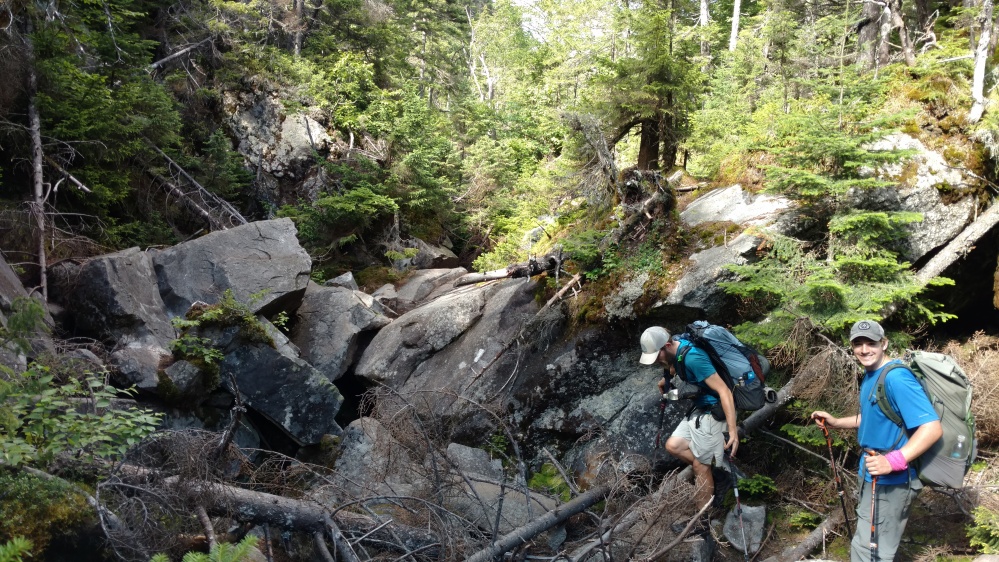 Almost as soon as we got into the official Mahoosuc Notch area, we saw patches of snow and ice.  The snow was nestled in out of the way places but it still amazing to see it.  Considering it was the middle of August.

Going through the Notch involved weaving over and under massive boulders.  At one point, Shoo Bear tried to go an alternate way.  His alternate way ended on the edge of a boulder. I was standing on a large boulder across from him, about 8 feet away.  Between us was nothing but open air and a 10 to 15 foot deep pit that ended in a pile of large, off camber stones.  He eyed my side and said, “I think I can make it.”  By this point, the rest of the Tramily could see what was going on.  Everyone shouted, “NO!”, but it was too late.  He took one step forward to launch himself across and slipped on take off.  When his launching foot slipped backwards, momentum took over, and he started going head first across the gap.  To his left, was a steeply pitched rock that had a small horizontal nub on it.  Luckily he saw it at the last second, and was able to push off of it with one of his feet.  He barely made it to the other side.

I’m pretty sure Flashfire cursed in at least two languages, and the rest of us would have, if we knew how.  We were pissed.

If he fell, the best result would have been breaking an arm or a leg.  The way he was pitching head first across the gap didn’t look like it would end in the best scenario.

Not only did he needlessly jeopardize his own health and well being, he did so with no thought as to where he was, and who he was with.  We were in a haystack made of gigantic boulders and we were surrounded by steep mountains.  There was no easy way out.  We had no phone signal.  There was no chance of a quick rescue.  It would have been our responsibility to keep him alive and get him to safety.

That would not be a fun situation to be in.

Even though we got angry, we didn’t let that take away from the experience of going through the Mahoosuc Notch.  It was a lot of fun.

It was great to have a camp full of people who we met early on in our AT experience.

The water source was the stream that flowed through the Mahoosuc Notch.  We never saw it in the Notch because it was under all the rocks.  Sometimes we could hear it making its way under the boulders, but we never saw it.

The water was very cold and delicious.  It was some of the best tasting water on the AT.

We still filtered it as a precaution.  From what we hear, Thru hiking and mind-altering diarrhea are two things better experienced separately.