Over the least several posts I described how divided I felt about finishing the AT.  The thoughts, “Yes!  We will be Thru Hikers!”, and “No! I don’t want it to end”, simultaneously running through my mind.

In the last post I compared waiting to touch the sign, to a cliff diver getting ready to take the plunge, but that’s only half the story.  The, “Yes! We will be Thru Hikers”, part of the story.

Later that very same day, as I lay in a bed, I couldn’t shake a different image out of my head.

Hikers were walking up to the sign, but the Tramily stayed back a little and watched others do their thing.

Even when there were opportunities to go up to the sign, we still held back.

It reminded me of the viewing portion of a wake.  The casket is up at the front of the room, but we avoid going up to it at first.  Up until now, death was only a concept.  Now that we were “in the room”  everything was becoming all too real.

That’s not to say we were all doom and gloom at the summit.  Like I said in the last post, the entire summit was brimming with excitement, and so were we.  The sadness was only a small part of what we were feeling.

The Knife Edge trail is a 1.1 mile long trail that goes across a narrow rocky path with precipitous drops on both sides.  Originally we wanted to hike this section, but due to the high winds, wet rocks, and the complete lack of view, we decided to take a different way down. 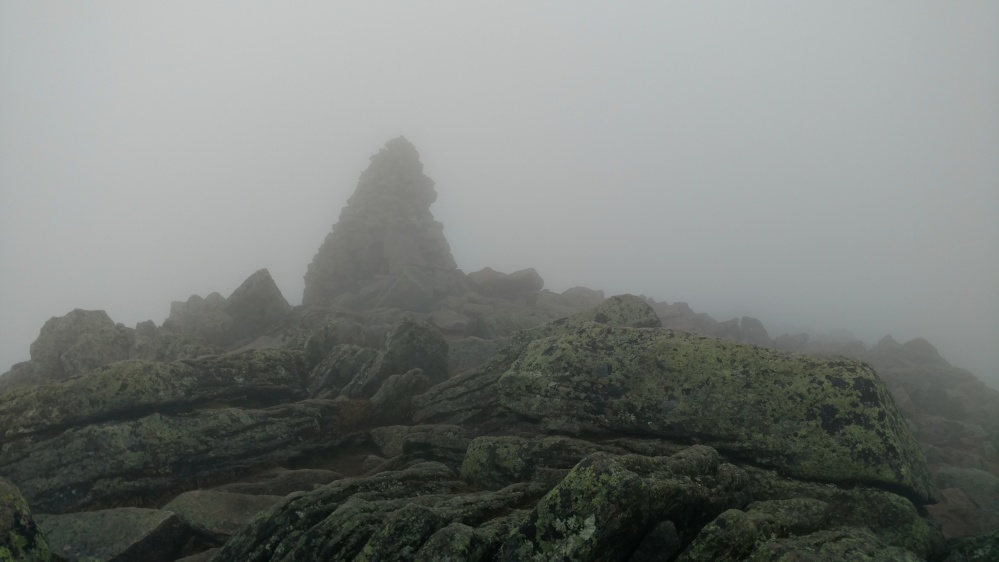 The route we decided to take back was called the Abol trail, and involved hiking back down the AT for a short distance.

As we hiked south, we greeted other hikers on their way up to the sign.  We saw Slim Shady hiking to the summit with his mom, Supe, Ghost and several others.  Hugs were given all around. High fives and words of encouragement exchanged.

Then we came to the turn off for the Abol trail.  Before we set off down the trail, I realized that we would no longer be following the white blazes that had guided us for the last six months.    I took a picture of the last white blaze, and looked out at the cloud covered, rocky expanse for a long moment.  It was the last view that we would have from the AT.

After only a few minutes of hiking down the Abol trail, I started to regret taking that way down.  The trail went steeply down a rock slide and was more dangerous than it was fun.  The trail had only recently been reopened, and all the large boulders and rocks that we were climbing over were covered in a fine sand.  The fine sand acted as small ball bearings, causing us to slip and slide all over the place.  It was downright treacherous.  It seemed like each Tramily member had a close call or two.  I scraped up my leg and knee in the process.

As we went down the trail I started to get angry.  Angry that I wasn’t on the AT, angry that we took this stupid way down, and angry that I cut up my leg on the very last day.  Thankfully once we got out of the clouds we had some nice views to temper my anger. 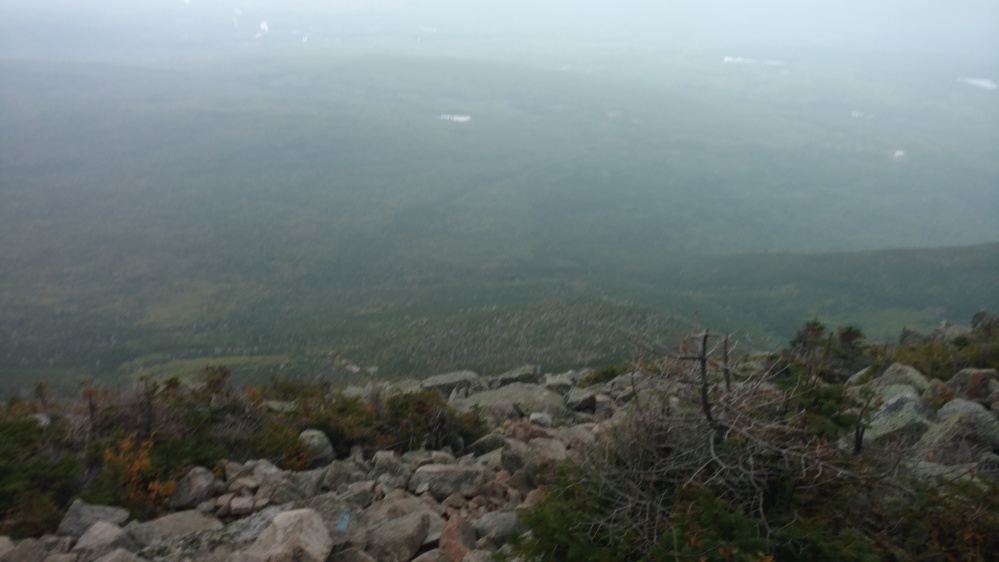 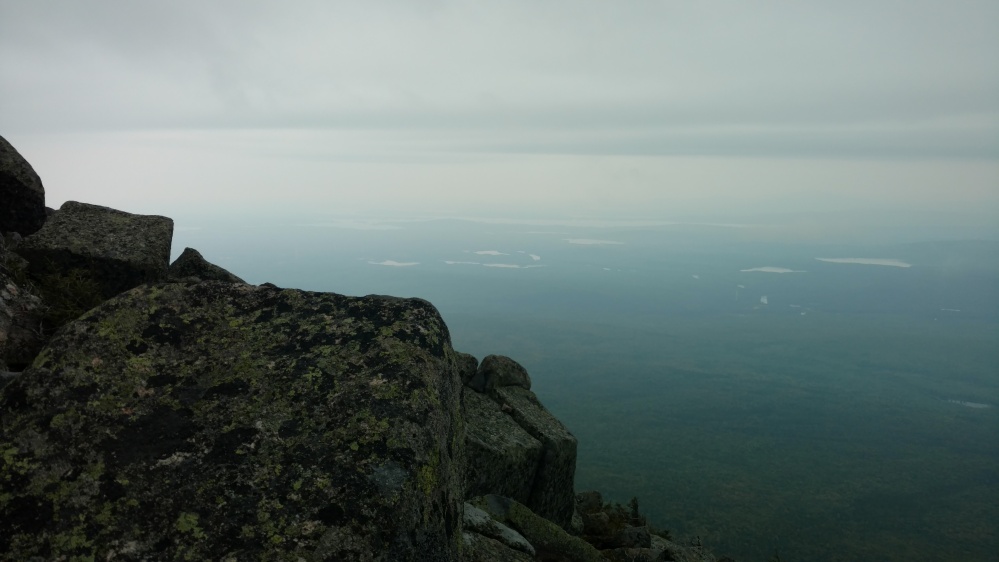 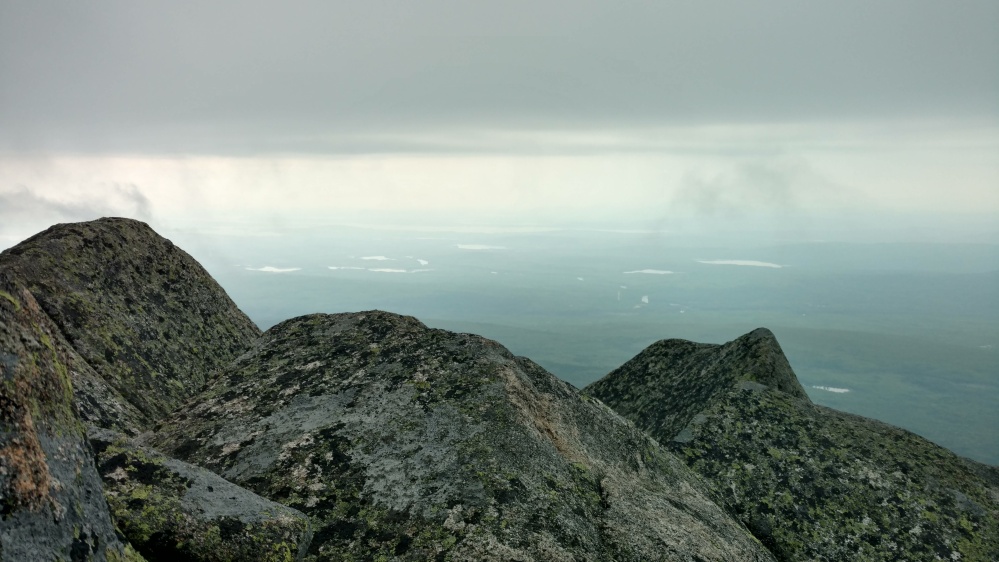 By the time we got back to treeline I had calmed down.  Beautiful views tend to have that effect.

We caught up to Mr. Tom who was now hiking with two of his adult sons.  The Tramily hiked the remaining few miles to the parking lot with them.

When we got to the parking lot, the rest of Mr Toms family was there to greet him.  After saying hello to them, we left Mr. Tom to enjoy his family.

Other than Hamilton, we didn’t really know any of the other hikers, so we weren’t invited over. Which was understandable.   Still, it was kind of hard to not feel like we were being excluded from a party.

We sat on the grass and ate some snacks.  Judging by the large amount of people there were, and the small amount of cars in the parking lot, it didn’t look like we would get a ride into town any time soon.

I think Mr. Toms family felt sorry for us.  They had originally said they didn’t have enough room to fit all four of us.  But, after seeing how miserable we looked sitting on the side of the road, they moved some things between the cars they had there, and offered us a ride to town.

Stoat and I fit in one car, and Zeus and Flashfire fit into another.  As we drove through the park, I was surprised at how long it took us to get out of Baxter state park.  If Mr. Toms family hadn’t given us a ride out I don’t know what we would have done.  Many guidebooks and people on the internet say that getting a ride out of Baxter is easy.  We didn’t find that to be the case.

Mr. Tom’s family dropped us off at the Appalachian Trail Lodge in Millinocket.  Stoat and I went inside and reserved two bunks for ourselves.  When Zeus and Flashfire showed up they were told that the place was full.  Unbeknownst to us, Stoat and I had reserved the last two bunks in the place.

Zeus and Flashfire had to find another place to stay.  In hindsight, Stoat and I should have given up our beds and went someplace else to be with Zeus and Flashfire.  We should have, but we didn’t.  All I can say is that we were physically and emotionally exhausted, and that our decision making skills were greatly diminished. 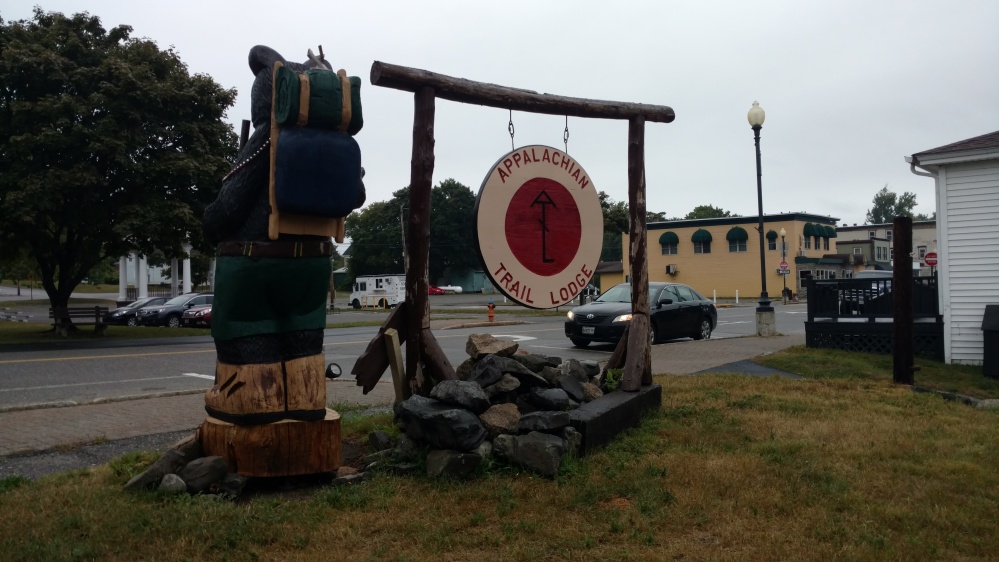 Zeus and Flashfire wound up staying on the other side of town.  They were so far away that it didn’t make sense to try to meet up with them for dinner.  Stoat and I wound up eating a meal at the pizza place in town by ourselves.

When we came back to the lodge / hostel,  I saw the woman who showed us to our bunks when we first got there.  She looked familiar, but I couldn’t quite place where I had seen her before.

When I asked her if I had seen her someplace else before, she grinned slightly.  She said,”  Think way back towards the beginning of your hike.”   That’s when it came to me.  She was the co owner of the Hiker Hostel in Georgia.  We stayed there the night before we started the trail.

She and her husband were friends of the owner of the Appalachian Trail Lodge. They had recently sold the Hiker Hostel and were visiting their friends before going on to the next big adventure.

I think it was pretty cool that, on our first and last day, we saw the same person.

Stoat got a text from OMG that said several hikers were going to the local bar to celebrate.  Neither Stoat nor I felt up to going.  We wound up calling it a early night and retired to our beds.

I laid in bed and tried to processes everything.  I kept coming up short.

” I still cant believe it’s over.  It still hasn’t hit me.  We have hiked over 2200 miles in the last 6 months and it has become a way of life.  I think it will take a while to transition back into “normal” life.  Maybe I never will.”