Join 27 other subscribers
Posted on September 6, 2018 by danxtj

It rained all night last night.  I don’t mind the rain at night.  I find it soothing and it usually helps me fall asleep. Thankfully, it stopped around five in the morning so we didn’t have to hike in it.

For the first three and a half miles of the day, we walked along the rocky shores of Rainbow Lake.  It was a larger lake and the water was very clear.  We could hear the call of a loon off in the distance.  It was a very peaceful area.

No one took a picture during those first 3.5 miles.  The fast that is was the last full day was probably on everyone’s mind.

After passing the lake, the trail brought us through a mossy covered woodland area.  I’m not sure if it was all the moss or because nothing was around, but it became really quiet.

The trail climbed a small 500 foot hill named Rainbow Ledges.  There was supposed to be a view of Katahdin from there, but it was clouded over.

After Rainbow Ledges, the trail became very rugged.  Large boulders, roots, wet planks, small streams, and mud, all conspired against us.  Despite the rough terrain, we made it through just fine.

We stopped at Hurd Brook Lean-to for a snack.  As we were getting up to leave we heard a big group of Thru Hikers coming through.  We heard a loud splash and some cursing.  It sounded like one of them fell in a stream.  We decided to move on before the large group got to us.

Shortly after passing the sign, we came to Golden Road.  The road that separates the 100 mile wilderness from Baxter State Park.

As we walked down the road, we saw a car pulled over to the the side of the road. “Could it be?”, we said.  As we got closer we could see that someone had a table set up next to the car.  “YES! Trail Magic!” 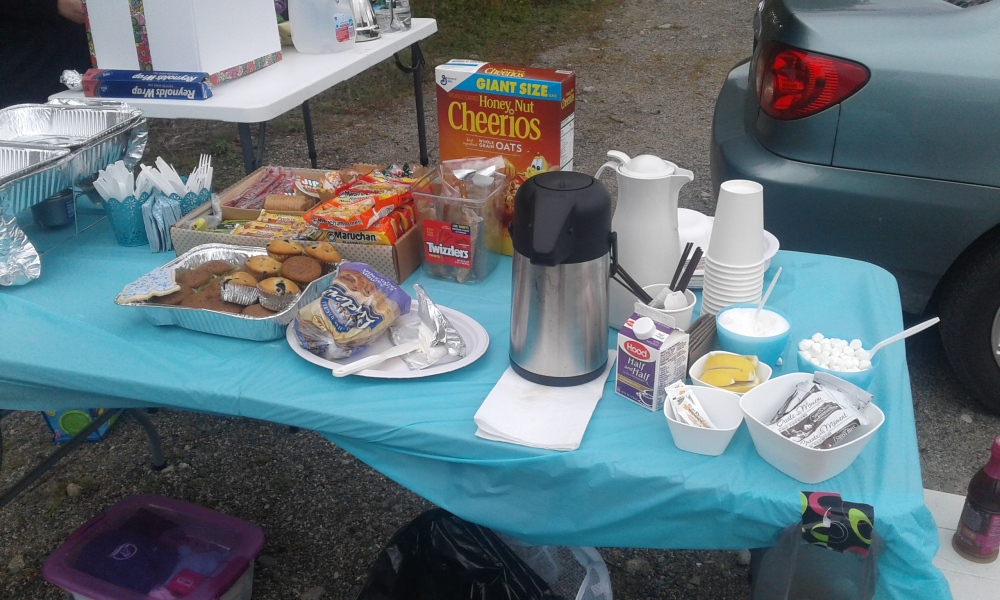 The woman in charge of the trail magic was named Pineapple. We had arrived as she was changing over from breakfast trail magic, to lunch trail magic.  We wound up having a little of both.  As we were eating, the large group of hikers showed up.  To our surprise Hamilton was with them.  We hadn’t seen her since the 501 Shelter in Pennsylvania!

One of the guys had a bandage around what appeared to be a bad cut on his leg.  He was the one who we heard fall in the stream.  He said he was fine, but it was probably a good thing for his leg that he only had little time left on the trail. 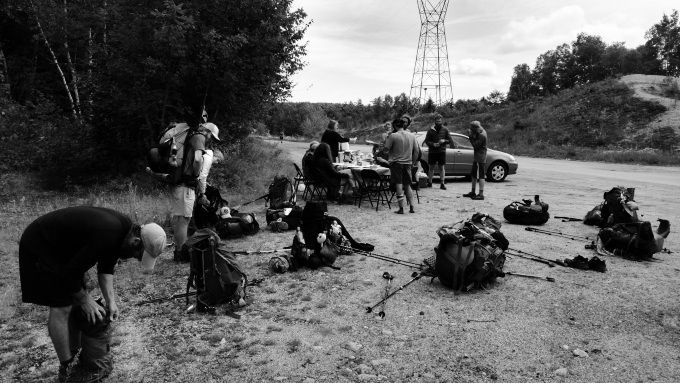 After we left the Trail Magic, we crossed the famous Abol Bridge. The bridge wasn’t much to look at, but the view was supposed to be fantastic.

When we crossed it the view was less than stellar.  We were supposed to see Katahdin in all its glory.  Instead, we saw mostly clouds.

That was okay with us though.  The sky looked like it was beginning to clear up, and we should have a few more chances to see Katahdin before the day is through.

After crossing the bridge, we came to the Abol Bridge General Store and Restaurant.  The smell of greasy food wafted out the door.  The Tramily looked at each other for a second, then everyone seemed to nod at once.  We went into the restaurant and got a table.

Hiker huger is an amazing thing.  We had just left the Trail Magic, and now we were sitting at a table, looking at the menu like we hadn’t eaten anything all day.

After filling our bellies for a second time, we got ready to get back on the trail.  At that moment, Elmer Fudd (The German hiker we met at The Barn) came walking toward us.  He was on his way back from the summit of Katahdin.  He did it!  He was now a Thru Hiker.  He said the weather conditions were super sketchy when he was up there.  High wind, rain, and even some hail.  He seemed to be slightly dazed from the experience.  It took a minute to realize he wasn’t dazed because of the harsh weather, he was in a daze because his adventure on the AT was over.  I wondered to myself,” Will we react the same way tomorrow?”

After saying goodbye to Elmer Fudd we got back on the trail.

During our little detour at the restaurant the sky had cleared up considerably.  Now a good portion of Katahdin was visible.

And then we were there.  Baxter State Park.  Seeing that sign caused the two thoughts that were in the back on my mind most of the day to come forward.  “YES, YES, YES!”, and “no, no, no….”

It was exciting to see that we were entering a place of AT legend, a place I had dreamed about.  At the same time it was real, physical evidence that our hike really was coming to an end.  Stoat felt the same way, and I’m pretty sure Zeus and Flashfire did too. 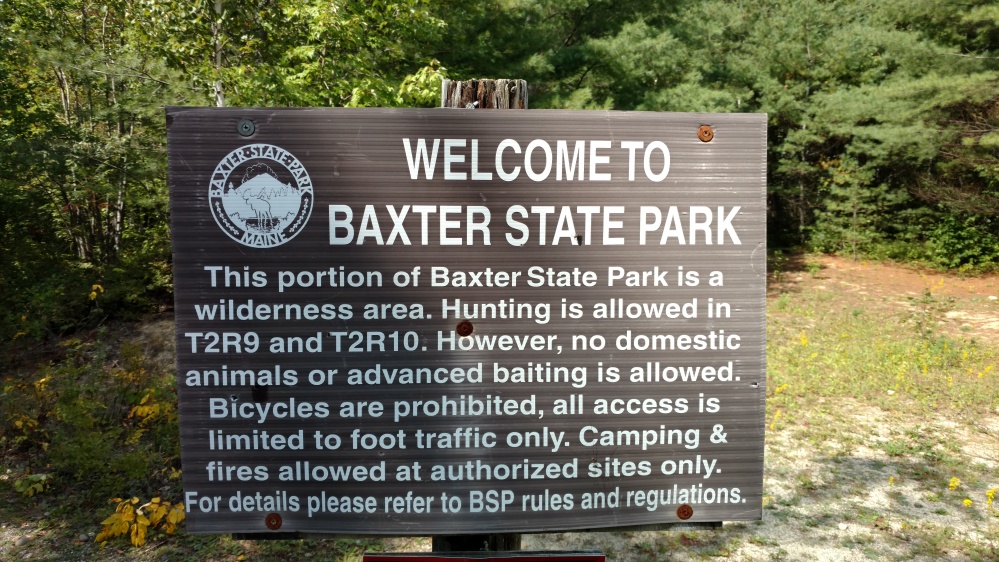 After passing the welcome sign, we came to the wall of rules.  Baxter State Park has come under fire from some of the hiking community for having too many rules. While they do have a lot of rules, most of them are the same as anywhere else.  After standing there for a few minutes trying to figure out if certain rules applied to us, a ranger came by and cleared everything up for us.

I didn’t feel like there were too many rules or that I was being prevented from doing anything I would normally do.

After leaving the wall of rules, the trail paralleled the Abol river for the next 3.3 miles.

Then the trail made a right turn and began to follow the Nesowadnehunk upstream.

After a few miles of following the stream we came to Big Niagara Falls.  It wasn’t that big, but is was a lot bigger than Little Niagara, which we passed a few minutes later.

We decided to check out the short side trail to Big Niagara.  It was a cool little spot.

We passed on checking out Little Niagara.  The side trail was longer and it was getting later in the day.

After the falls the trail continued following the stream for another mile and then made a sharp right turn.  We crossed a dirt road and walked past a very nice small pond.

A mile later we came to Grassy Pond.  It was here that I realized that Baxter was a little different from the rest of Maine.  The view was so different from what we had seen so far, and so downright beautiful,  I found it hard to hike on.

Right after we reluctantly left Grassy pond, we had our first clear view of Katahdin.  It was only the shoulder of Katahdin, but it was in itself impressive.  Somewhere up there was a sign.  Not just a sign, but THE sign.  The most famous sign on the trail.  A sign that marks the top of Mount Katahdin, and the northern terminus of the Appalachian Trail. 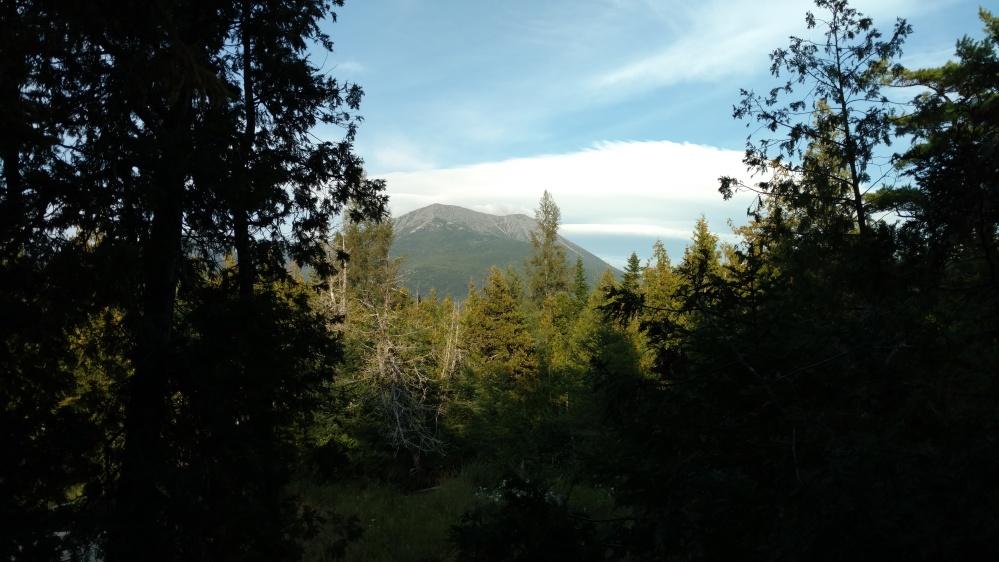 After leaving the view, the trail went through a fun section involving a lot of planks.

Then we popped out onto a dirt road, and saw the sign for our campground. 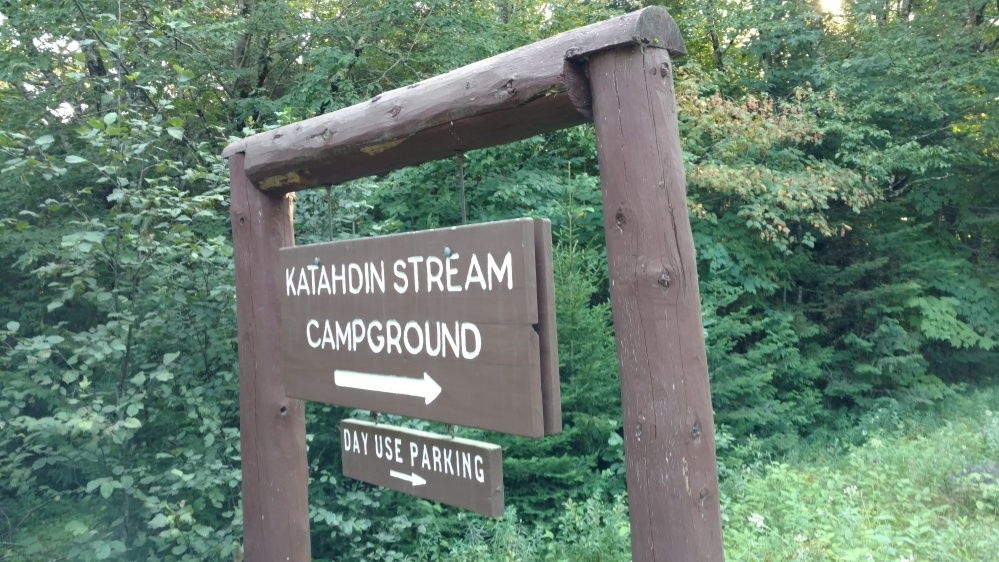 We walked a short distance to the rangers station to get our Katahdin Permit.

Sierra Mist and Sleepy Bear were already there and congratulated us.  They were really nice people.  I wish we met them earlier in the trip.

The Tramily walked up to the cabin, put our gear down, and went inside. 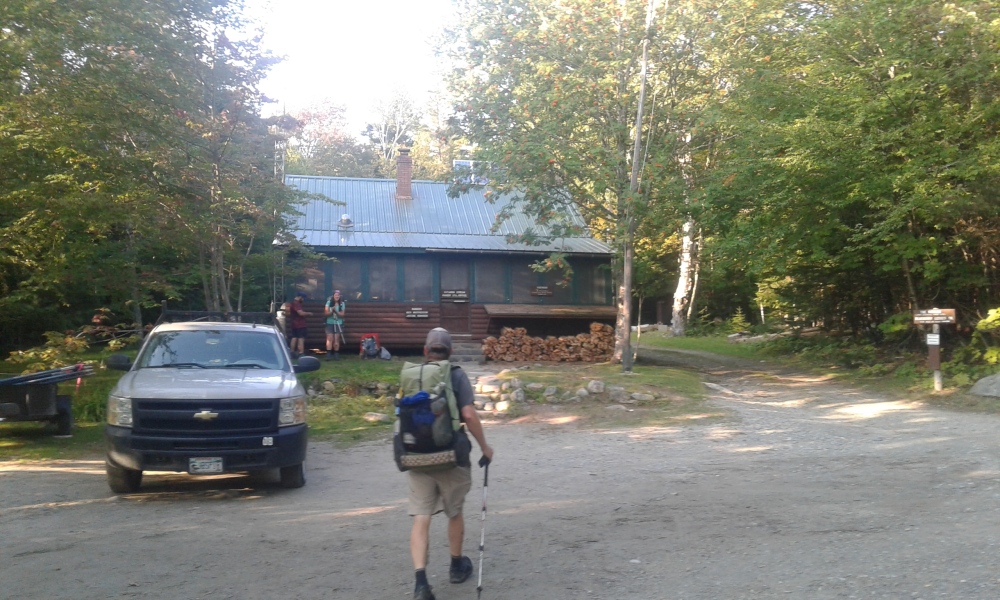 There was a ranger inside, and we lined up to talk to him.

He got a book out, asked us a few questions, and handed us our Hiker Permits.  We were good to go for our ascent tomorrow.

We had heard so much talk about the rangers being very strict, and that there was a limit on how many thru hikers could climb Katahdin.  We were actually a little nervous of what was going to happen when we got there.

All that nervousness was unfounded.  We were in and out of the ranger station within ten minutes, and the hiker numbers weren’t even half the allowed amount for the year.

After registering, we went to go find our reserved lean-to.

The Katahdin Stream Campground is a large campground, with several different types of camping available. 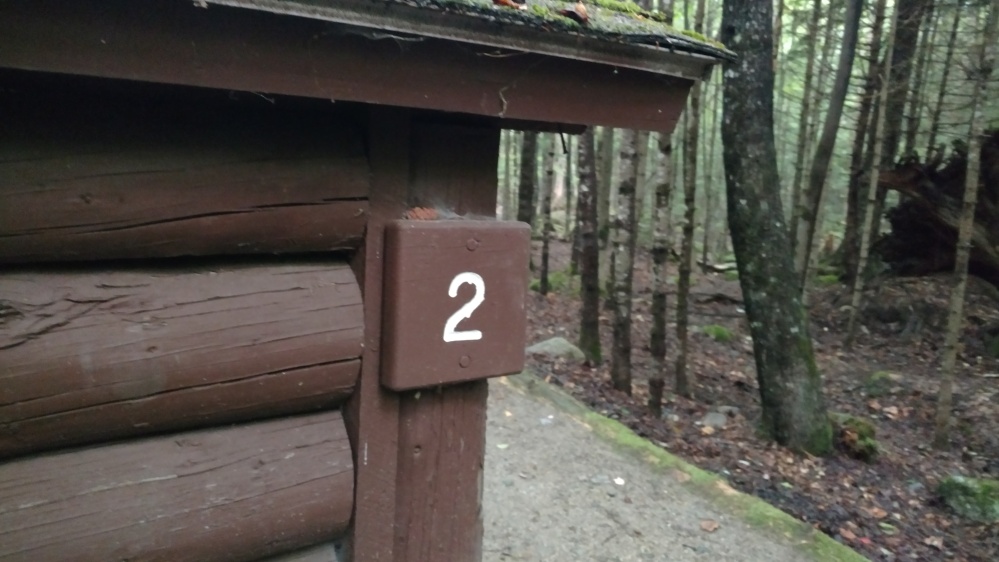 The lean-to was smaller than most shelters we had seen.  Ours fit four people very snugly.

As we were getting our stuff unpacked, OMG and Josie stopped by.  After catching up, they let us know that there was trail magic going on in the car camping park on the grounds.

We did wind up paying a visit to the neighboring lean-to though.  OMG, Josie, and Supe were staying there, but only Supe was around when we got there.  He didn’t feel like socializing at the trail magic either.  We talked to him for a few minutes, before heading back to our lean-to.

Zeus and Flashfire returned as we were getting ready for bed.  Flashfire said, “Guess who was doing the trial magic?  Mr. Tom and his girlfriend!”  I almost wish we went, but in reality we were too tired to be any fun.

From the comfort of the lean-to, we watched the light fade in the forest for the last time.  Quiet fell over the camp.  With images of the last six months running through our minds,  one by one we drifted off to sleep