Stoat and I made quick work of the 2.9 miles we had to hike to get to the road.

Just before getting to the road, we met up with Zeus and Flashfire.  They had found a stealth spot somewhere beyond Ethan pond, and were waiting for us to come down the trail before getting a ride into town.

The town we were trying to get to was called North Conway, and it was 20 miles away.  If successful, it would be our longest hitch hike yet.

The chances of all four of us getting picked up at once was almost zero.  The chances of someone stopping for Flashfire was fairly high.  For some reason, women have a much easier time getting a hitch.  I guess its because they don’t fit the profile of the typical ax murder.  So we came up with a plan.

Flashfire and myself would stand next to the road with our thumbs out.  When someone pulled over, Flashfire would stay and my brother and I would get the hitch.  Then Flashfire would help flag down another motorist and get a ride for herself and Zeus.  It sounds a little dishonest now that I’m writing about it, but at the time it sounded like a fun thing to do.

Stoat and I took one car,  while Flashfire and Zeus got in the other.

The people who picked Stoat and I up were a couple in their fifties.  It wasn’t too long into our conversation when the lady started talking about hooking one of us up with her daughter.  After saying “Honey” several times in an admonishing tone, her husband gave up trying to stop her.

Apparently, their daughter stayed at the Notch Hostel the same night we were there.  The mother showed us a picture of her daughter as her husband let out an audible sigh.  She was pretty, and I vaguely remember someone who looked like her at the hostel.  If she was indeed the daughter, I got the vibe that she was very content to do her own thing.

I don’t want to give the impression that that was all we talked about.  They were very nice people, and we talked about many other things.  In fact, the husband was an AT section hiker.  He only had 500 miles left to go.

It was just the part of the conversation where the mom offered to set her daughter up with one of the two bearded, smelly strangers in the back seat that was a little awkward.  As that wasn’t something that happened to us often, Stoat and I weren’t quite sure what the proper response etiquette required of us was.

I think the mom offered to give us her daughters number.  I can just imagine how that conversation would go.  “Hi!  I’m a random hitchhiker your parents picked up.  Your mom gave me your number so….yeah…. I’m just going to hang up now. ”

Anyway, they dropped us off in downtown North Conway.  We thanked them for the ride and looked at our surroundings. 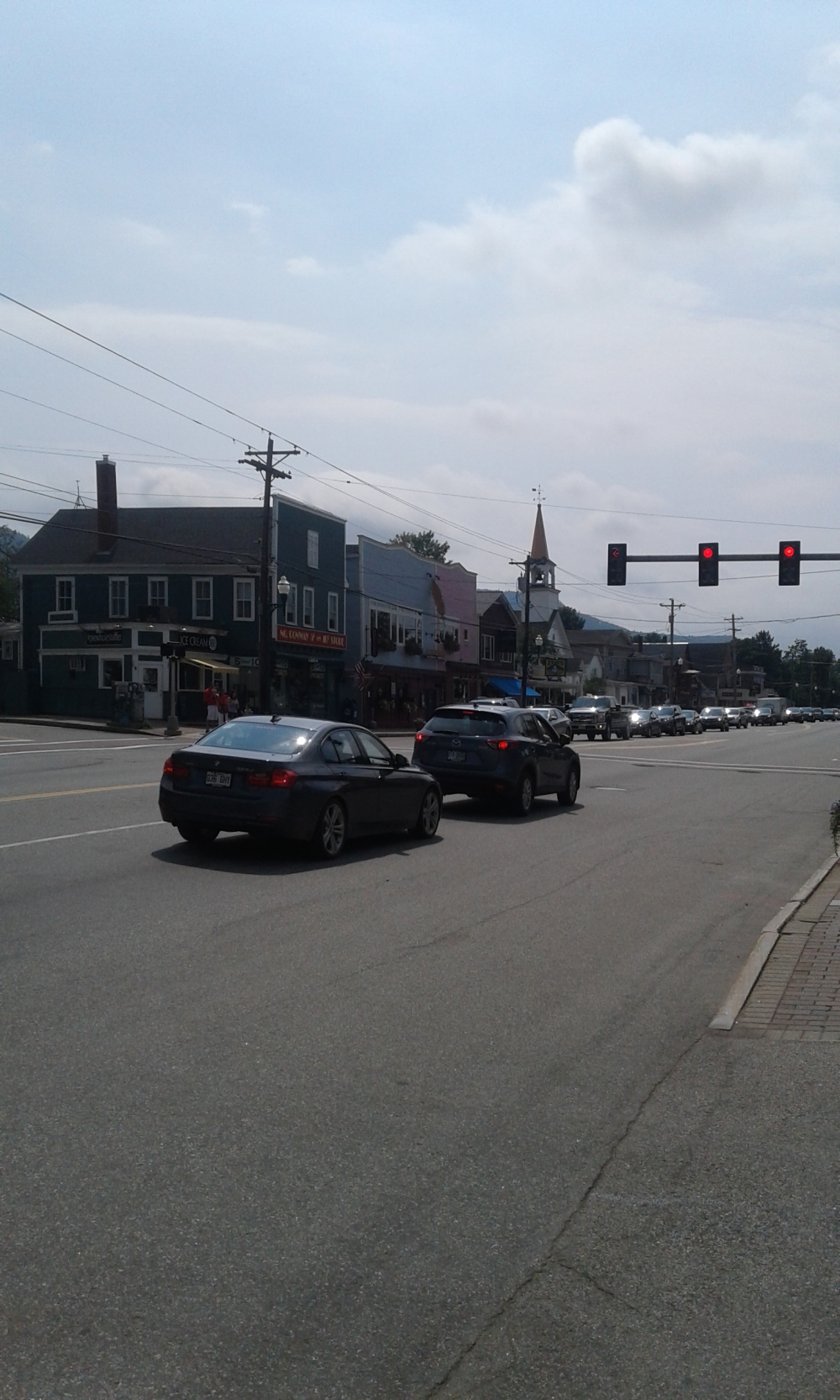 North Conway was a touristy New England town.  That was fine with us.  It meant that there were plenty of places to eat.  Zeus and Flashfire got dropped off on the other side of town, so the Tramily decided to eat separately.

Stoat and I decided to go to a breakfast place across the street.  When we walked up to the door, we saw a long line of people waiting to order.  We decided to go somewhere else.  As we were leaving, a woman who was sitting in the outside dinning area enthusiastically  asked us if we were Thru hikers.

That question led to us eating breakfast with complete strangers.  The woman went by the name Sky Goer and her companion went by the name Hand Lens.  The two women were in the middle of becoming 48ers.  48ers are people who have climbed all 48 mountains over 4000 feet in New Hampshire.

We wound up talking to them for a long while.  Flashfire and Zeus walked by and we asked them to join us.  The conversation continued until we decided that we better find a place to stay.  We said goodbye to Sky Goer and Hand Lens and hit the road.

Through a series of events we wound up at the Briar Cliff Motel.  The motel itself was fine, but the prices, possibly higher because it was peak tourist season, were higher than we would have liked.  The Tramily got one room for two nights.  Tomorrow, we zero!

The rest of the day was spent mostly running errands, food resupply etc.

The Tramily ate dinner with Sky Goer and Hand Lens at a local Mexican restaurant.  We had another good conversation and ate a lot of nachos.

When the Tramily got back to the motel, a storm was brewing.  The winds picked up, thunder crashed, and rain started coming down in a heavy downpour.  It was a good night to be inside.