We had basically camped at the base of Mount Moosilauke, so as soon as we left the shelter, the trail started to head upwards.  From the shelter we would climb 3117 feet in 3.6 miles, to get to the southern shoulder of Moosilauke. Steep! Especially considering that in the last mile we climbed over 1000 feet.

Besides being steep, the trail was also rocky and rugged.  It reminded Stoat and I of some of the trails in the High Peak Region of the Adirondacks.

Once we got to the top of the southern peak, the trail mellowed out considerably. The remaining mile to the top of Moosilauke was great.  It was like the mountain rolled out the red carpet after we paid the price of suffering up the mountain.   The trail brought us across a ridgeline covered in 7 to 8 foot trees.  We could catch glimpses of the valley below here and there. 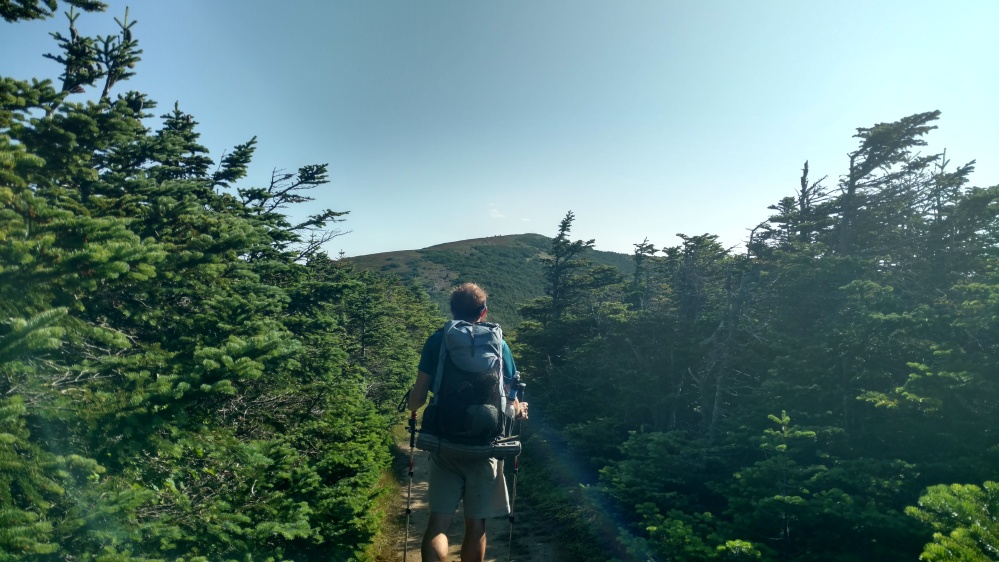 As the trail went higher, the size of the trees got smaller. 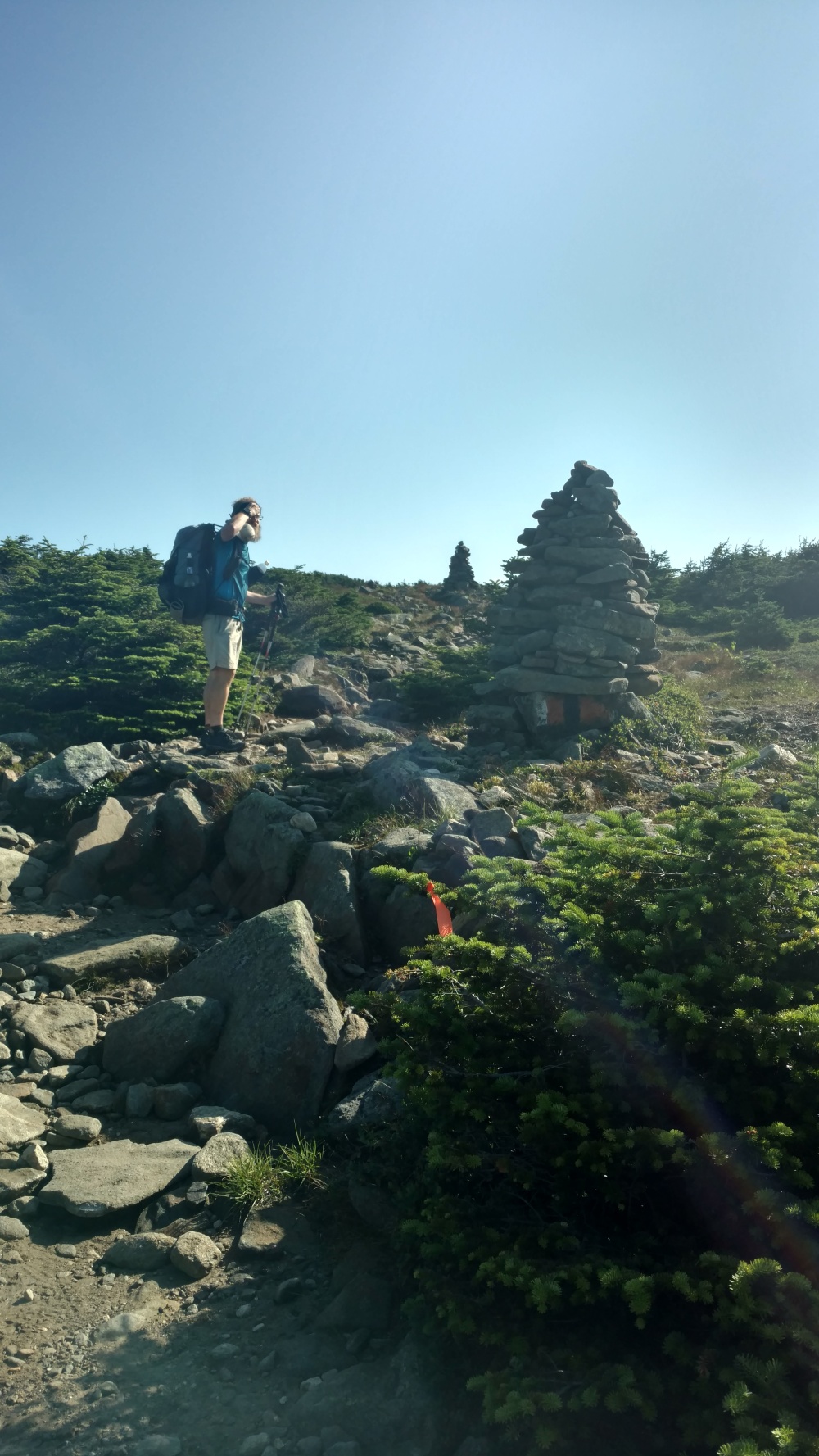 Eventually the trees petered out all together.  We were above treeline, and we were at the top of the mountain, and it only took us 2 hours to get there from the shelter.

The view was incredible. 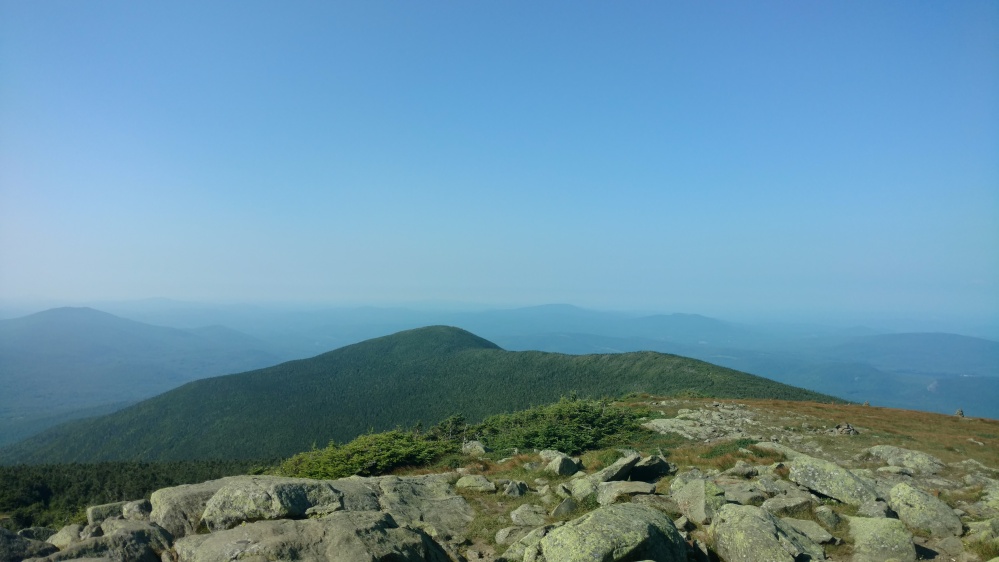 It was  windy and cool at the top.  We took out our jackets and enjoyed the view.

We had a short day planned, so we decided to hang out there as long as we could.  For the first 20 – 30 minutes we had the whole place to ourselves.  The openness of the summit, combined with the rounded shape of the peak, made me feel like we were at the top of the world. 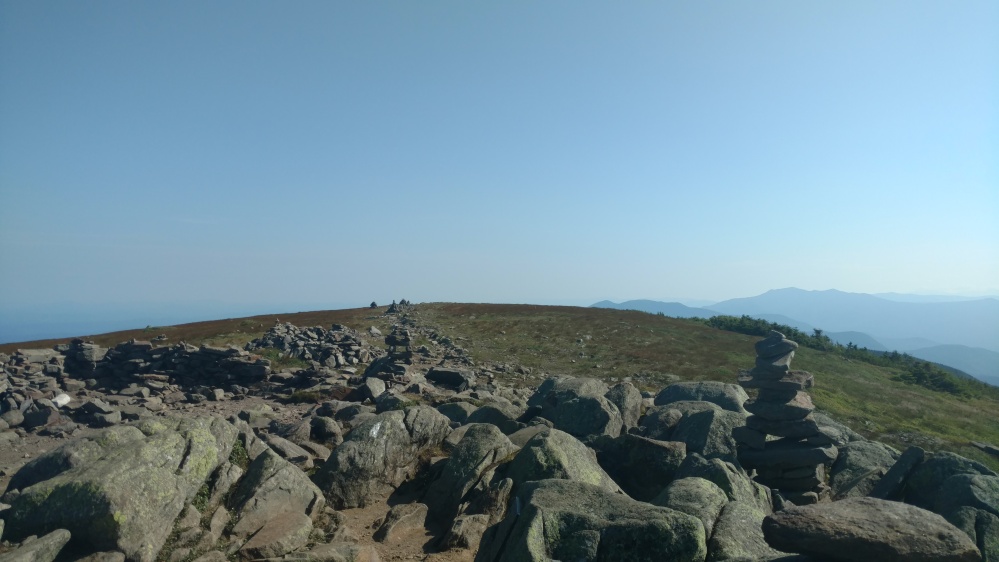 Eventually a few more hikers began to show up.

I escaped to a spot sheltered from the wind and made a quick video.

Once we got going again, I couldn’t help looking back a few times.

For a little while, the trail gracefully made its way down the mountain.

That is, until is came to a stream.  Then the trail plummeted down the mountain, losing 2185 feet in 1.8 miles.  That was not comfortable.

If you were to ask a Thru hikers whether they prefer climbing or descending, chances are that they would say climbing.  Climbing requires effort but is mostly painless.  Descending, on the other hand,  requires less effort but punishes the joints, especially the knees.  A descent that steep… hurt after a while. 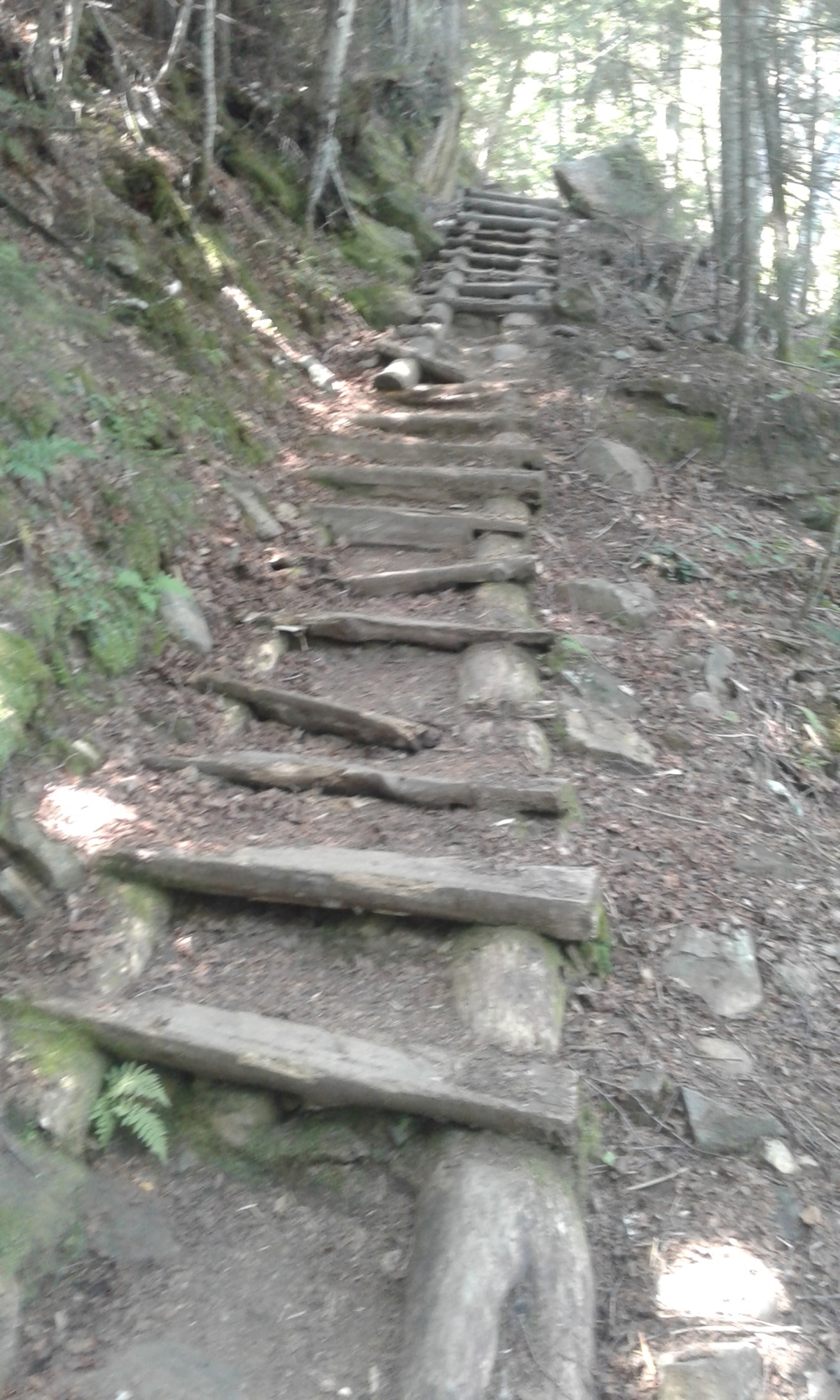 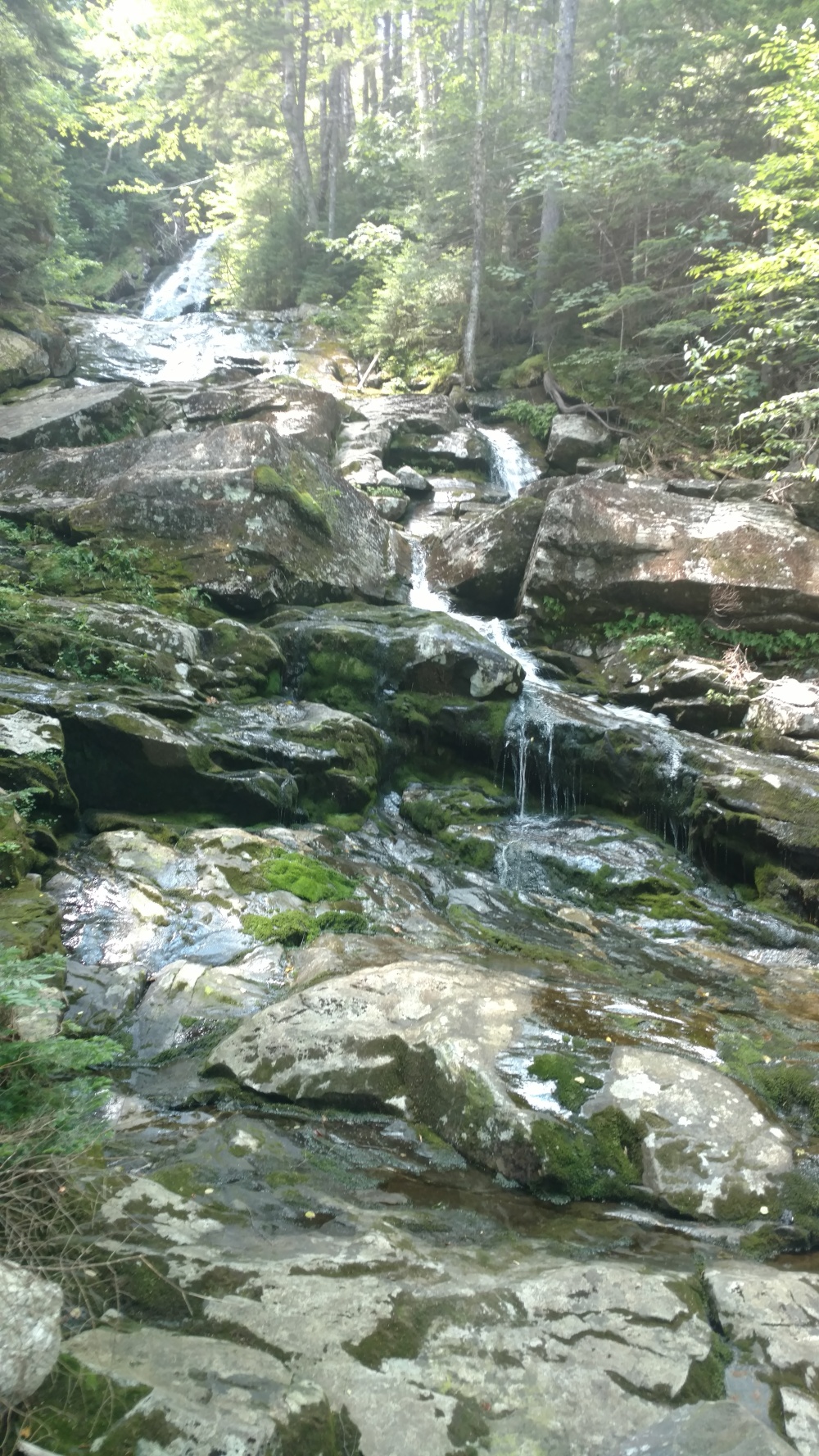 When we were almost to the bottom, the Tramily came to the 1800 mile marker. High Five time!

When we were almost to a road, we passed a trial sign. 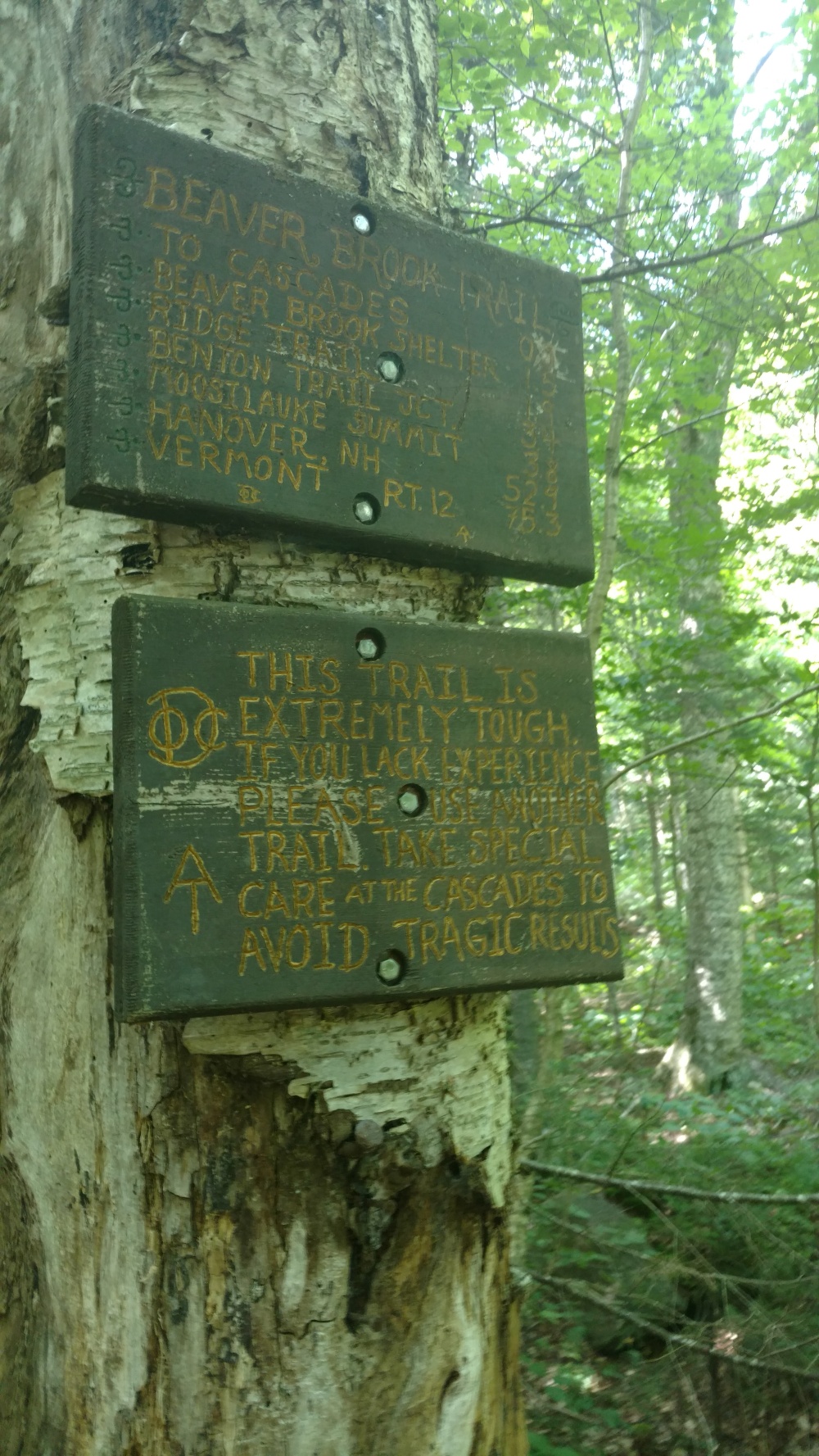 You might have noticed the warning about how the trail was extremely tough.  What might not be so obvious, is that there is no mention of the AT.  In The Whites, the AT consists of many trails that are linked together.  Those trails were commonly referred to by other names.  For a Thru hiker that could get confusing.  We had heard several tales of Thu hikers accidentally going down the wrong trail and having to backtrack.  We would have to pay attention a little more than normal.

After passing the sign, we came to a parking lot where we had arranged to get picked up by the Notch Hostel shuttle.  We were an hour early so we relaxed and enjoyed the good weather.

While we were waiting several other hikers showed up, including Salty Camel.

When the shuttle showed up, a woman named Bookie got out of the van to greet us.  She was super nice and talked to us the whole way to the hostel.

When we pulled up to the hostel, we knew we made the right choice to stay there.  It looked great! 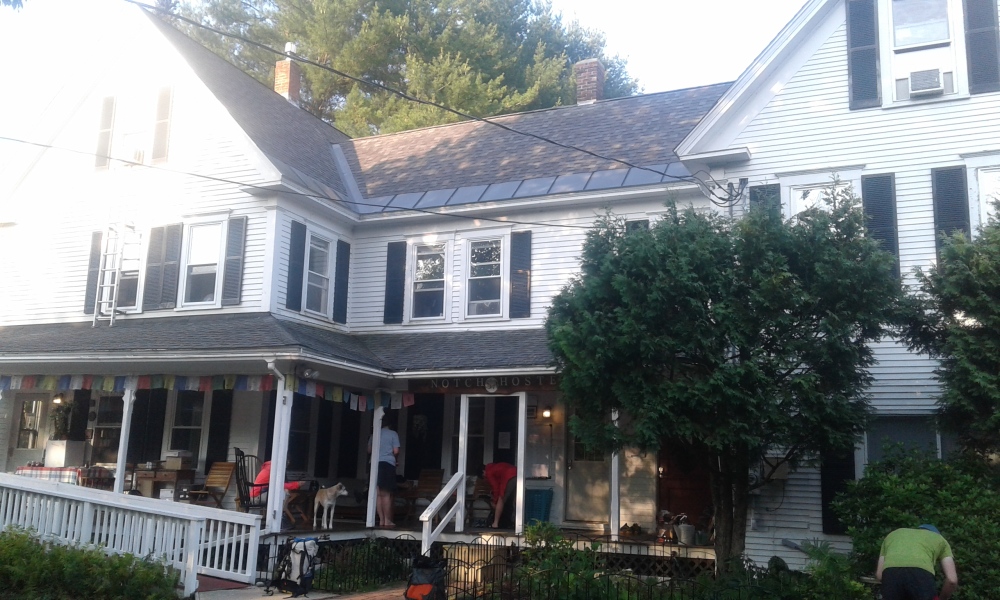 The inside was even nicer.  There were three floors.  The first floor was where the laundry room and a few bunkrooms were.  The second floor was the hang out area.  Consisting of a kitchen, dining room, and living room area.  As well as a few bunkrooms.  The third floor, the floor we were on, had several more bunkrooms.

The Hostel offered a shuttle into town for resupply and a McDonalds runs.  The whole reason we stopped here was because we had to resupply, so we signed up.

Once we were in town, we didn’t have a lot of time until the shuttle would be back to pick us up.  Stoat and I quickly came up with a plan.  I would go to McDonalds and wrangle us some dinner, and he would go food shopping for the resupply.  It worked out well.

When we got back to the hostel all the talk among the hikers was about what was coming up on the AT.  The bulk of The Whites were still ahead of us, and no one wanted to be caught unprepared.