It was very hot and humid today.  The amount of sweat pouring out of my body was astounding.

Most of the day was spent either walking through farmland or the wooded hills of Massachusetts.  Even though there weren’t any views, we still had over 5500 feet of elevation change to hike through.

Around the middle of the day, we came to a field  that we were going to have to walk through.

Before the going through the field, off to the left, was a small structure that said AT Trail Stand.  We went over to investigate. 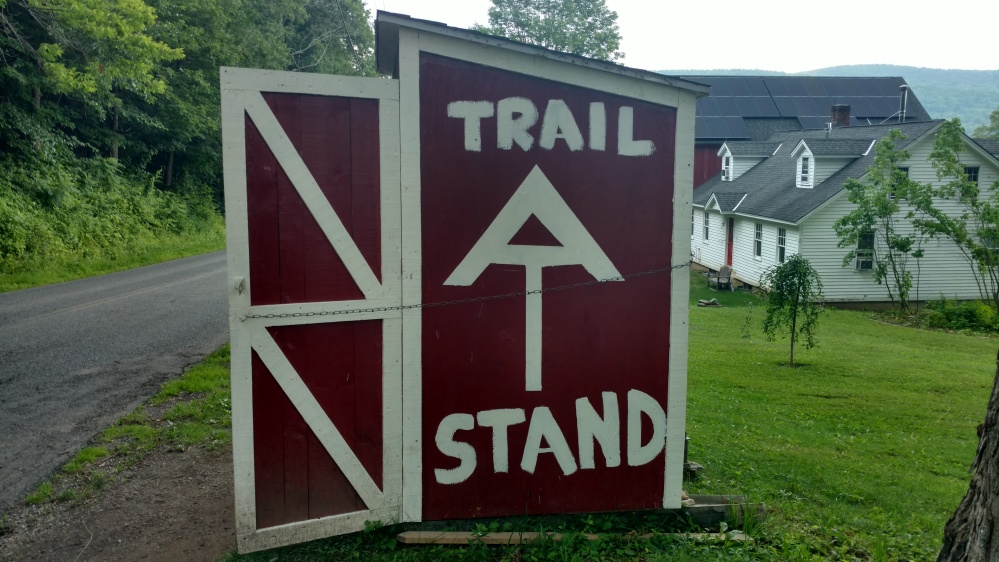 It was filled with all sorts of stuff for sale.  Including ice cold soda! 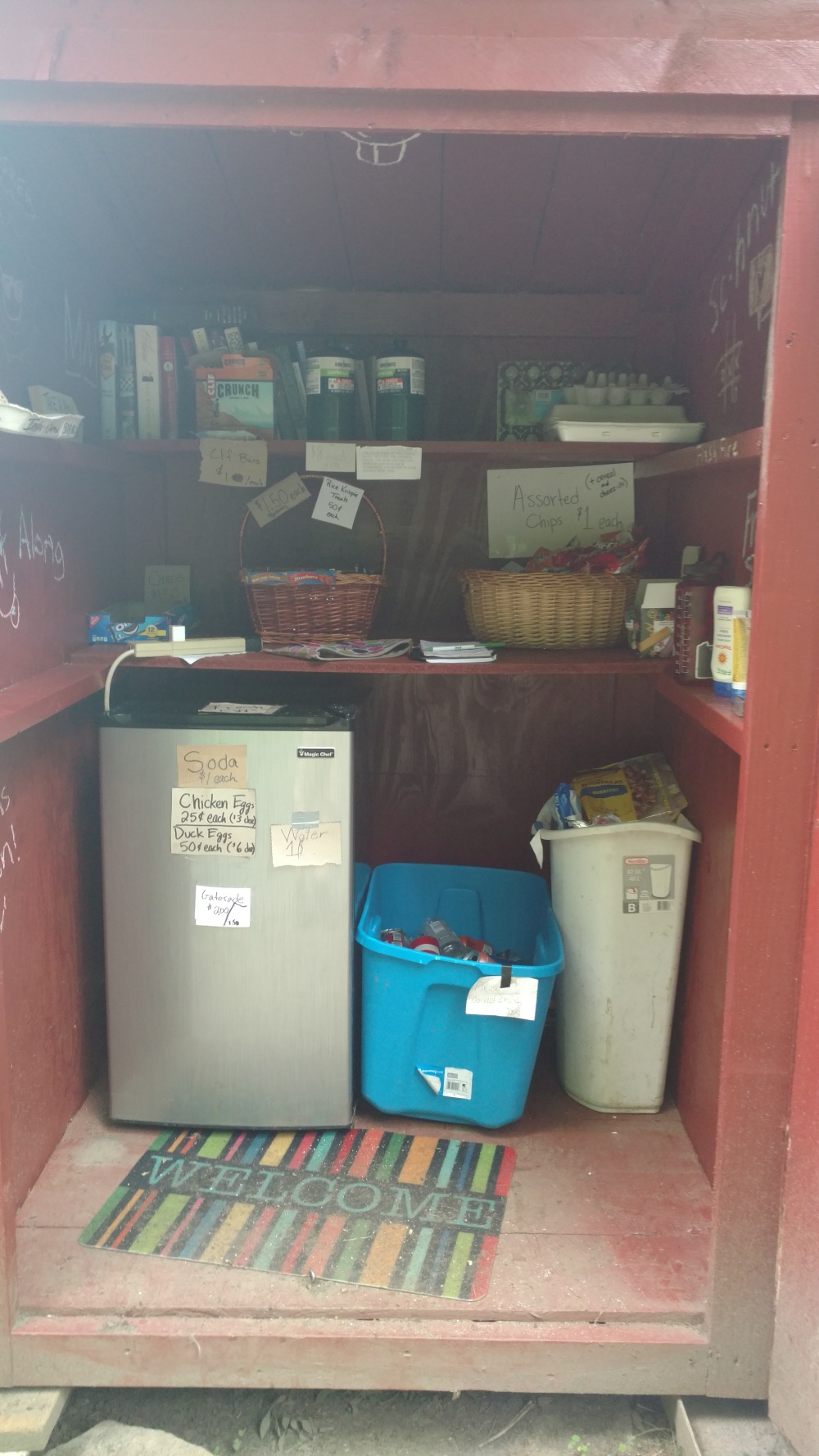 After several cold sodas we felt much better. 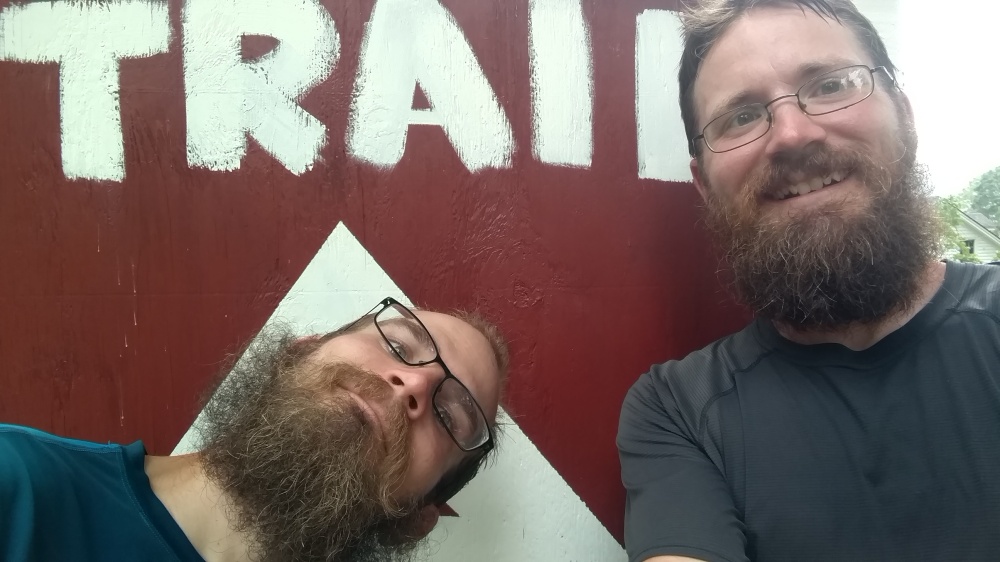 Then it was onward and upward. Then downward. Then upward.  Such is life on the AT. 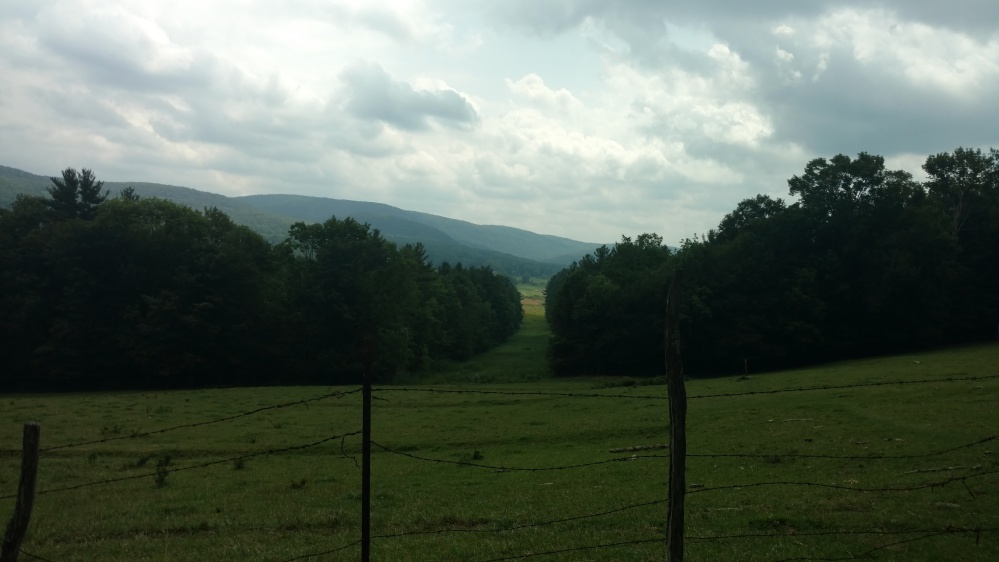 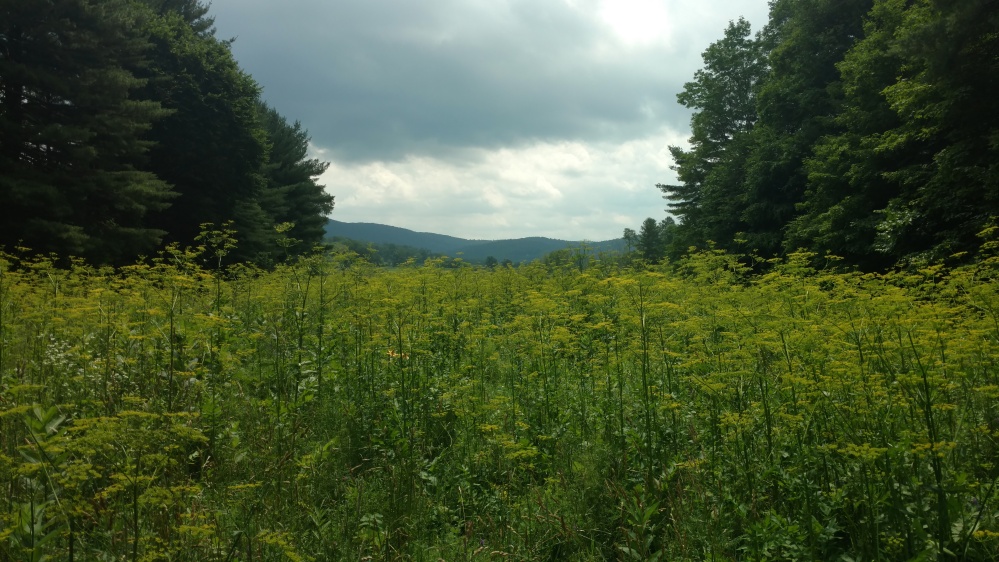 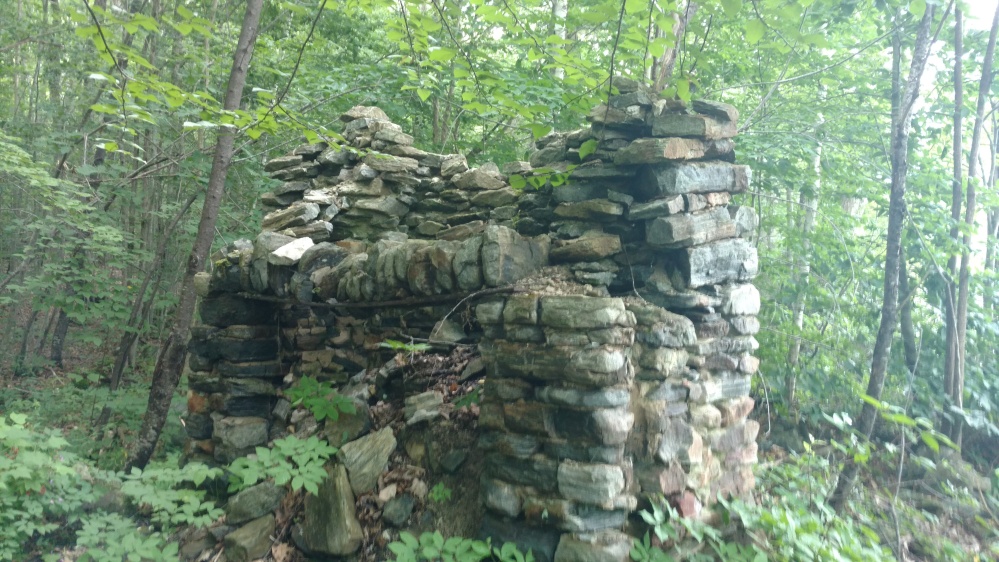 Last night, Zeus and Flashfire said they were going to a cabin at a place called Upper Goose Pond.  The cabin was only a 14 mile hike, while Stoat and I planned on hiking 21 miles to another location.

By the time Stoat and I got to the turn off for the cabin we were tired.  We decided to hike the half mile it took to get to the cabin than hike another 7 miles.  I’m so glad we decided to do that.

The cabin used to be a privately owned lake house.  The owners decided to donate it with the understanding that it would we made available to all hikers passing through.

The cabin was great.  It had a front porch, a living room, a bunk room upstairs, and a pavilion area in the back where we could cook our meals.

When we got there we met two caretakers, Rob and Bonnie, who made sure no one burnt the place down.  They belonged to an association that took care of the place.  Every two weeks or so, new association members would relieve the existing ones.

It seemed to me that Rob and Bonnie were always busy doing something.  They were doing chores, greeting new arrivals and telling them the rules, and talking to all of us.

Zeus and Flashfire were already there when we got there as well as several other hikers.  Zeus, Flashfire, and I claimed bunks upstairs, while Stoat setup his hammock in the woods nearby.  Sleeping in my hammock would have been more comfortable, but I wanted to have the experience of sleeping in the cabin.

Bonnie made chocolate chip cookies for everyone!  They were delicious but they didn’t last long.  I savored every bite.

After we were setup, a storm blew through.  Stoat and I watched the rain fall from the dry comfort of the front porch.  Sitting on a porch, listening to the rain is an experience we always enjoy, and this time was no different.

After the storm rolled through, the temps and humidity dropped, and the sky cleared.  Rob asked for volunteers to help him refill a lot of one gallon water jugs from a spring.  To get to the spring involved taking a canoe ride.  I immediately volunteered Stoat and I. 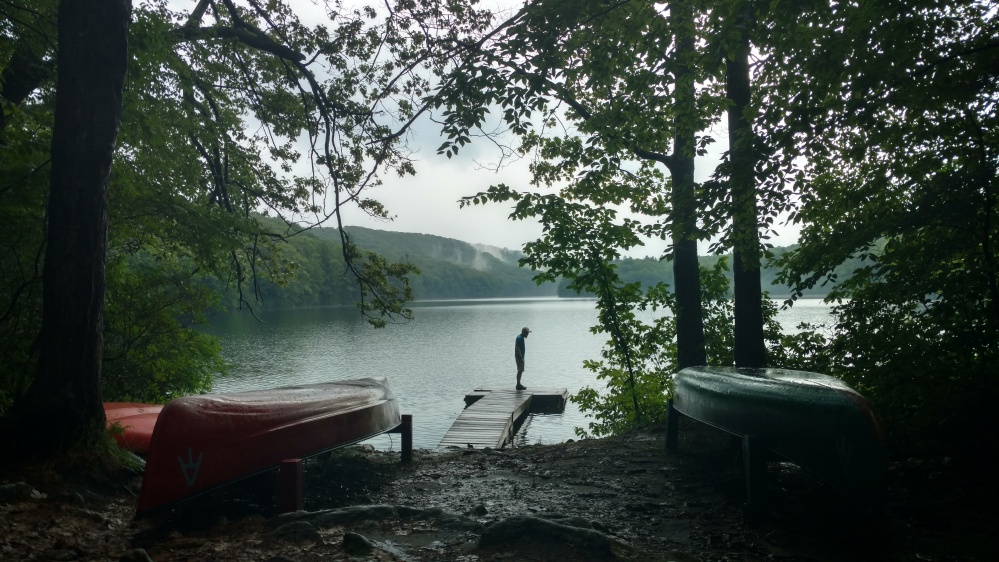 When Rob said we were going to refill the one gallon jugs I didn’t realize that there were 30 to 40 of them.  I din’t mind the work, it’s just that the three of us barely fit in the canoe.

We paddled over to a far bank and beached the canoe.  The three of us formed a bucked brigade and filled and loaded the jugs quickly.  Then we returned to the cabin with our quarry.

It felt great to get out on the water.  It felt even better when we were told that we could take out the canoe by ourselves.  There was another canoe available, so Zeus and Flashfire joined us out on the lake. 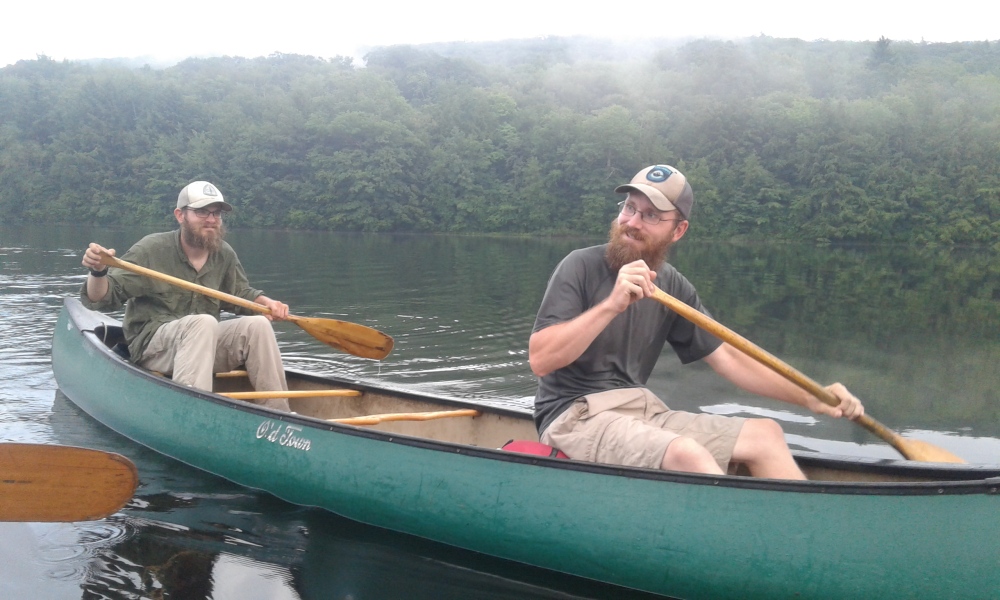 It was so beautiful out on the lake.  The fatigue from hiking in the heat and humidity was forgotten.  I felt like I was on vacation.  And to think we would have missed out on the whole experience if we stuck to our 21 mile plan.

I don’t understand why anyone would want to hike the AT quickly.  To me, that’s like running through an art museum just to get to the other side.  Whats the point of doing it, if you don’t  stop to enjoy and explore the beauty that’s all around you?