It was a beautiful day.  The humidity had gone way down, the skies were clear and there was a cool breeze.  It was a perfect day for hiking.

We planned to do a short day.  From experience, we had found that we could never get out of  town at a decent time.  We came up with a rule that made planning a big first day unacceptable.

The trail was generally a little less rocky today. 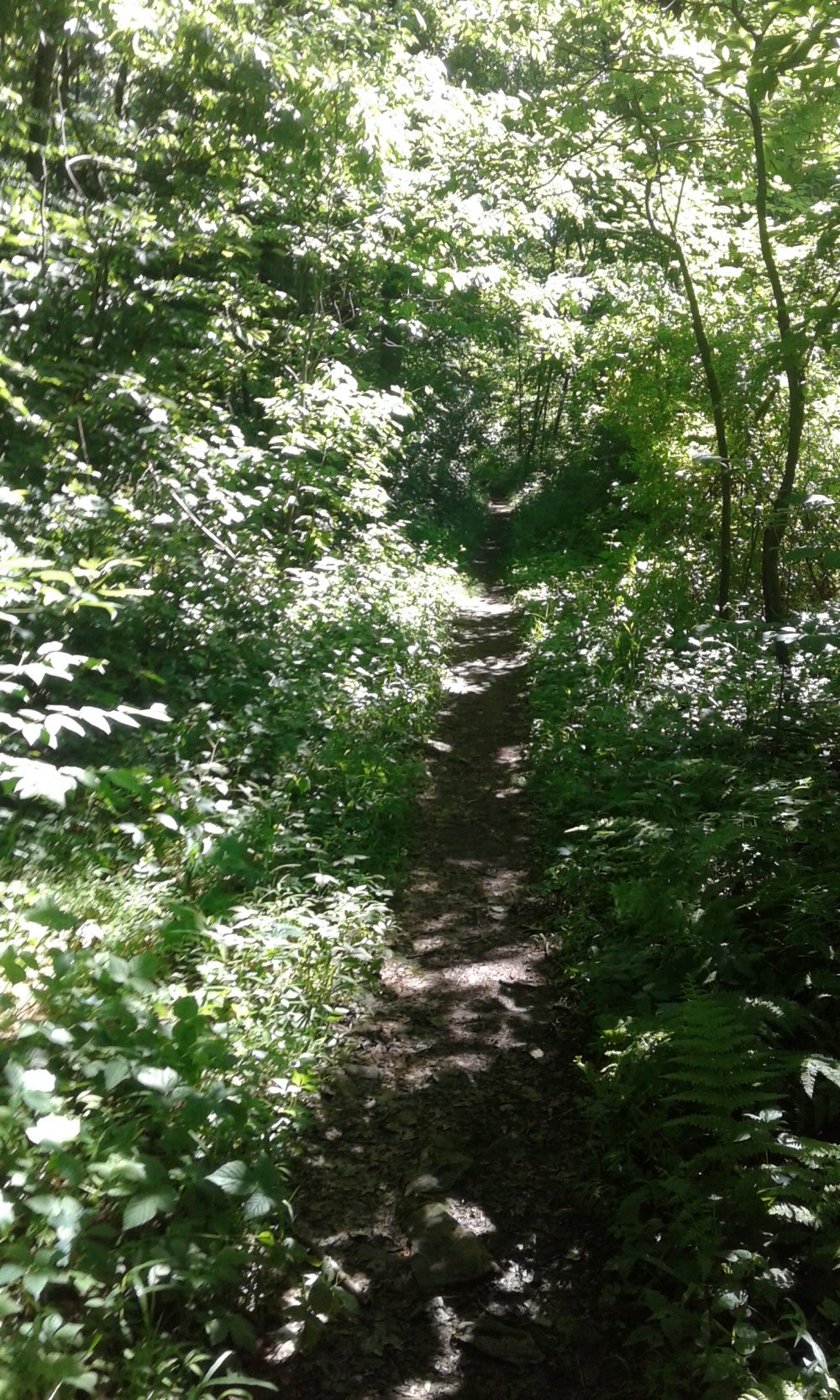 There were still several rocky spots.  Pennsylvania wasn’t completely done with us yet 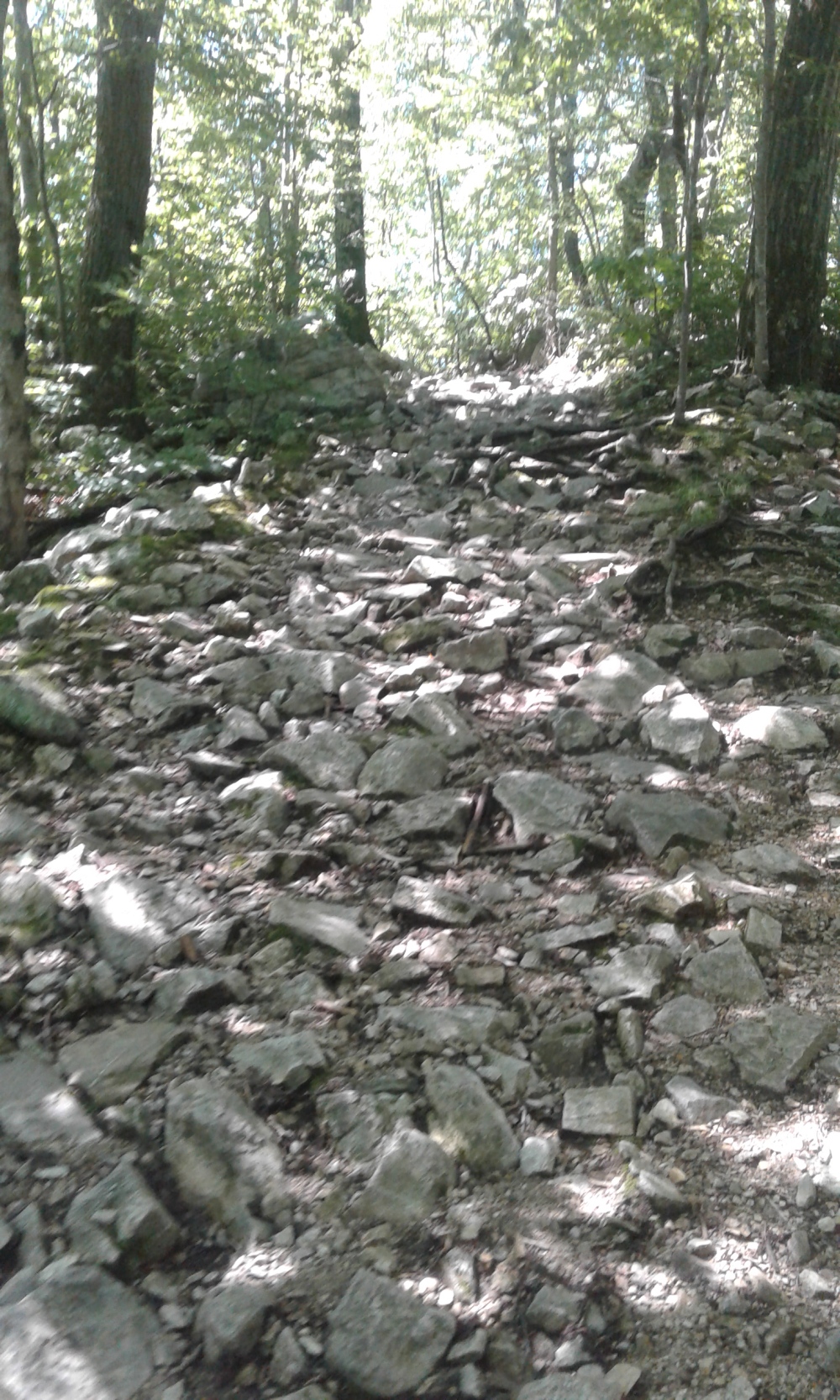 At The Pinnacle, Stoat and I stopped for lunch.  The views of the surrounding farmland were beautiful.  What was more impressive, to us, was that we could see the hills of NJ off on the horizon.  After 105 days of hiking we caught our first glimpse of our home state.

Towards the end of the day, Stoat was walking a few feet ahead of me when all of a sudden two things happened simultaneously.  Stoat jumped higher and farther then I thought possible, and a loud rattling sound came from the spot he just vacated.

Stoat had almost stepped on a rattle snake.  The section of trail was fairly flat and rock free so we were moving pretty fast.  It was lounging on the side on the trail and Stoat only saw it at the last second.  Thankfully, the rattle snake dodged quickly into the brush, instead of towards Stoat.   For the rest of the day, every branch and exposed root looked like a snake.

Our day came to an end at the Eckville Shelter. 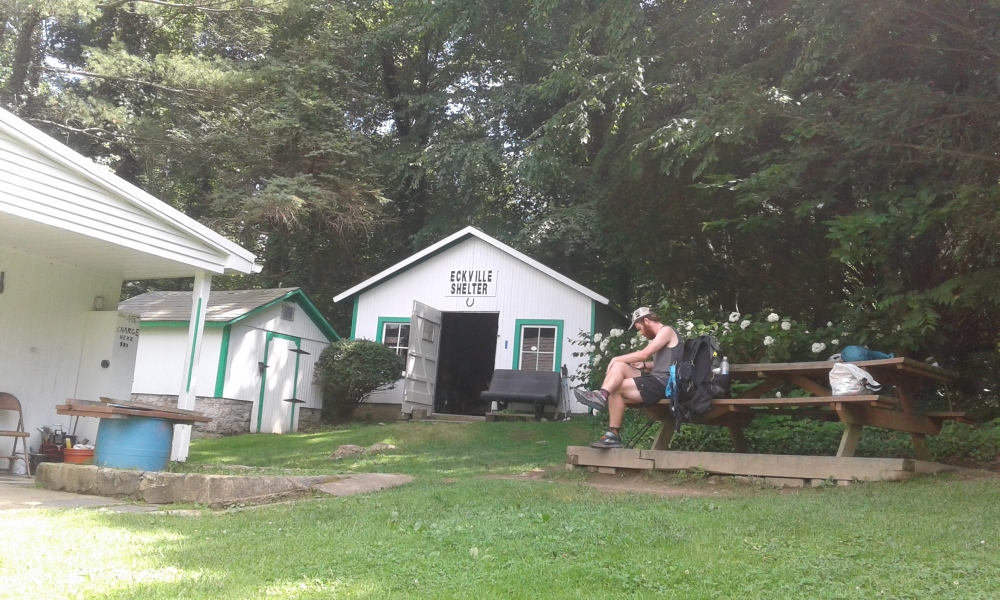 The Eckville shelter was a fully enclosed building that had a flush toilet, a solar shower, camping areas, and a caretakers house.

Inside the shelter was a list of questions that were commonly asked to the caretaker.  Besides providing the answers to the questions,  the notice had the general vibe of  “Bother the caretaker at your own peril!”

While the Tramily was lounging around a few section hikers stopped in.  One of them used the solar shower.  A few minuets later, water was shooting out of the top of the reservoir barrels.  Flashfire walked over and knocked on the door of the caretakers house.  When the caretaker came to the door and saw what was happening he started to shout, “Turn the F-ing thing off! Who the F- did that! Turn the F-ing thing OFF!”

The section hiker froze in panic.  I quickly ran over to see if I could figure it out before the caretaker kicked everyone out.  There was a valve on the side of the shed that looked like it was hooked up to the barrels.  I turned it off and it seemed to help.  The caretaker calmed down slightly and said that the water would still come out for a while.  Then he went back inside.

The way he was shouting for an immediate result, without any explanation of how to achieve said result, was a little jarring.  I think it was the first time on the trail that any of us had heard anyone yelling out of anger.

A little while later Cash and Songbird came by.  They were going to keep hiking a little farther, but decided to eat dinner with us at the picnic table.  While we were eating, the subject of the humming birds at the shelter came up.  A few minutes later, the gruff caretaker came out of the house with a clipboard.  He said that he had some information on humming birds if anyone was interested, set the clipboard down, and went back inside.

One of us picked it up and came back to the picnic table.  Songbird read it out loud so everyone could hear it.  As she was reading it, several of us noticed the time stamp from when it was printed.  It was printed within the last ten minutes.  I guess the caretaker wasn’t a bad guy after all.  He just wasn’t very good at communicating.

After Cash and Songbird left, a woman stopped by with a water melon.  Trail Magic for dessert!

Stoat and I hung our hammocks up in the camping area across the street and called it a day.  We had a long day planned for tomorrow.  Which was fitting because it was the longest day of the year. 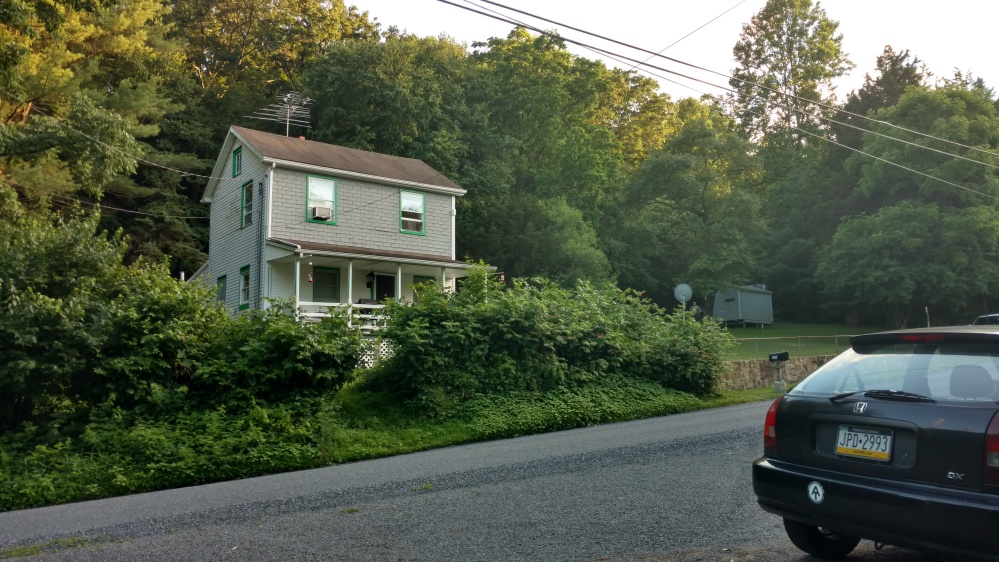 It would also be Hike Naked Day….