The Tramily was eating breakfast at the hotel when Flashfire brought up the idea of taking a zero.  Zeus and Stoat were agreeable but I was a little reluctant.  We had taken a zero just six days prior.   I needed to do some calculations first.

I had become known in the Tramily as being a little pedantic.  For example: When someone would say we had to hike 20 miles I couldn’t help mentioning that it was actually 20.5 miles.  Flashfire, on more than one occasion,  accused me of being more German than she was.

My name began to be used as a figure of speech.  If someone was being a little too meticulous, someone ,usually Flashfire, would say, “Don’t be so Straps!”  I wasn’t offended at all.  I saw it more as a badge of honor than anything.

There were two things that I had to figure out before agreeing to zero.  The first was how many miles had we done since our last zero.  The answer was 105.3 miles.  Anything under 100 miles would cause me a little concern.  I didn’t want to get into the habit of taking too many zeros.

It took a little while to figure all that out.  While I was going over all the info I could find, a weather report came on the TV.  There was a severe weather warning for the area.  High wind, thunderstorms, and hail were predicted.  I said “Hail no, we’re not going to hike in that!”  Well, no I didn’t…but I wish I did.

Eventually I decided that taking a zero wouldn’t mess everything up.  After leaving Hamburg we would have to do 89 miles in five days to stay on schedule.  That was doable.

For the rest of the day we tried to do as little as possible.  Stoat walked over to Cabelas and bought a new pair of shoes and I got a hair cut.  Other then that, we ate, and relaxed in the room.

When I was in the waiting area at the hair salon,( I dont know how anyplace that charges 12$ for a hair cut calls themselves a salon.  It’s more like a discount hair cutting franchise, but all this is beside the point.) I noticed that one of the hairdressers was attractive.  Plus, she was about done with her customer.  I thought that I might be able to impress her with some hiking adventure stories while she was cutting my hair.  When she finished with her customer, she came up to the front desk.  She looked at the customer sign up sheet, took one look at me and seemed to make a decision, she said ” I’m going to lunch”, and fled the room.

I found out from the woman who wound up cutting my hair that several hikers had shown up there fresh off the trail.  They hadn’t bothered taking a shower or even changing their clothes.  Most of them had been hiking in the summer heat for days without showering.  How they expected anyone to get near them, let alone touch their greasy hair, was beyond me.

On my way back from the “salon” the wind picked up and dark clouds moved quickly towards my location.  It was going to storm any minute and I was not going to make it back to the hotel on time.  Luckily there was a Mcdonald’s very close by and I ducked in there just as it started to rain.  I took it as a sign and ordered a second lunch.

While I was “trapped” at the McDonald’s, the rest of the Tramily was back at the hotel watching the storm come though. 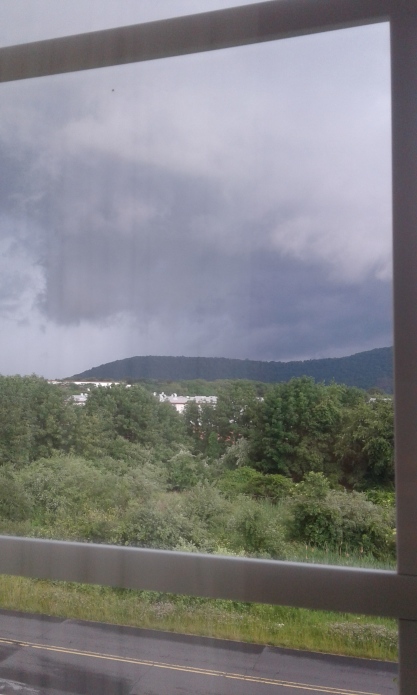 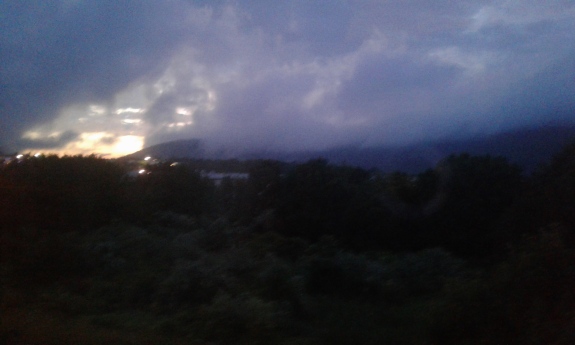 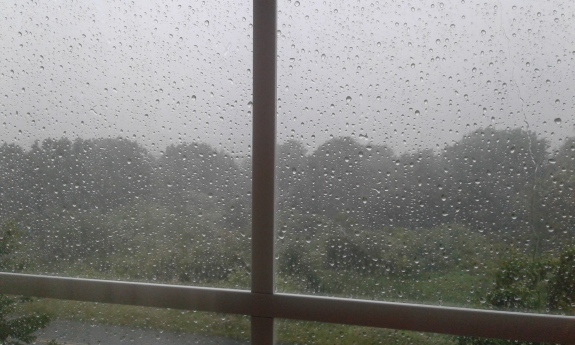 Zeus made a short video documenting the event.

I eventually made it back to the hotel.

For the rest of the day we barley left the hotel room.  We were going to have a few rough and rocky days ahead of us.  Relaxing was our top priority and we took it very seriously. 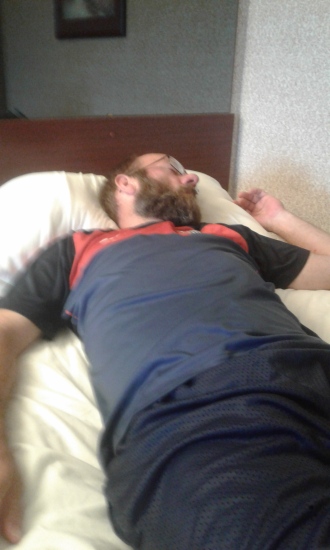 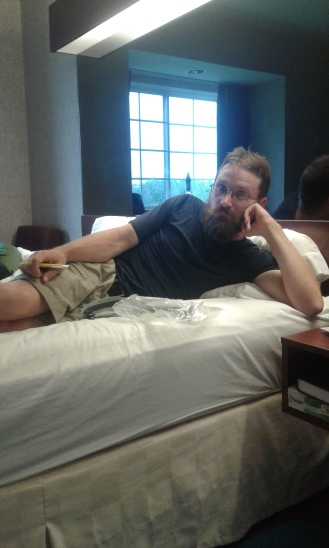 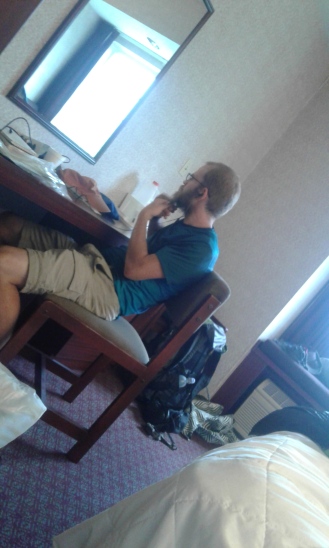 (All photos in today’s post were courtesy of Flashfire)