Today was the first time I found hiking the trail boring. The terrain was mostly flat and there weren’t too many views.  Thankfully there were several historical areas that helped keep my morale up.

The first historical area we came to was Gathland State park.  Gathland was built by George Alfred Townsend.  Townsend was a civil war journalist who went by the pen name Gath.   There was an empty tomb on site that was meant to be his final resting place.  Gath died in New York and was buried in Philadelphia.  His daughter sold the place, and that was that.

What Gathland was most famous for was its huge memorial to all Civil War Correspondents.  Of course, we didn’t know about any of that until we turned a bend and suddenly we saw what looked to be some sort of arch.

We went over to take a closer look.

Across the street we passed some ruins and then the trail headed back into the woods.

Seven miles later, just as we got to the Dahlgren backpacker campground,  it started to pour.  Thankfully there was a bath house with a small overhang that gave us a little cover from the rain.  We saw no point in soaking ourselves on the trail if we didn’t have to.  Scarecrow had been hiking with us for most of the day, and the three of us took cover and decided to wait out the storm.

While waiting out the storm we discovered that the bath house was open.  Inside they had outlets where we could charge our phones, toilets, and showers with , gasp, hot water!  I decided to use every amenity.

While taking a hot shower the sounds of rain hitting the tin roof echoed a few feet from my head.  It made me feel like I was taking a shower in a hot water rain storm.

The storm eventually passed and we got back on the trail.  After taking that hot shower I felt like a new man.

Three miles later we came to the Washington Monument.  The original one.

Built in 1827, the original Washington monument was built by the local town people in two days.  It was restored in 1882, again, by the locals.

We climbed up the spiral staircase to see the view at the top.

After taking in the view for a few minutes we decided to get going.  As we were leaving, Stoat said, ” That’s the Washington Monument?  It doesn’t look like him at all!”  I cracked up.  An older gentleman standing in dress clothes nearby scowled at us.  I guess not everyone shared our sense of humor.

Zeus had let us know via text that he and Flashfire would be staying at the next shelter.  Stoat and I didn’t feel like staying there and opted to stay at a campsite 1.5 miles beyond the shelter.

When we got there, we knew we made the right decision. There were many places to camp and the view was really nice.

The area was filled with blooming mountain laurel which added a nice touch to an already pretty area.

Stoat and I setup our hammocks and then I went back to the cliffs to eat dinner.  Stoat wanted to wait a little to eat so I had the cliffs to myself for a while. 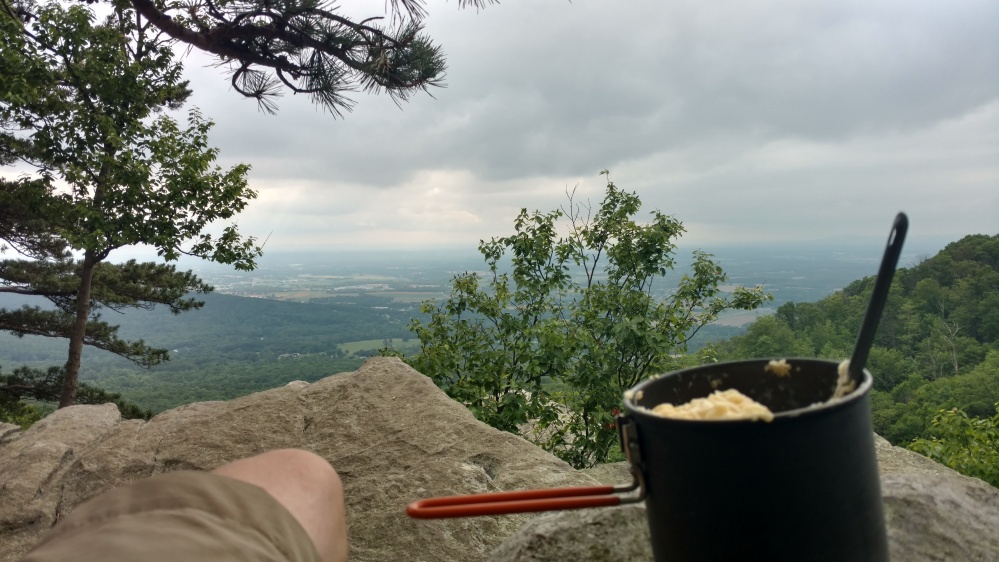 As I sat there, I realized that any of the feelings of boredom I had experienced throughout the day were completely gone.   I was in a state of complete contentment rarely achieved in  “normal” life.   As I sat there looking off the cliffs and eating my bland dinner out of a pot,  I couldn’t think of a place I rather be.