The weather was perfect for hiking. My feet were feeling better and the miles flew by.

We crossed Skyline drive ( a continuation of the Blue Mountain Parkway) several times throughout the day.  Every time we crossed the road and went back into the woods we would see sign the said, “Entering Wilderness area.”  We got a kick out of that.  We had been in wilderness areas already and this wasn’t even close.  We could see the road from where the sign stood.  “Can you hear that?”, we joked.  “That’s the call of a wild Honda Civic.”

Zeus and Flashfire had left earlier than us in the morning so we found ourselves hiking with some new (to us) hikers.  Up until lunch we hiked alternately with Jaws and Pilgrim.   Jaws had recently gotten out of the Israeli military.  He was a lot of fun to hike with but he hit on every female we met.  Pilgrim  was a nice guy and a little on the quiet side.

The first goal of the day was to visit the Big Meadows Wayside.  In the Shenandoahs they had what were basically rest stops along Skyline drive.  These rest stops had a diner, sold snacks, and of course  a gift shop.  The rest stops were referred to as waysides and there were several of them along the way.

The seven miles it took to get there pass quickly.  The only interesting things that we saw were one nice view and we saw  a baby fawn not too far from the trail. 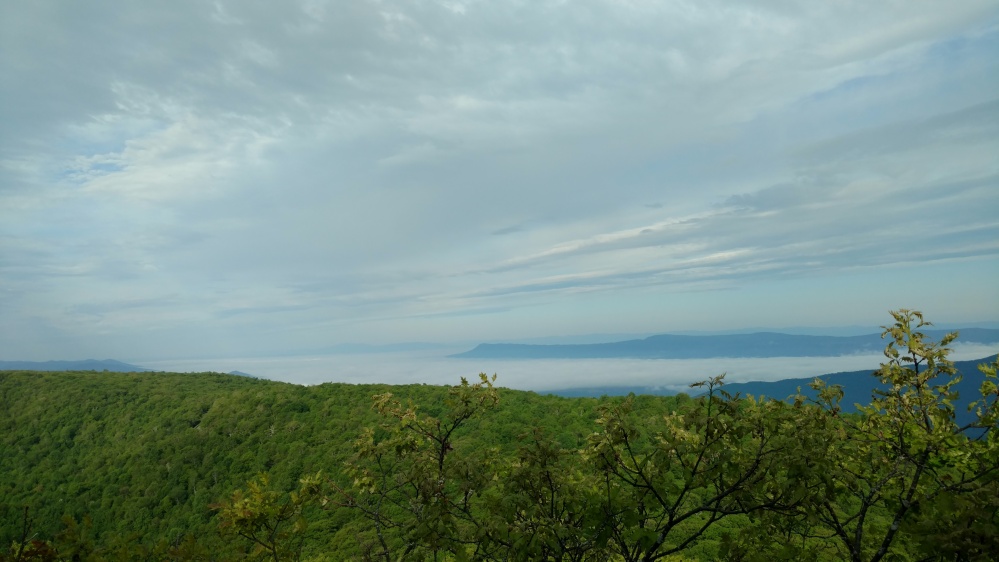 Stoat and I got second breakfast at the Wayside.  While we were eating, Pilgrim showed up.  He told us he had just seen a bear attacking and eating a fawn.  It was most likely the same fawn that we had seen earlier.  While we found the news a little sad, we knew it  was also the way of the natural world.

After a while we went outside and sat at a picnic table.  Eating snacks and talking to other hikers.  Bottles and another female hiker named Sea Wolf had shown up.  Sea Wolf was waiting for her dad to pick her up so she could get off trail for a few days, go to a job interview, and then get back on the trail.

It was nice to get to know Bottles and Sea wolf.  It felt like we were making new friends.  Unfortunately Sea Wolf was getting off trail for a while and Bottles had foot pain the limited her days to 14 miles or less.  We would probably never see them again.

We stayed at the wayside way too long.  It was only the threat of not making it to the Hut before dark that got us going again.

After we left the wayside it rained for a little while.  Thankfully it was only a passing shower.

So far the Shenandoahahs were a little disappointing.  It seemed like most of the good views were either at roadside lookouts or so far off the AT that it wasn’t worth checking them out.  Most of the time we were just  walking in a forest.  The AT isn’t called the Green Tunnel for nothing.

Ten miles after the wayside we came to Little Stony Man Cliffs.  It was the best view in the Shenandoah’s so far.

The view was spectacular and wind was refreshing.  We hung out there for a while and enjoyed the view.  I took my shirt off to air it out and feel the wind on my skin.  Some college age girls went bye and at least one of them had kind of a disgusted look on their face.  At first I was a little confused.  I didn’t look bad without my shirt off.  I mean I wasn’t going to win any kind of competitions, but I was in shape.  Then I remembered I had a giant homeless mans beard and I probably smelled homeless too.  Oh well.

By the time we got to the hut it was 7:30 PM.  Zeus and Flashfire were already there and they were excited to see us.  Every time we came in to camp  they always let out a cheer and today was no different.  My spirits were lifted every time they did that.  It meant a lot to me, but for some reason I don’t think I ever told them.

The only other hiker there was Mary Poppins with her dog Arty.  We hadn’t seen her in several hundred miles so we caught up a little as I ate my dinner.

By the time dinner was over I was ready for bed.  We had just hiked  69.1 miles in three days.  A major accomplishment for our Tramily.