The terrain was much easier today and the miles flew by.  The only view for the day was a quick look back at the Grayson Highlands.

At the lookout a female hiker stopped to chat.  Stoat asked her how many days she was out for.  As he was asking that question I noticed a thru hiker badge on her pack.  She said, ” I’m a Thru hiker!”  I cringed.  She took it in stride though and turned out to be pretty cool.  Her name was GG and she was doing much bigger miles than we were.

After she left Stoat said, ” Why did I say that? Uh, that was embarrassing!”  It was then that we came up with a rule to assume everyone was thru hiking even if they obviously were not.

Eventualy we got to a larger bridge.  Godzilla and Turkey had just gone for a swim and were getting ready to leave.  We talked to them for a quick minute before they headed out.  After they left we decided to have lunch.

Eventually we caught up to Godzilla and Turkey and hiked with them the rest of the day.  Stoat showed them how to identify bog peanut plants and how to pick and eat them.  Godzilla became obsessed, stopping quite often to pick a few.

Our day came to an end at the Partnership Shelter.  The easier terrain allowed us to flex our Thru hiking muscles. We did 19 miles in 7 hours without much effort.

Partnership shelter was a two floor shelter situated less than a five minute walk from the Mt Rogers visitors center.  The visitors center was run by the national park service.  They had all kinds of info about the park and, more importantly, they had a pay phone that thru hikers could order pizza from.

There were a lot of Thru hikers at the shelter.  It was a popular place due to the Pizza and the cheap shuttle that would pick up hikers and bring them into Marion VA.  Zeus and Flashfire were there.  Godzilla and Turkey were spending their last night on trail there. A hiker that we had seen several times since Woodchucks named Scarecrow camped nearby.  Plus there were a whole bunch of hikers we met once or twice before.  Here’s a quick list:  Grumpy, Tiny Tim, Sticks, Goddess, Squeaks, Piper, Orange Crush and many more.

Almost everyone ordered pizza. Pizza could be ordered from Pizza Hut or a local place.  Zeus ordered pizza from Pizza Hut instead of the local place.  When I questioned this, he said something along the lines of “It’s the same thing.”  I just would not stand for that. I’m from the pizza belt of the US.  Where what he said amounted to sacrilege. And so began the great pizza debate of May third.

Stoat and I treated Godzilla and Turkey to whatever they wanted from the pizza place.  It was their last night on trail and we wanted to give them a nice sendoff.  Being good citizens of the pizza belt themselves they got a meat lovers pizza and a calzone.

Flashfire started a fire and people gathered around.  At one point I counted 20 people hanging out near the fire. 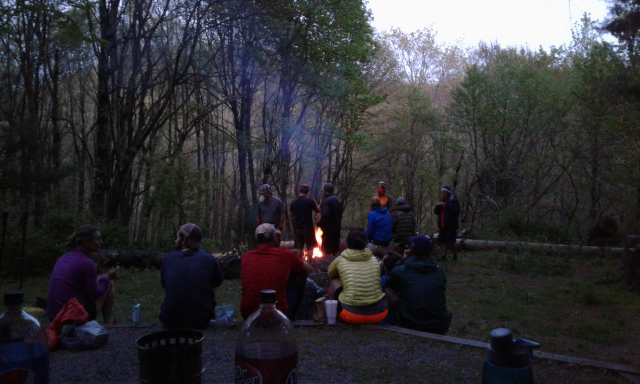 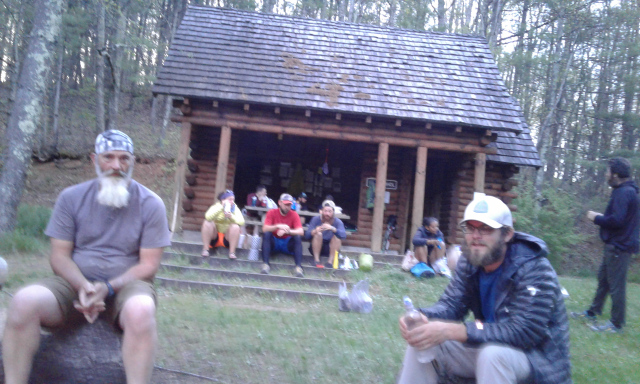 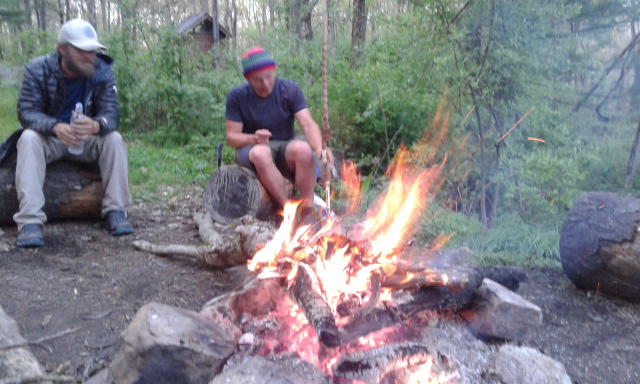 Several people had just come back from Marion and had brought some adult beverages back.  The crowd never got rowdy but at one point I broke away to enjoy the fading light in a little more solitude.

There was a small pond not to far away and I hung out there for a little bit. 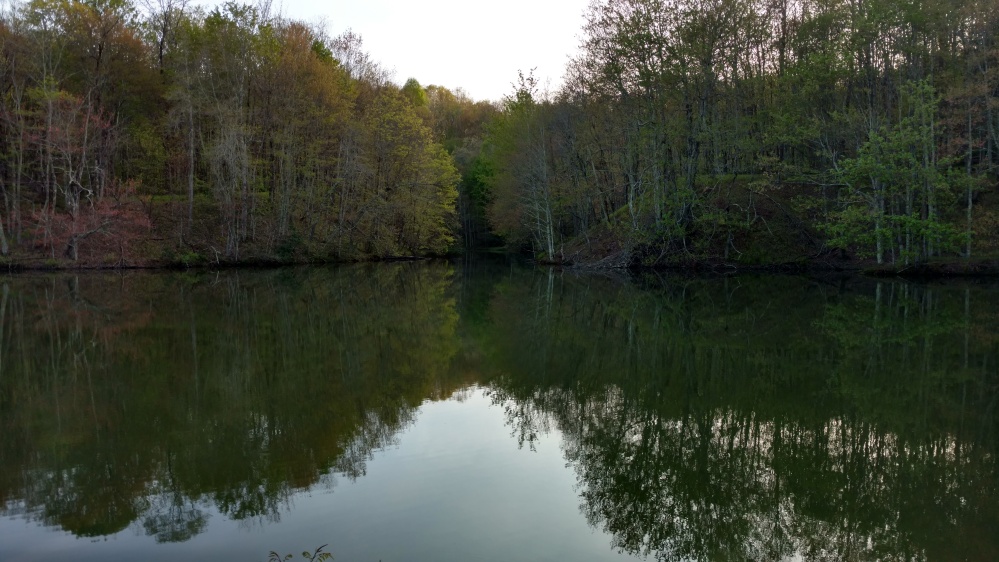 It was a great night.  Everyone was having a great time conversing with each other. The, “I would walk 500 miles” song was sung several times,  or at least the part everyone knew was sung several times.  At one point I was sitting next to the camp fire talking to Goddess, who happened to be attractive,  about her mountain climbing adventures.  I remember thinking, “I don’t think it gets better than this.”

The conversations lasted longer into the night than usual, but no one seemed to mind.