Cereal, fruit, and coffee were served for breakfast at the hostel.  While I was eating I asked one of the female Southbounders if she was ready for her hike to be over soon.  She paused for a minute and her eyes started to tear up a little.  Then she said “No. Not at all.”

When we got back on the trail we made an unpleasant discovery.  The lake that the trail went around was flooded.   There was a high water trail that was available for such  a case but we really didn’t want to take it.  A hiker named Slim Shady passed by and let us know the trail was under several feet of water.  A minute later Zeus texted me to tell us not to even try taking the AT.  He tried to do it anyway but wound up turning back when he deemed the water too deep.

The high water trail was actually a road.  The road paralleled the trail for the whole time we were on it.  We could see the tops of picnic tables sticking out of the water.  In other places we could see where small wooden bridges on the AT were almost completely under water.  Even though we could see the trail wasn’t passable it really bothered us that we were missing part of the AT.  The high water trail wound up paralleling the AT so that made us feel a little better.  We weren’t cutting out any miles or making the trail easier.  We just were on a parallel path.  Stoat and I still felt a little like we were “cheating”.

After we passed the flooded section of the trail we were treated to several nice views of Watauga Lake. 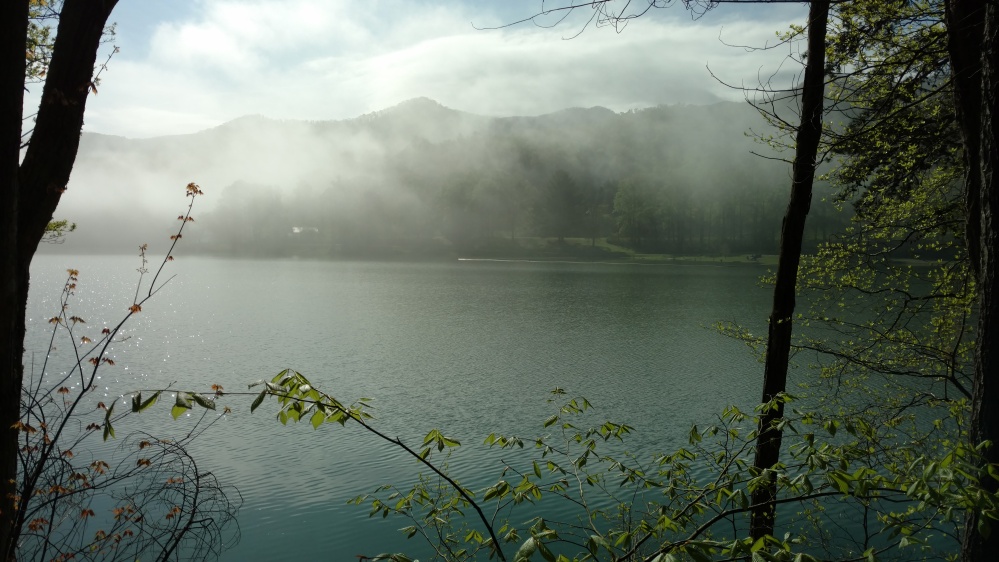 The trail eventually led to the dam that created the lake. After the trail left the dam it began to climb.  As we climbed so did the temperature.  It felt like we were exerting more effort than the terrain required.  Our bodies were not ready for the heat.  The day before the temps were in the low 50’s, today they were in the low 80’s.

When we got to the top of one of the climbs we saw Subway taking a rest.  We decided to join him.  He was having a harder day than he expected as well.  The overall elevation change from Watuaga Lake to the top of the ridgeline we would be walking on for the day was only about 1400 feet but the trail undulated a lot in between.  It felt like that for every two steps that brought us up there was one step that brought us down.

Subway got a phone call and we decided to hike on.

Once we were on the ridgeline we had some nice views down to the lake below.  We found a shady spot to stop for a snack.  Stoat tried take his shirt off.  Because it was soaked through with sweat, it stuck to him like a wet sock.  He was struggling for a few minutes.  I helped by taking a picture.

About ten miles into the day we had lunch at Vandeventer shelter.  There was a rock outcropping around the back of the shelter that had a great view of the lake.

Around the time we were eating lunch, Godzilla and Turkey were setting out on a 40 mile challenge.  They wanted to hike the remaining 40 miles top Damascus Virginia within 24 hours.  Then planned on starting late in the day and hike through the night to avoid the hottest weather. That also allowed them to get to Damascus before the all you can eat pizza buffet closed for the day.

Godzilla and Turkey had started the trail together and were section hiking for as long as time, and their wallets, allowed.  They weren’t sure how much farther they were going to able to hike.  If they wound up having to leave the trail in Damascus at least they would go out in a blaze of glory.

After countless more ups and downs we reached the Iron Mountain Shelter.  There were a lot of hikers there but it wasn’t overcrowded.  Sir Poops Alot, Zeus, Flashfire,  Subway, Mary Poppins, and a newly met Piper.  Among many others.

All of us agreed that the trail was a lot harder than the guidebook indicated and the heat was overbearing.

We wanted to make a fire so several hikers gathered some wood.  Zeus said that Flashfire would start the fire for everyone.  She lived up to her name and got that fire started in a flash. 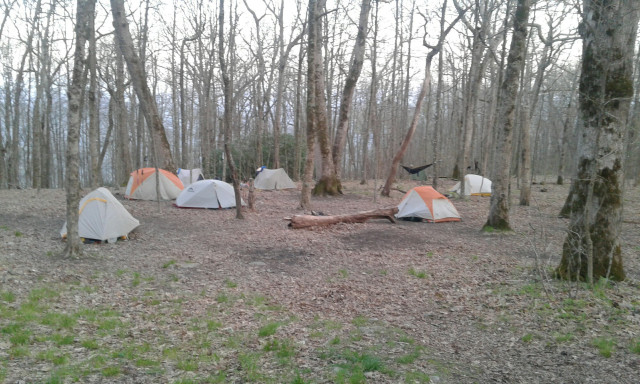 The sun started going down and lights started to appear in the valley.  It was a town!  I  began to imagine all the people coming home and going about their life.  Cooking, watching TV, taking out the trash, taking care of the kids, getting ready for bed, getting ready for the night shift.  The contrast between how they were living and how a small group of people up on the mountain were living was striking.  I was reminded again how lucky I was to be hiking the trail.  How certain decisions in my life allowed me to hike the trail with my brother.  How easily I could have never set foot on the trail in the first place.  Always looking back at the trail as something I should have done.