We lingered at the hotel a little longer than we should.  There was rain in the forecast and we were in no rush to deal with that.  Eventually we called a guy who gave hikers rides back to the trail head.  He was a really nice guy and he only charged 7$ a car load.

Once back on the trail we crossed a lot of streams that cascaded down the mountain. There we started our 2700ft climb.  The climb was spread out over 11 – 12 miles so it wasn’t too bad.  Although, it was steep certain spots.

Stoat and I stopped for lunch and Bear Bait joined us.  We got to know her a little better and find out how she and Drop Top met.

Drop Top was in the supermarket in Franklin N.C. and Bear Bait stopped to talk to him about something and they had been hiking together ever since.  Drop Top told me later that he was convinced she was hitting on him.  A fact the Bear Bait playfully denied when she heard Drop Top say it.

After lunch it was on to Beauty Spot.  Bear Bait had been there before and told us it was worth the effort.

On the way Stoat and I stopped at a gap between trees that was created by a power line running through the area.  Was this the beauty spot? It wasn’t very impressive.  Bear Bait came walking up the trail behind us.  We asked her if this was the spot.  “Gosh no! That would be terrible!”, she said.  We went on.

The trail got steeper and it started to get hot out.  Stoat and I tucked a bandana under our hats to prevent sun burn on our necks.  We looked like Forrest Gump but it worked.

It was pretty obvious when we reached the Beauty Spot. 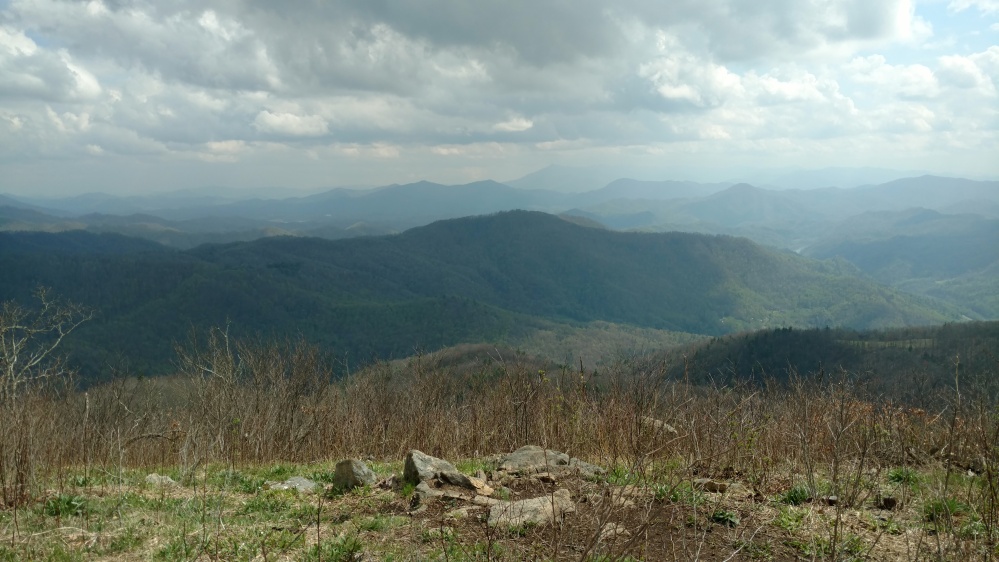 Beauty Spot was a big flat area like Max Patch but with trees here and there.  Bear Bait passed us while we were gawking at the view.

After a little bit we decided to hike the remaining half mile to the campsite.  When we got there, Zeus was there but there wasn’t any sign of Bear Bait.  Zeus said he hadn’t seen her at all. That was a little weird because she told us she was meeting Drop Top, who was behind us, there.

Soon Drop Top appeared and asked if we had seen Bear Bait.  We let him know we hadn’t seen her since she passed us at the Beauty Spot.  He sighed and stared off into space for a minute.  ” She must have passed here without realizing it”, he said.  More to himself than us.  I could tell he was deciding to go after her or not.  Finally he set his pack down and said, “She’ll realize what happened and turn around”.

The rest of us could tell they wanted to be alone and stayed at the top of the hill.

A car drove into the circle at the end of the road and parked.  A pretty woman got out and said something to Drop Top and Bear Bait.  They pointed up at us and the woman started up the hill towards our group. When she got to the top she was smiling and said, “Isn’t this great? I didn’t even know this was here.”  We found out that she was going through a stressful time  in nursing school and decided to just go for a drive.  She asked us what we were doing there. We said we hiked there. Then she asked where we hiked from.  We all said, “Georgia.” She laughed like we were joking until she saw we were serious.  She said, “What… do you mean from Georgia?” We let her know that she was on the AT and told her all about it.  Finding out that she was watching the sun set on the Appalachian Trail made her day. 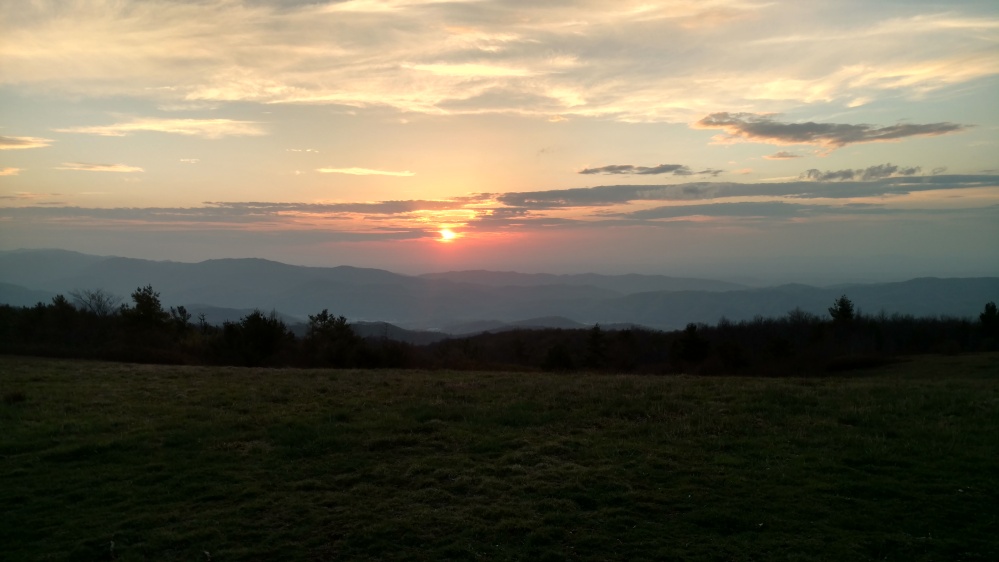 After the sun had set the woman reluctantly walked back to her car to leave.  She may have arrived at that parking lot with the weight of the world on her shoulders, but when she left she seemed light as a feather.  Her problems banished to the four winds by the simple  fellowship of human beings in the presence of something beautiful.  If only for a little while.