Its Stoats birthday!  When we first started the trail, we thought we would be done by now.  If we hadn’t been delayed two weeks in, we might have been.  But then we wouldn’t be out in the woods on this fine day!

Today was the first time in a long time where we had a deadline.  We needed to get to the Kennebec River, 14 miles away, before the ferry stopped running at 2PM.  If we didn’t make it, we would have to wait until the next day to get across.

The first 4 miles brought us, first along the shores of West Carry pond, and then back through the woods. 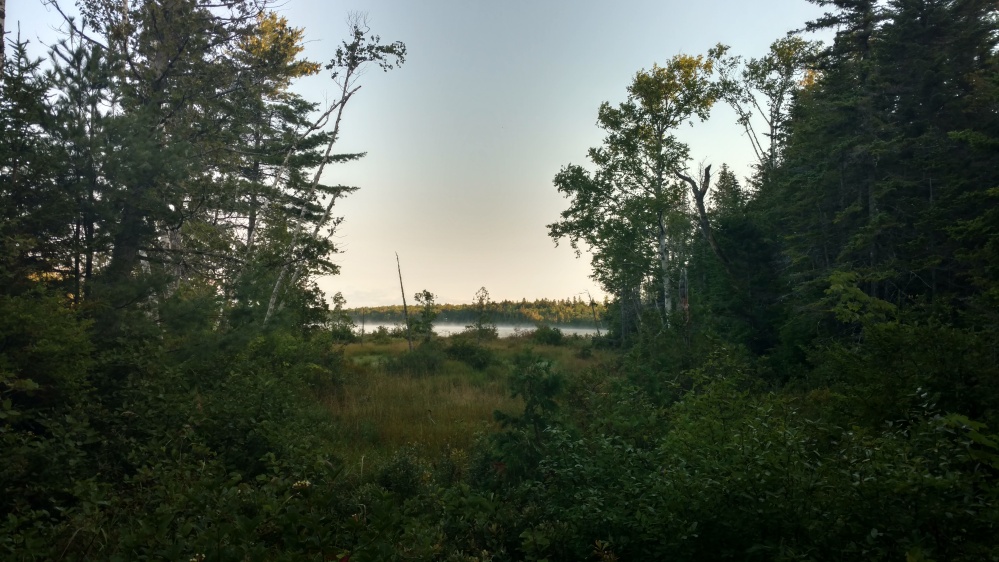 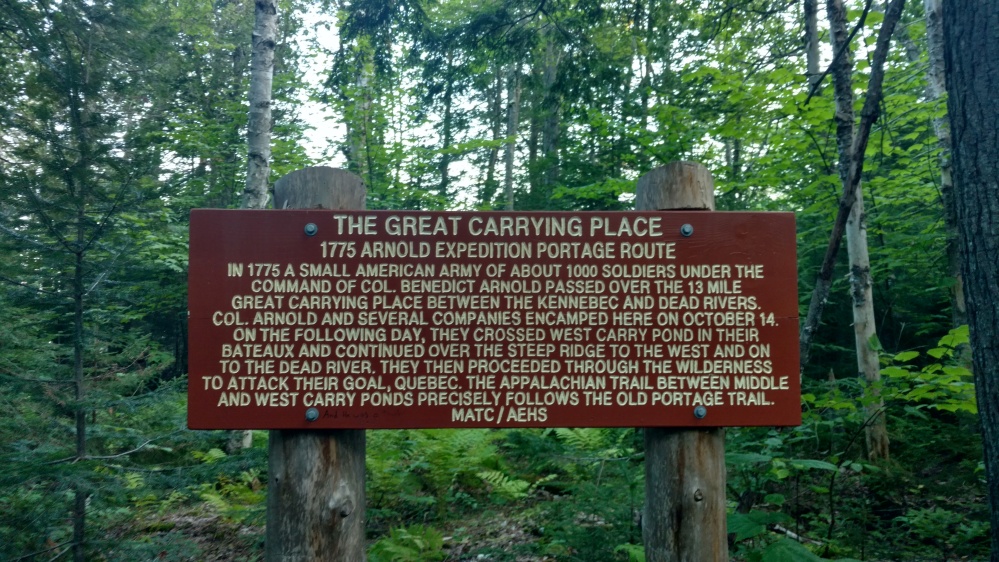 Our first stop of the day was at East Carry Pond.  We had heard that it was a beautiful area, and that it had a sandy beach that was great for swimming.  They were right.

Stoat wanted to go for a birthday swim and quickly made his way into the water.

I was too paranoid about missing the ferry to join him. That was stupid.  I should have gone swimming.

After Stoat went for a swim, we headed for the next rest stop at Pierce Pond Lean-to.  Along the way, Zeus and Flashfire got way ahead of us.  That was a little strange, because we had planned to hike to the Kennebec River together.  When we got to the Pierce Pond Lean-to it all made sense.

Zeus and Flashfire were throwing a surprise party for Stoat!

While celebrating Stoats birthday, we realized we could hang out a while.  We were 10 mile into a 14 mile day, and it was only 10:30.

The trail had been much easier today.  Easier as far as Maine standards go at least.  Even though it was mostly flat, it wasn’t any less rugged.

We got to the Kennebec river by 12:30.  Much faster than we had anticipated.

It was a pretty area.  While we waited for the “ferry”, we took a few pictures. 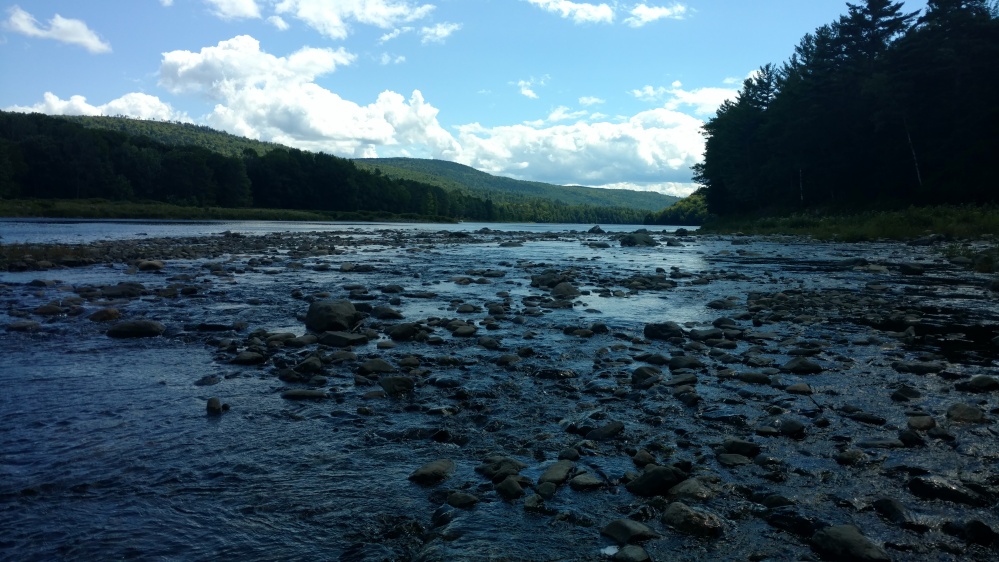 Soon enough, we saw the “ferry” coming over from the other side.   The “ferry” was really a guy with a canoe.

The ferry service was free and available only to Thru Hikers.  It was established years ago, after a hiker was killed trying to ford the river.

There is a dam release that happens daily a little after 2PM.  The river rises about two feet and the current picks up a lot of speed.  Anyone caught in that, would be in big trouble. 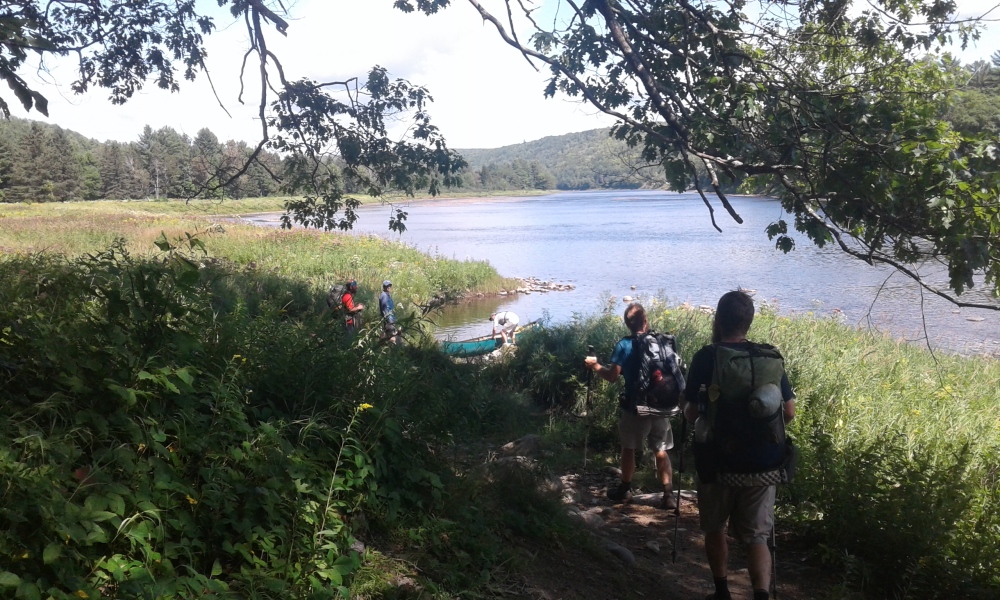 Before getting in the canoe, everyone had to sign a waiver. 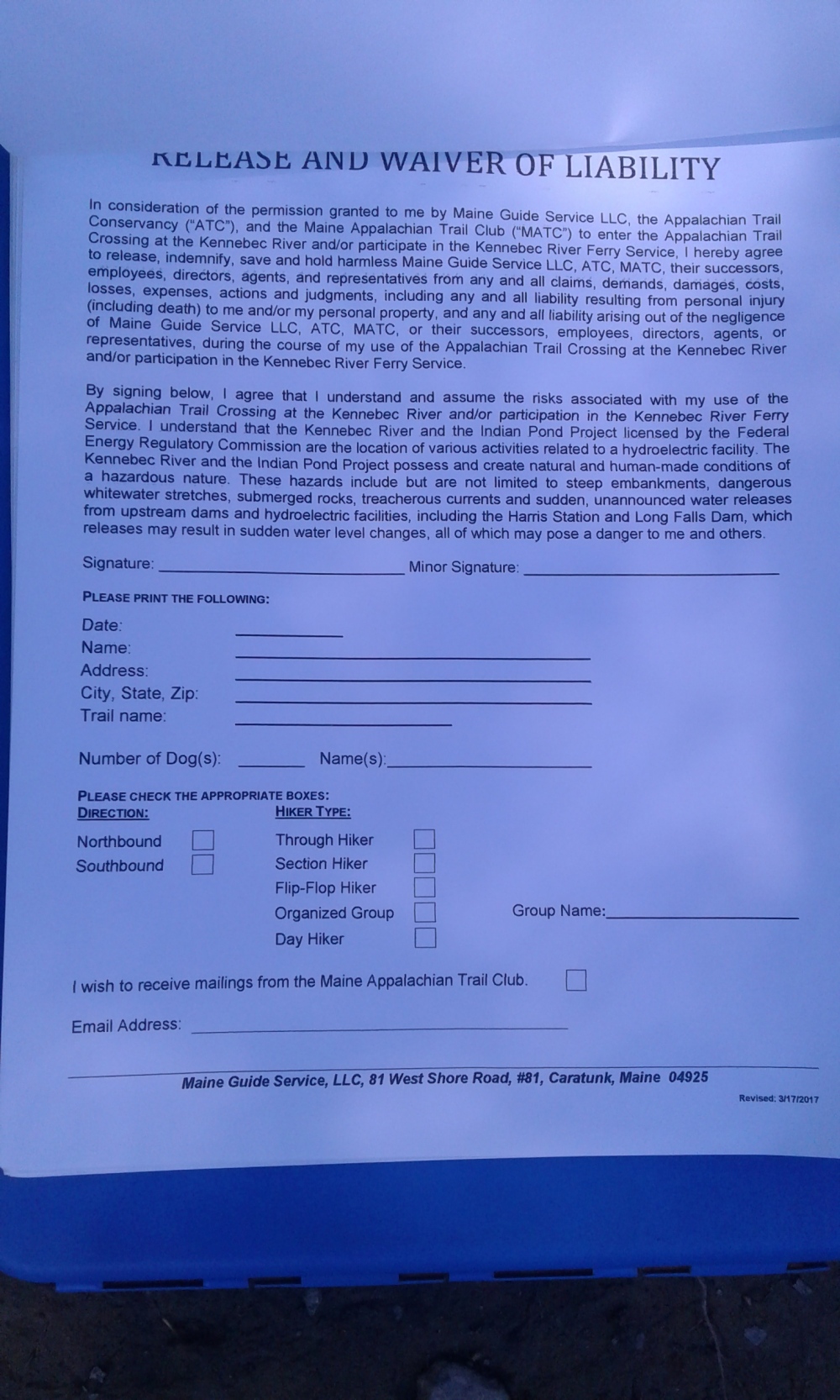 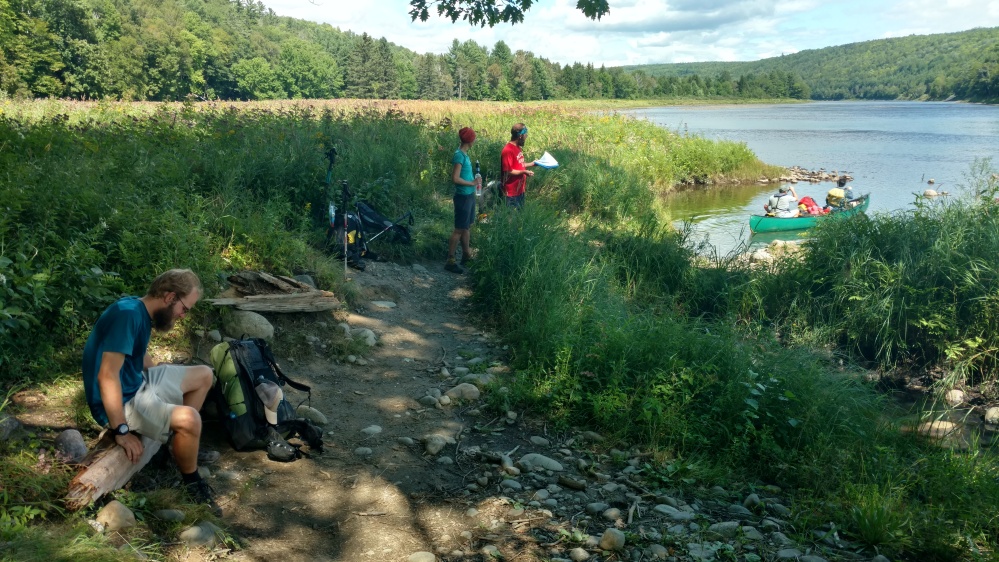 Flashfire and Zeus crossing the Kennebec

Directly after crossing the river, we came to route 201.  The place we were going to stay was 1.5 miles down the road.  We failed at getting a hitch and had to walk the whole way there.

Along the way, we passed a plant that kind of looked like a tomato, but clearly was something else.  Flashfire was surprised that I didn’t know what it was.  She didn’t know the English word for it, and had to look it up on her translation app. They turned out to be Rose Hips.  You learn something new everyday!

When we pulled up to the Sterling Inn, we knew we made the right choice of where to stay.

It looked like a very welcoming place from the outside, and even more so on the inside.

When we checked in, we found out that they had an awesome small store filled with everything a hiker would need for a full resupply!  Very nice!

The place was originally built in 1816 as a stage coach stop.  Over the years had been many things including, a bar, dance hall, and a post office.  Not since we stayed at Elmers in Hot Springs, had we been in a very old yet very nice place.

On front porch Flashfire saw a baseball bat and became very excited.  She had never played baseball before and was eager to try it out. 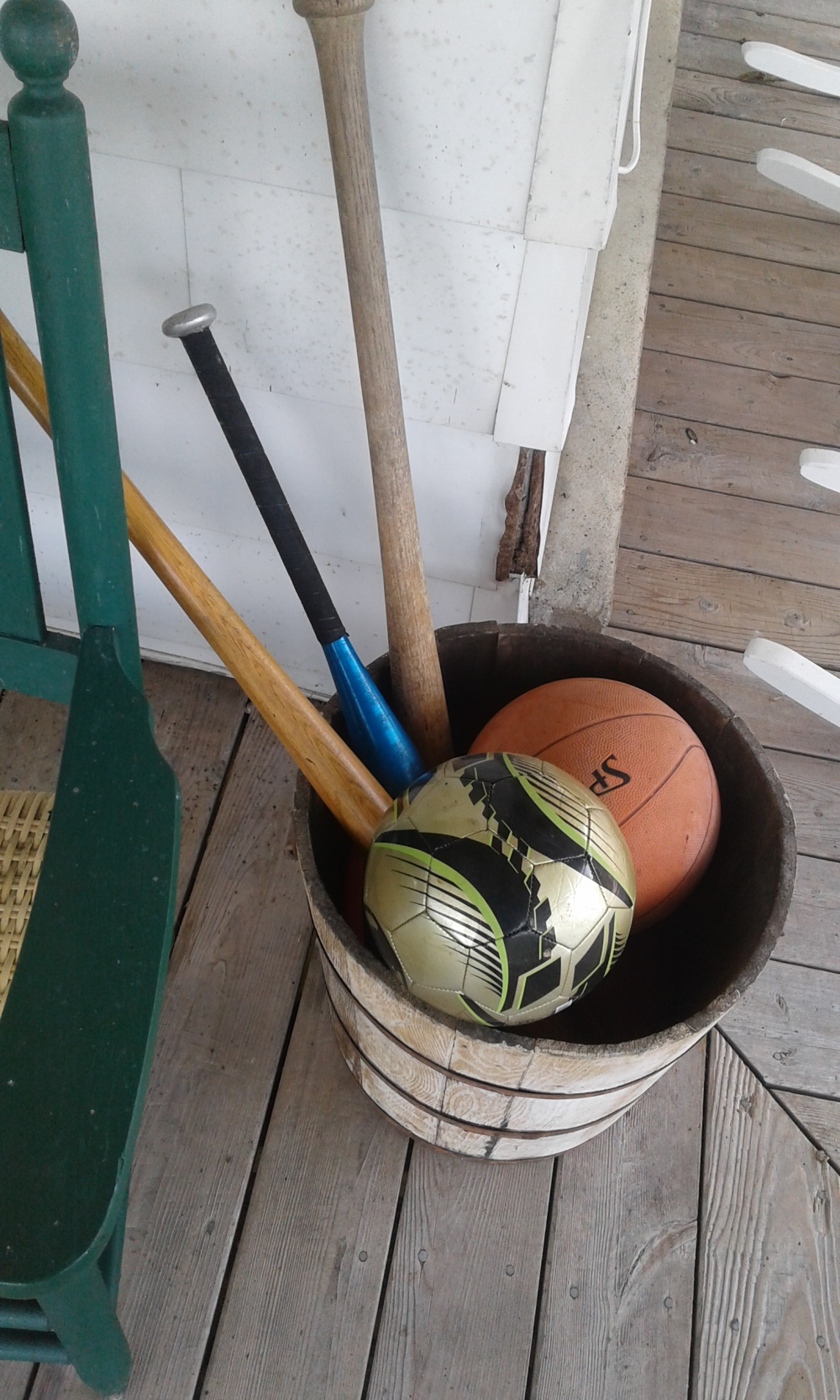 Zeus and Flashfire went out on the front lawn to give it a shot.  Flashfire hit the very first pitch… right toward several parked cars.  Luckily, the ball didn’t hit anything.  They decided that it was probably a good idea to quit while they were ahead.

The place was run by a father and son.  Around dinner time the son offered us a ride over to the local restaurant.  Yes please!

The restaurant was located in a white water rafting resort. The food was good and we all had desert in honor of Stoats birthday. 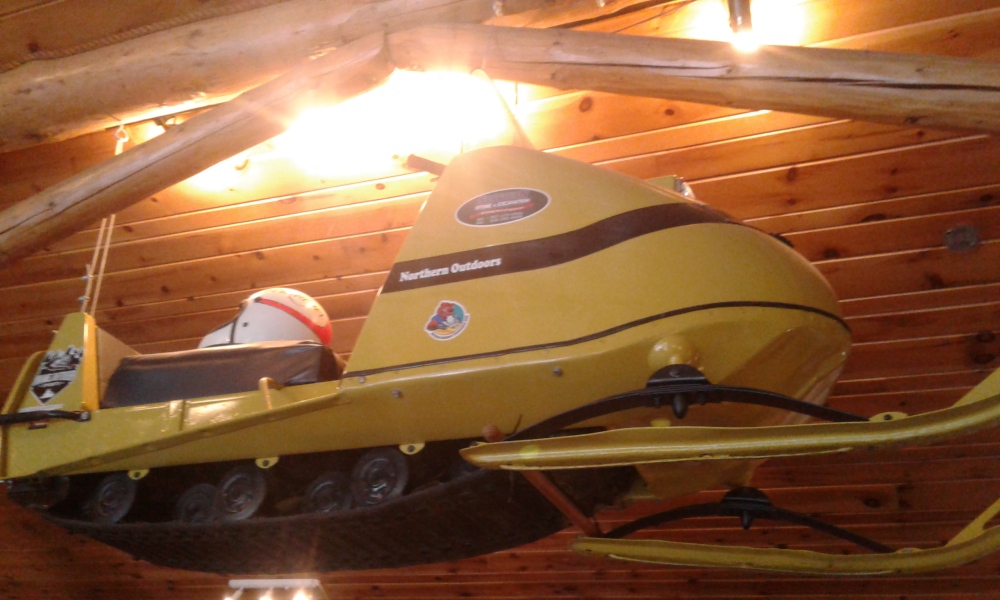 Once we were done, the son picked us up and brought us back to the Inn.

The Tramily hung out on the front porch.  Soon the son joined us, and we talked about his life at the Inn.  He and his father had bought the place about 5 years ago and renovated it.  Everything seemed to be going well for them, other than the fact that running the place took a lot of work.

We talked until the moon came up, and then called it a day.

We are really looking forward to the breakfast buffet in the morning.