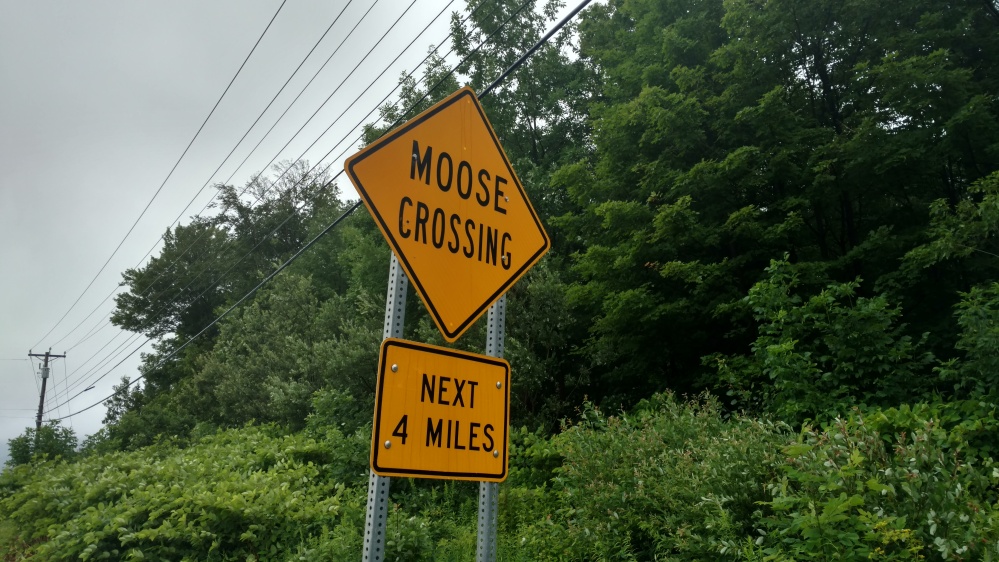 We were a mile into the day when Stoat and I came to Maine Junction.  Where the Long Path and the Appalachian Trail diverge.  Both trails were marked with white blazes.  We had heard stories of Thu hikers who had made the wrong turn and headed for Canada.  We made sure we made the turn that led to Maine.

After going up and over an unnamed and viewless mountain, we came to Kent Lake.

There was a loon off in the distance making its distinctive call, so we took a break to see if we could spot it.

While we were taking in the view, Whistler (the 74 year old man) walked by.  He stopped to chat with us a bit.  It was his last day on the trail for 30 days because he was going to Haiti to be a part of a relief effort.

There was a hiker who went by the name Pura Vida who was hiking the AT for a second time.  When he heard about what Whistler was doing he decided to join him.  How cool is that? 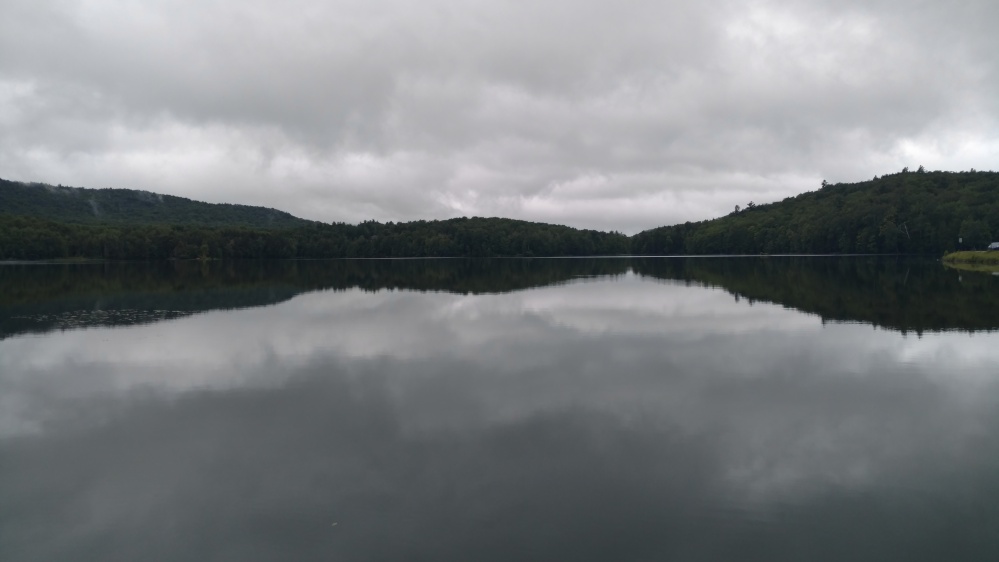 Less than two miles past Kent lake we came to Thundering Falls. 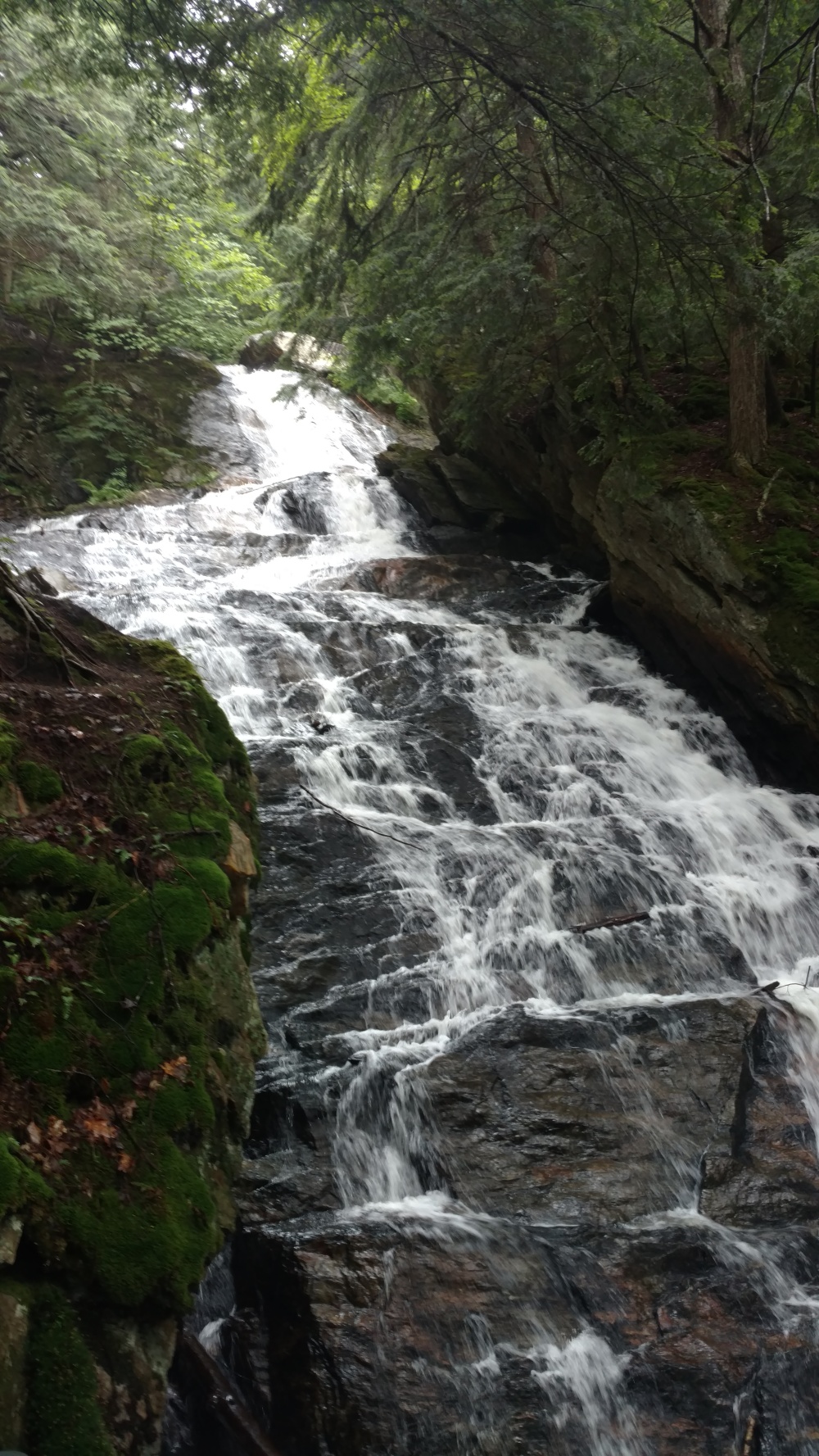 Thundering Falls seemed to be a popular place.  Even in the less than optimal weather.  Stoat and I began talking to a couple who were out for a few hours.  The lady offered to take our picture next to the falls. 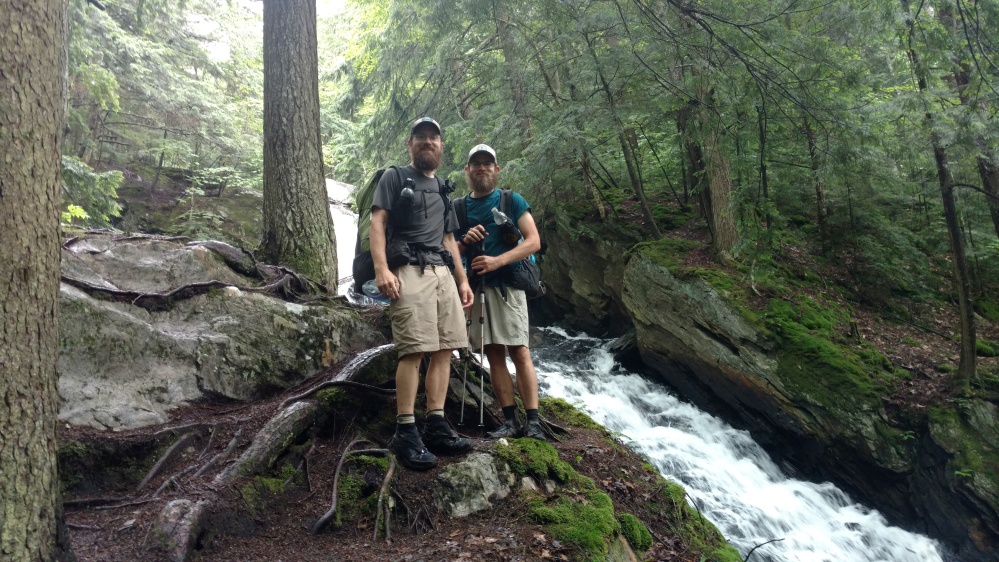 Two and a half hours later , after at least one viewless climb, we came across a very unusual trail feature.

Not long after that, we passed one very exploded tree.

We began to see Moose scat along the trail.  I guess the road sign we saw in the beginning of the day wasn’t lying. 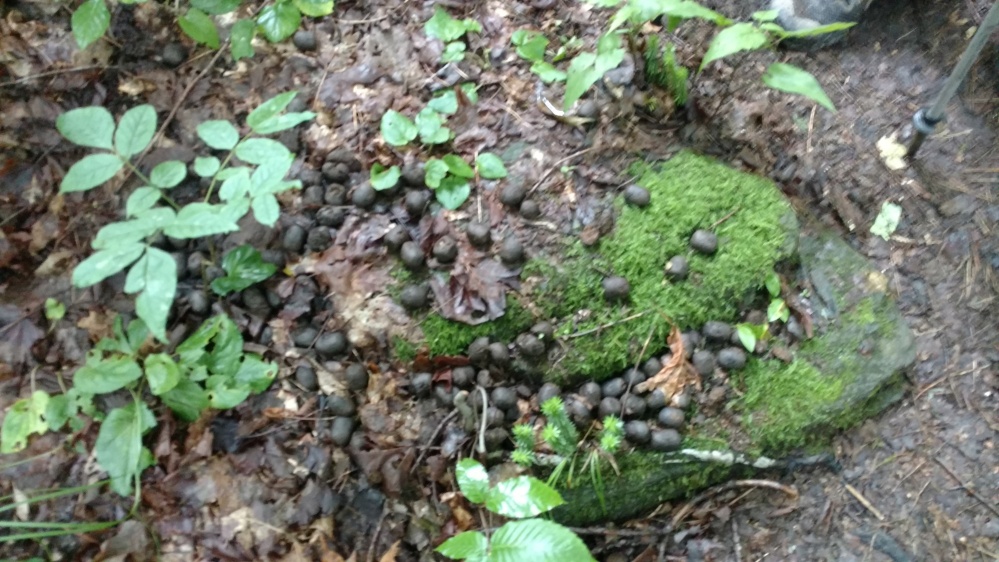 The place we were going to stay for the night was called The Lookout.  The Lookout was a privately owned cabin that was open to Thru Hikers.  Situated on top of a mountain,  it seemed like a cool place to check out.  The only inconvenient thing about The Lookout was that it didn’t have a water source nearby.  So, we had to carry extra water from a stream two miles away.

When we got there, there was a nice view through the trees in two different directions.  It even looked like the sky was clearing up. 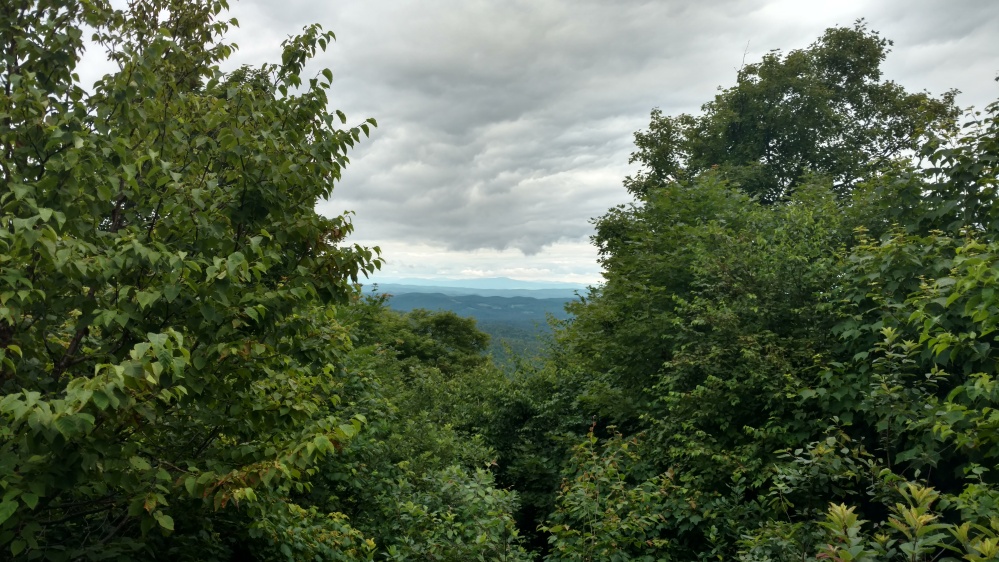 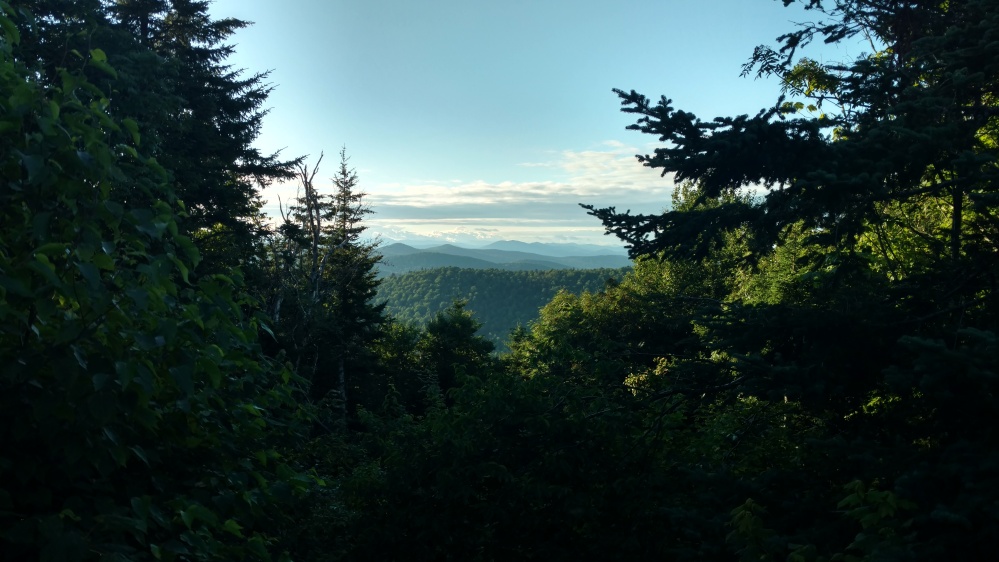 Those small views are not what the Lookout was known for, however.  The Lookout was famous for the observation deck that was mounted to the roof of the cabin. 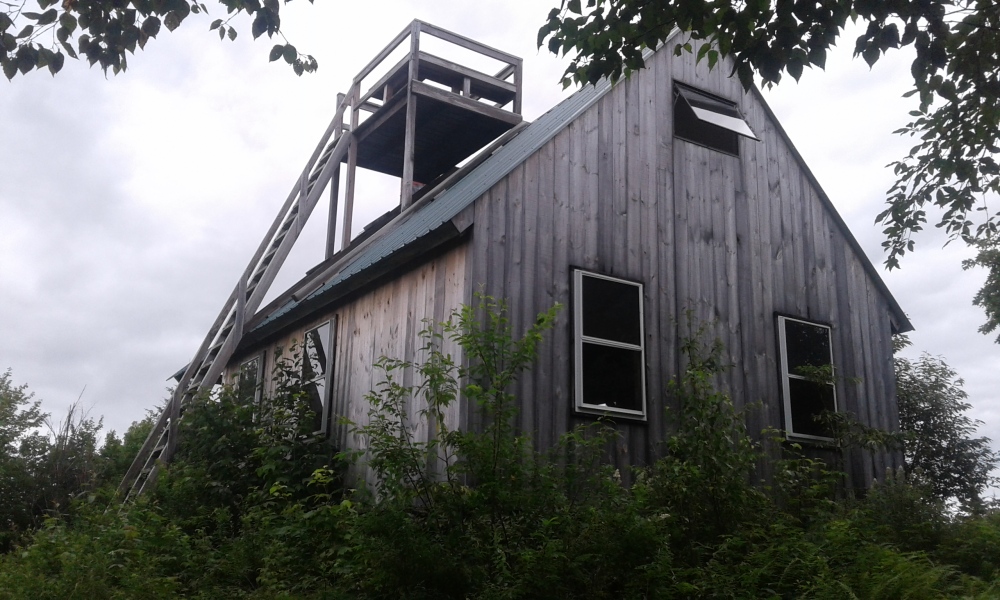 There were several other hikers, including Zeus and Flashfire, already at The Lookout.  Most of them had setup their sleeping bags inside the cabin.  It looked like it might be a clear night so Stoat and I setup our hammocks off in the woods.  That way we wouldn’t wake anyone up when we got up to look at the stars.

The sun came out, and everyone found a patch of sun to dry their gear on.  We ate dinner in the same spot.

Several of us went up to the observation platform to watch the sunset. 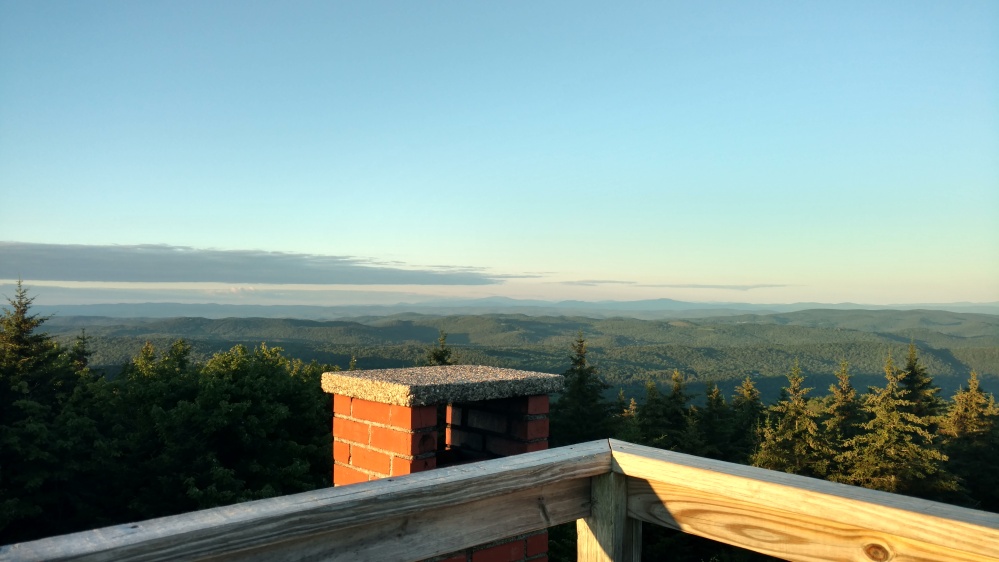 Off in the distance, still mostly obscured by clouds, were the White Mountains of New Hampshire.  One of the most talked about sections of the trail,  it was legendary for its toughness and its beauty.  After we got through The Whites, we would be in Maine.

Had we really come this far?  It almost didn’t feel real.