I woke up around 5 to see if I could catch the sunrise. The view from out the dusty window told me it was cloudy out. I went outside anyway in case the clouds were only in one part of the sky.

Unfortunately the entire sky was clouded over, and it was cool enough outside that I had to put on my jacket. Even though the weather was less than optimal, I didn’t go back inside. I had slept soundly and was in no mood to go back to bed.

The surrounding fields and the woods beyond were beautiful. It was still very early and the world had not awakened yet. The birds that we heard last night either decided to sleep in or decided it was to cold to get out of bed. The air was completely still. There was the kind of quietness that seems to accompany only the very early hours of the day. The sounds of my feet brushing along the grass was the loudest noise around.

Soon I would hear Zeus get up to make his coffee. He was usually up by 5:30. A habit he carried over from his “normal” life.

Soon everyone would be awake and we would talk to each other in hushed tones that we had grown accustomed to using in the morning.

Soon we would pack up our stuff and continue our nonsensical yet all important journey north.

But before all that happened, I was all alone in a beautiful place. Enjoying a land that was still asleep. Enjoying the quiet.

As I stood there, a thought occurred to me. I would have never seen this place if Stoat and I never made the decision to, ” Put our lives on hold” and hike the AT. The funny thing is that I didn’t feel like I was putting my life on “hold” at all. I had done more living in the last 112 days, than the last 112 months. I had seen more places, made more friends, and felt more free than ever before.

Zeus made his coffee, Flashfire got up around 6, and Stoat got out of his hammock a little after that. We ate breakfast, packed up our stuff, and were on the trail a little before 7.

Soon we were on the first of many boardwalks of the day. 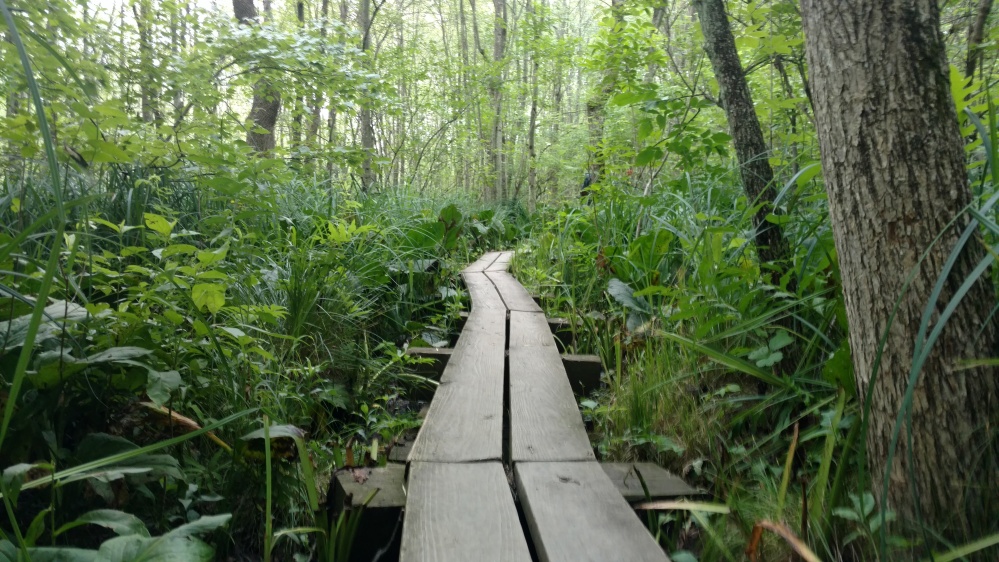 After about 2 miles we took a 0.7 mile detour into the town of Unionville NY. ( the trail in NJ in very close to NY) 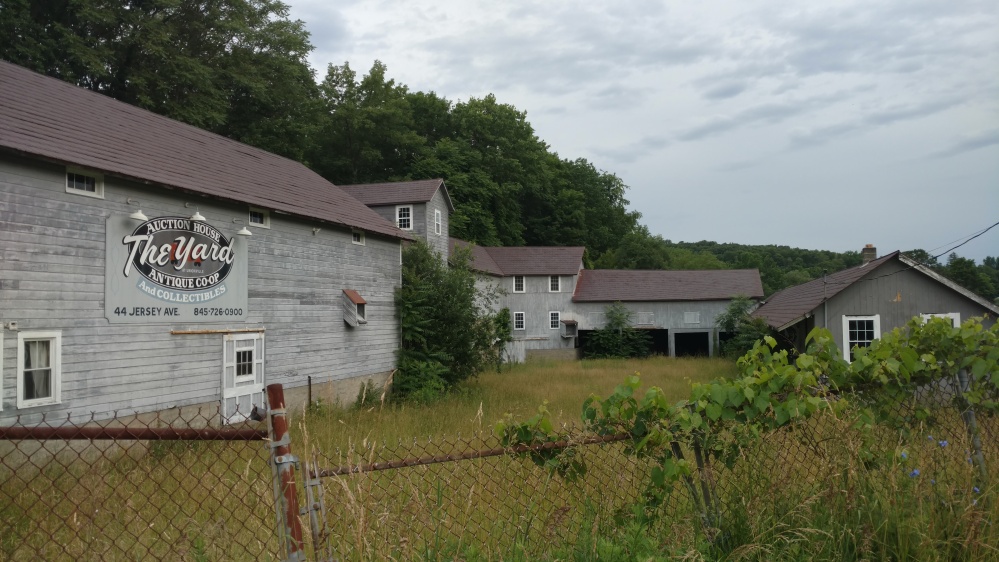 When we got into town we quickly found what we were looking for. Horler’s General Store.

It was time for second breakfast. Our Uncle Norman had gifted us some money and I wanted to treat the Tramily to a real New Jersey breakfast, even if we were technically in New York. Taylor Ham, egg ,and cheese sandwiches and coffee for everyone!

When Zeus bit into his sandwich he made a sound of slight disgust. He said “There’s ketchup on this!” I looked at him blankly for a second. The thought of a Taylor ham, egg, and cheese sandwich existing without ketchup had never occurred to me.

We ate our second breakfast and sipped our coffee on the front porch of the General Store. Soon Cash and Songbird came by. They had camped with several other hikers at a park in town that allowed Thru hikers stay there. They said that the local kids had played basketball at the nearby courts late into the night. They didn’t get much sleep.

When we got back on trail, we went through more farmland. 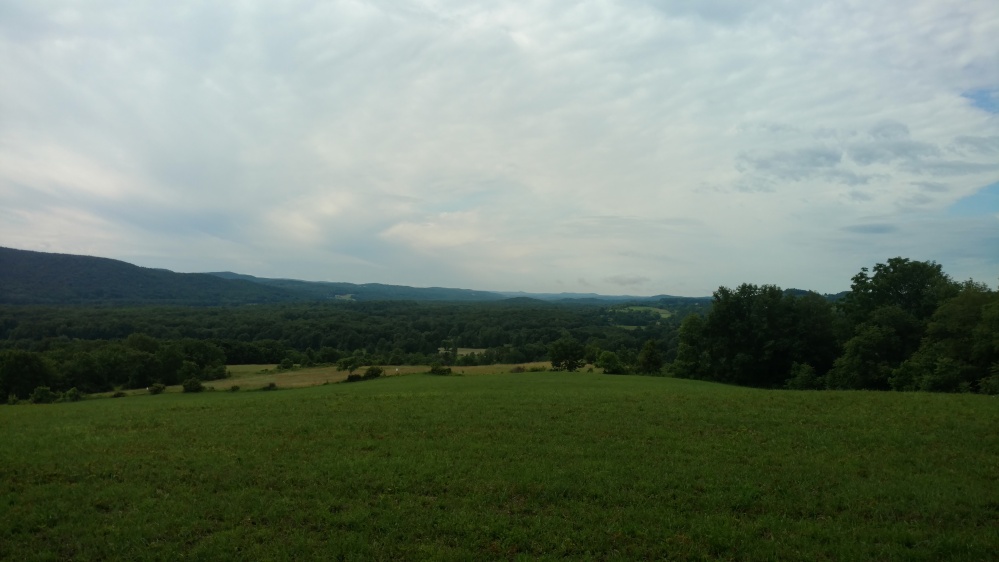 We had a short road walk where we got to see an interesting sculpture. 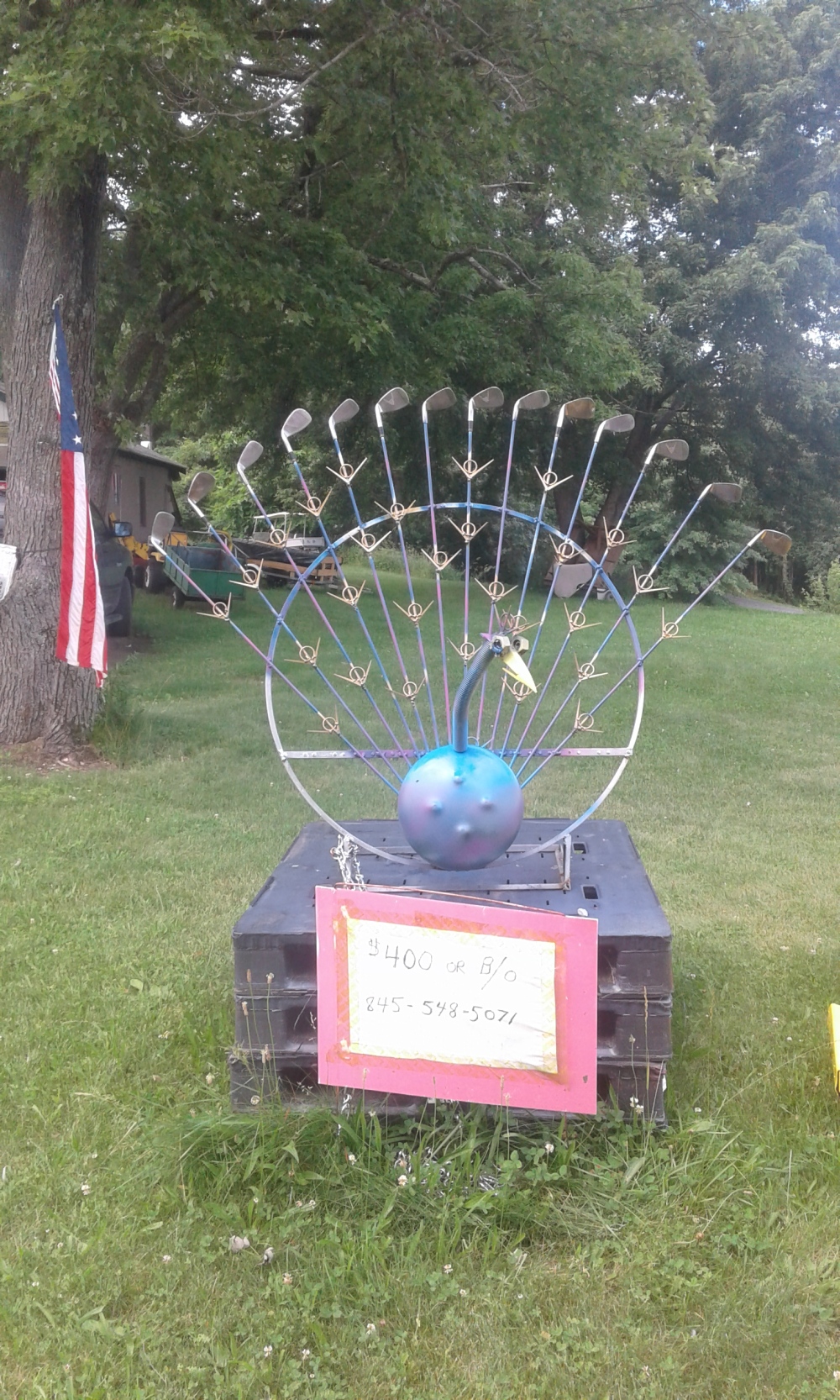 Soon we came to an area called The Wallkill Reserve. It was a wetland area that the AT skirted around. The place was teeming with wild life. There were all kinds of birds, turtles frogs, and muskrats. We would have stayed there longer, but the day had become hot and most of the trail was in the sun.

Then it was on to more boardwalks again.

After which we had a short climb to a nice view.

Eventually we came to the beginning of the famous boardwalk section of the trail. From past visits there, Stoat and I knew that we would be in direct sunlight for a few miles, so we decided to eat lunch in the shade before venturing out into the sun.

The boardwalk section was just as pretty as it was on previous visits. It felt a little different being there as a thru hiker though. This time we didn’t have a car to go back to at the end of the day. 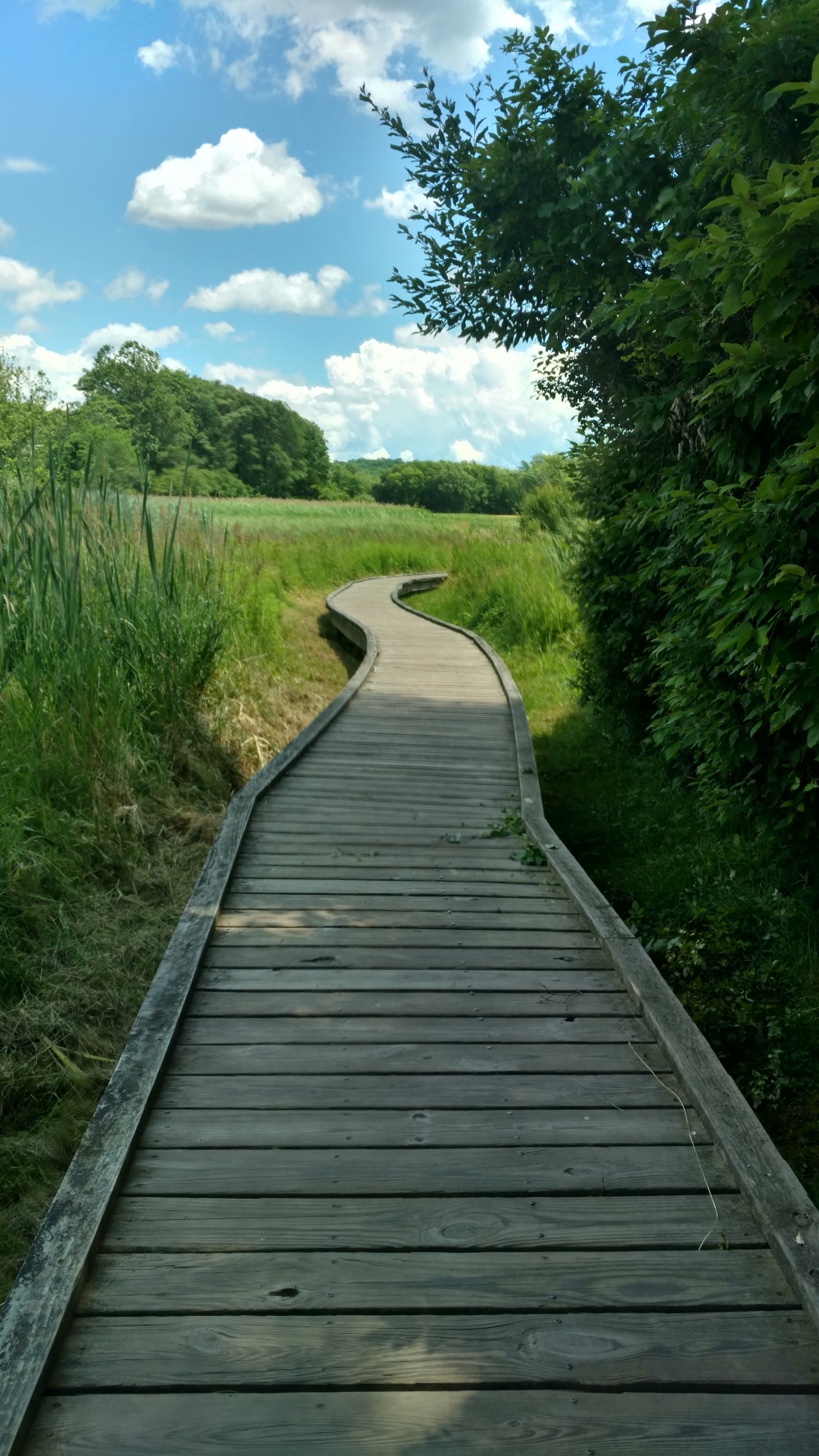 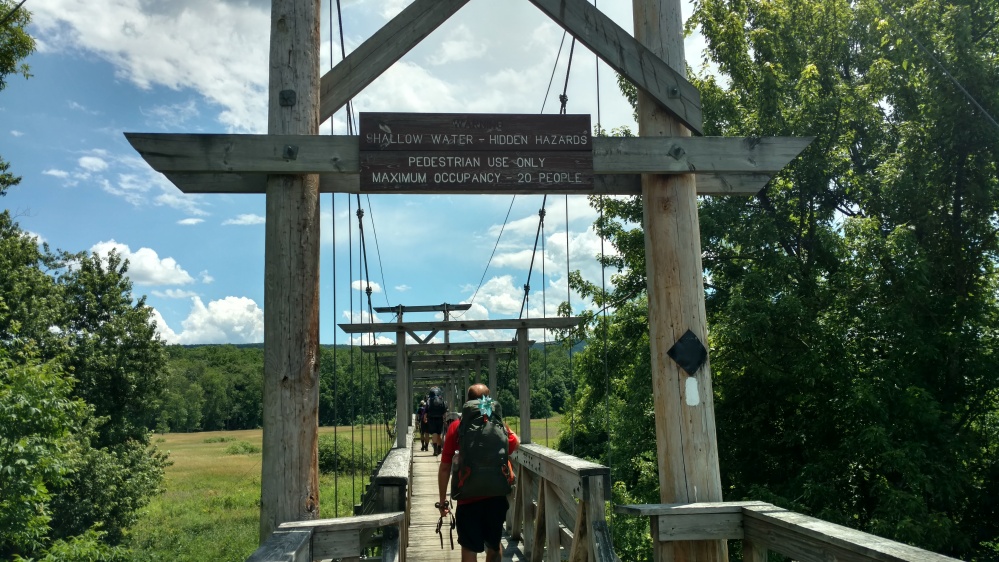 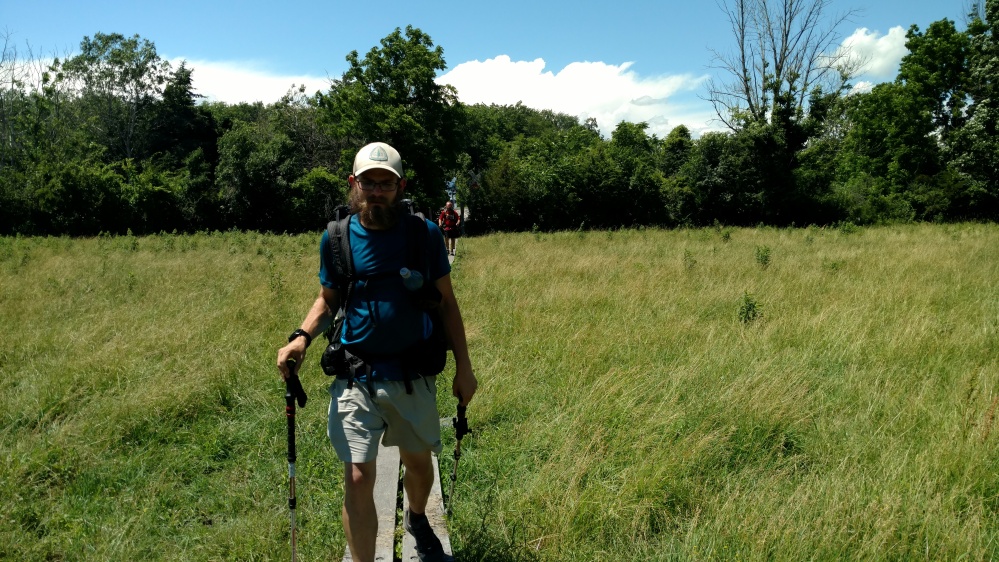 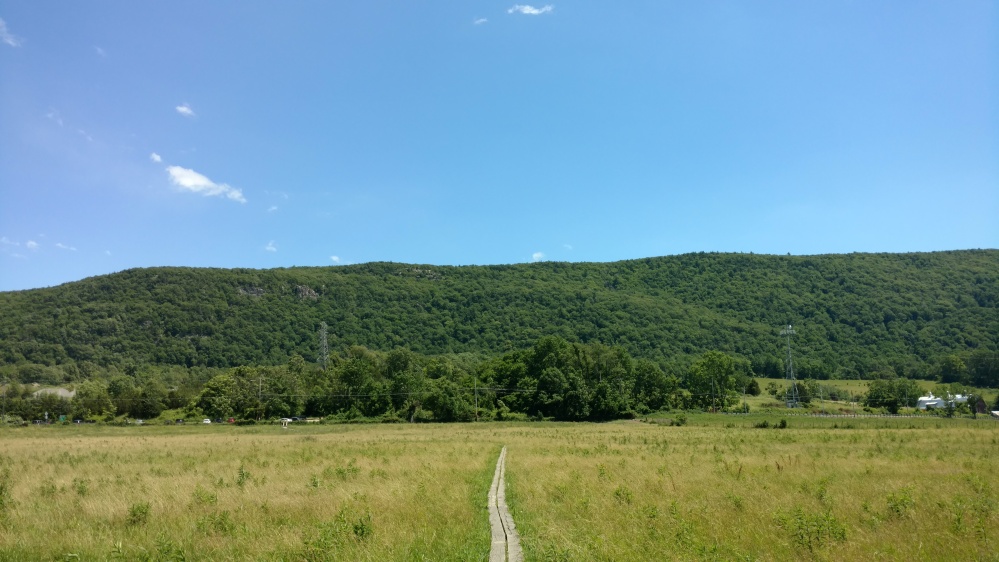 As we walked over the boardwalk the day got even warmer. After the boardwalk section ended, Flashfire said it felt like she was walking in a desert. It even kind of looked like some sort of desert for a bit. Except, Stoat and I have been in real deserts before. They were not nearly as humid.

Soon we got to a climb that is know as the “Stairway to Heaven”. The shade was a welcome change even though it did nothing for the humidity.

It was a rocky climb. Not a hard climb for Thru Hikers, but it still required effort. By the time we came to a small stream about halfway up, we were soaked in sweat. We chugged our water and then refilled our bottles from the stream before moving on.

The view at the top was very nice.

That spot was called Pinwheel Vista.

While the view was nice, the strong breeze was even nicer. The Tramily took a break there and cooled off. From our vantage point we could see the high point monument off on the horizon. It looked so far away, and yet, we were there just the day before.

Zeus and Flashfire left earlier than Stoat and I. The dark clouds off on the horizon looked like they were coming our way. It was less than 3 miles to the shelter and they wanted to get there before it rained.

Stoat and I hung out there a while longer. Relaxing and talking to several day hikers. Eventually I got up to go, but Stoat said he was going to stay there a while longer. Stoat had hiked to the vista several times before. It was a special place to him, and I think he wanted to process the fact that he had just walked there from Georgia.

The rest the days hike was uneventful.

It was very buggy at the shelter. Everyone opted to sleep in the protection of their tents and hammocks rather than stay in the shelter. Everyone except for Flashfire and Zeus. They always stayed in a shelter unless it was full. It let them get an earlier start because they had less to pack away.

Today was our last full day in New Jersey. Tomorrow we will enter southern New York. A deceptively hard section, from what we’ve been told.