Waynesboro really put a lot of work into providing a ton of info about the town.  They even had flyers printed out that had a map of all the local business that a thru hiker might be interested in.  It was a town that was in the middle of reinventing itself.  Almost all the manufacturing jobs had dried up and,  because it was located at the southern end of the Shenandoahs, the town was trying to grow their tourism economy.  The work that they put into providing information for Thru Hikers was very much appreciated.

We got a ride back to the trail head from another Trail Angel and headed north again. Soon we came to a kiosk where we had to self register to gain access to the Shenandoahs lawfully. 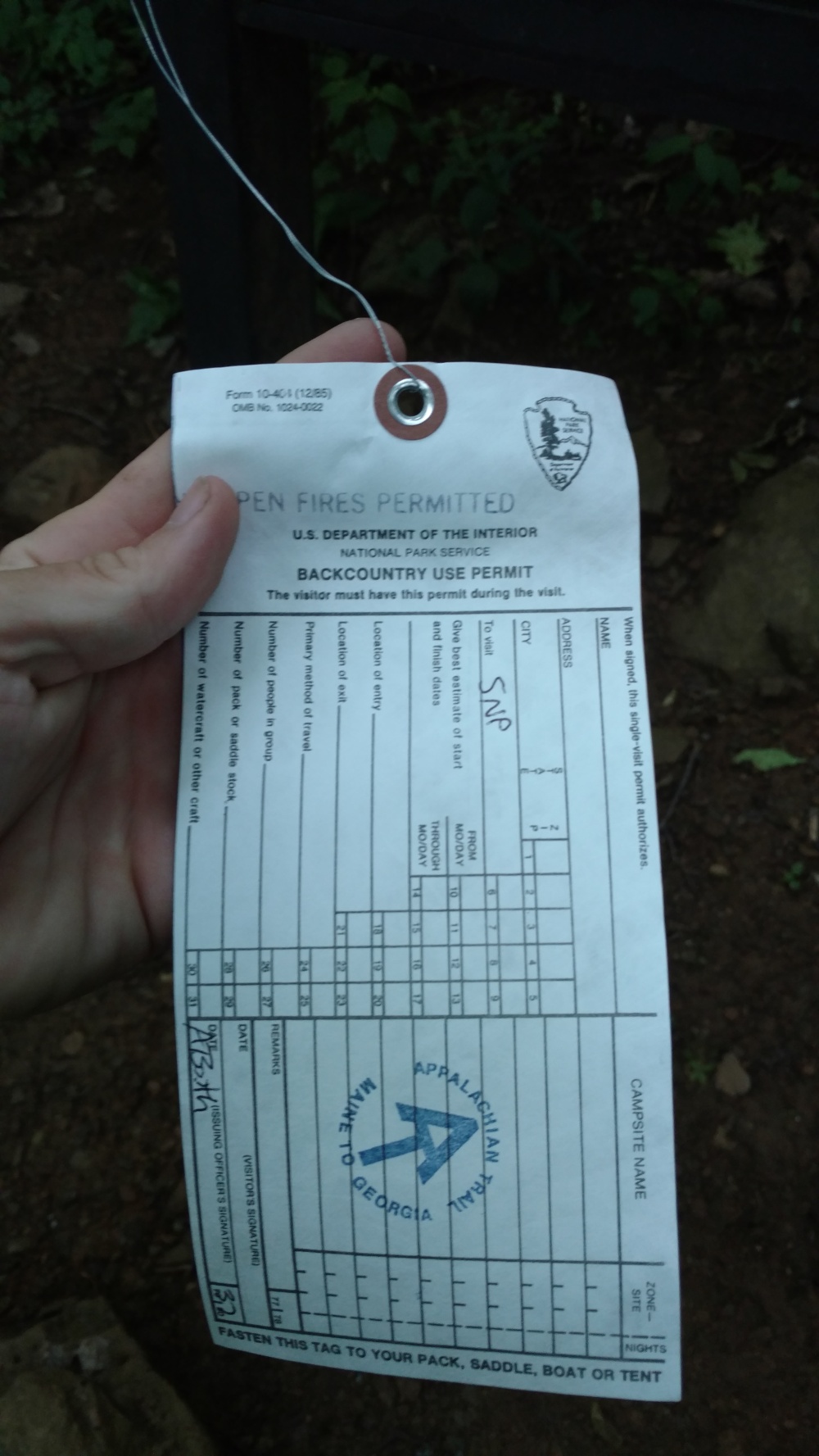 As soon as we finished filling out our forms, rain started pouring down.  Not the best welcome to the Shenandoahs.

After 7.7 miles we came to a side trail to a shelter.  I needed a break.  After spending a large portion of last night emptying the contents of my stomach, I didn’t have much fuel in the tank.

When we got to the shelter Zeus and Flashfire were already setup inside.  They didn’t feel like walking in the continuous downpour anymore and decided to call it a day a little early.

I looked at Stoat.  I was in no shape to hike any more for the day.  I asked him if it was okay to stop for the day.  He could tell that I was cooked.  Thankfully, he agreed.

The cool thing about stopping at that shelter for the day was that it set us up for a 26.2 mile day the following day.  It would literally be marathon day.  None of us had done one yet and we were looking forward to the challenge.

While we were shooting the breeze at the shelter a man dressed in peculiar clothing showed up.  He was wearing what looked to be a raincoat that a fireman would wear.  Zeus asked him if he was a fireman and the guy said something like “If, by fireman, you mean a Being that is on a edifying walk that transfixes the soul, then yes, I am a fireman.”  When the guy took off rain jacket he revealed the even stranger clothes he was wearing under it.  He was wearing what I first thought of as African robes and a little later as something Mahatma Gandhi would wear.  We would find out that the guy had gone to India after a messy divorce to find himself or something along those lines.  He may have found part of himself deep in his subconsciousness, but I don’t think he ever fully came back out.  He was now only capable of talking in philosophical metaphors. A nice guy and and interesting character for sure, but not someone I would want to hike with.

After eating a early dinner I decided to go the bed early.  We were about to hike a marathon and I needed to catch up on some sleep.  I slept better in my hammock than I did at the Marriott.  Go figure.