In the morning Woodchuck made a pancake breakfast for everyone.  There was fresh fruit, orange juice, and all you can eat blueberry pancakes.  It was something that came with the price of staying there and it was well worth the cost.  Everyone ate in the dining room while the food was server buffet style in the living room.  Woodchuck would sit at the table and ask questions of the hikers.  When he found out where people were from he would put a pin the location in the several maps that he had hanging on the wall.  He mentioned that conversing with the hikers was his favorite part about running the hostel. 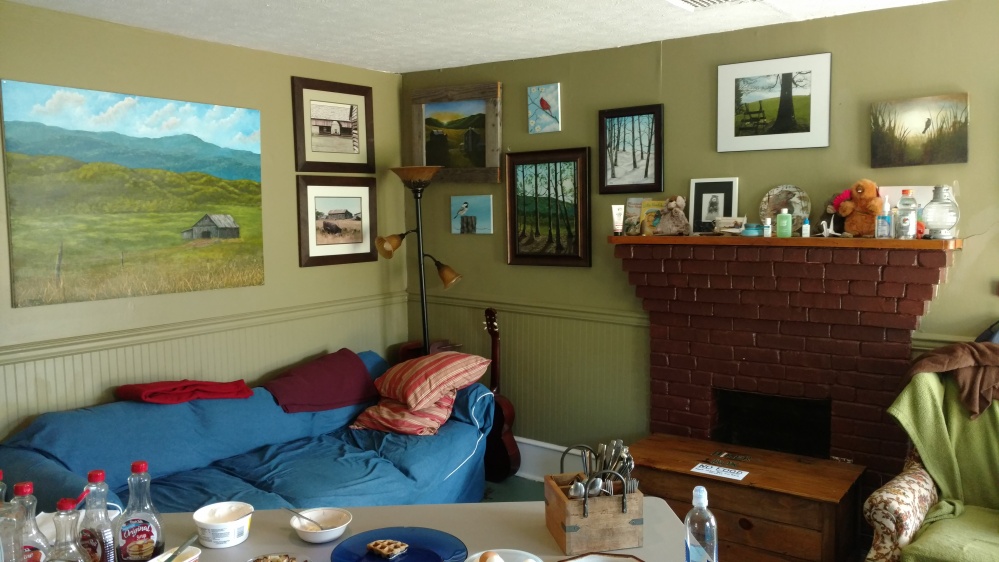 Woodchuck was an interesting guy. Among other things he was a manager at Cracker Barrel for years,  been a teacher in the backwoods of Alaska, and had hiked the Appalachian Trail.  He started the hostel in part to stay in touch with the hiking community.  Now instead of him going around the world, the world came to him.

After eating breakfast Stoat and I loosely planned what we were going to do on our zero day.

We went over to the outfitter because I was looking for a new pair of shoes. They basically had one or two different brands of shoes. That was surprising because the town had billed itself as “Trail town USA”.   I wound up getting new shoes from a gym that sold shoes on the side.  The shoes were the same brand, Altra, as my original pair but a different model.  I was happy with the old shoes (lone peak -mids) but I found the traction to be vastly underwhelming.  The new shoes were called King MT.  They were lighter and had vibram soles which I have grown to love over the years.  The guy at the store was gave me a great price but warned me that he never sold them to a thru hiker before so he couldn’t guarantee how much I would like them.  I did a quick internet search and found only great reviews so I  bought them.

After buying a new pair of shoes we went over to the post office to send our winter gear back home.  At the post office we saw Drop Top and Bear Bait.  We hadn’t seen them since we were near “Moms” snack store.  We began to talk about the flooding at Watauga Lake.  Drop Top asked if we took the high water bypass trail.  When we replied that we had he half jokingly called us blue blazers.  Then he went on to tell us that he and Bear Bait waded through chest deep water.  At one point they were walking over a bridge that was underwater when Drop Top accidentally stepped off the side of the bridge and became completely submerged.  While it was a cool story, I had no regrets about taking the bypass trail.  It the trail had been on fire I would have bypassed it. Why would the possibility of drowning be any different?

After the Post Office we went to the Dollar General to resupply and then went back to the hostel.  Stoat went off to another outfitter to get something and I relaxed around the hostel.

After Stoat got back we hung around for a while doing laundry, eating snacks that Woodchuck had for sale, and generally relaxed.  There was another hiker in the back yard that was participating in a basketball contest.  Basically the more baskets that were sunk in a row the better the prize.  The prizes ranged from a free snicker bar to a free nights stay.  The hiker wound up setting a new record and getting a free nights stay.

For dinner Stoat and I met up with Zeus, Flashfire, Godzilla, and Turkey at the local Mexican restaurant.  The food was okay.

After dinner Stoat and I went back to the the Hostel.  Several hikers were playing the bean bag game cornhole with Woodchuck.  Eventually Stoat and I played with Wolfey and a hiker named Two Dogs.  After that I taught Wolfey how to juggle.  A hobby I really got into at one point in my life.

Also staying at Woodchuck were hikers from the Warrior Expedition Program.  The Programs goal was to help veterans transition from their wartime experiences.  It was a non government funded program that paid for everything they needed to complete a long distance outdoor expedition at no cost to the veteran.  As the very first thru hiker was a veteran walking off the war, I couldn’t think of a more fitting cause for the program to support.

The two Warrior Expedition Program hikers were “Just Matt”, who was hiking with his dog Freedom, and a guy named Tank.  Over the course of conversation with Tank we found out that he now flew helicopters for a living and was based out of the small airport in our home town.  What were the chances of that? Overall, with the exception of Woodchucks, we found the town of Damascus to be a disappointment.  The town billed itself as “Trail Town USA” and it might really be that during the multi-day hiker extravaganza that’s held once a year called Trail Days.  However for the rest of the year its a just a small mountain town.  Most of its revenue seemed to be brought in by tourists who drove into town.  As such, the stores that sold outdoor gear were spread out over town.  Thru hikers would wind up easily walking over 5 miles on their off day.  Damascus was still a good trail town, it just didn’t live up to the hype, and that left a bad taste in a lot of hikers mouths.

Damascus  also had a lot of  “party hostels” that could suck hikers in and keep them there.  We heard several stories of hikers that would stay there for days and even weeks waiting for Trail Days a then never leave.  Thankfully Woodchuck’s was not like that.

Most hikers agreed that for a Thru Hiker Hot Springs had been much better.  Stoat and I agreed that taking a zero in hot springs would have been much better.  But we had a lot to look forward to. Virginia was 554 miles long and we couldn’t wait to get started. The Grayson Highlands, where there were feral ponies, were coming up very soon.