“They say the trail gets easier (for a while) once it leaves the Smokys, but that hasn’t happened yet.” – Journal entry 4/12/17

The trail leaving Standing Bear climbed 2400 feet in 4 miles.  Who needs coffee when there was a climb to wake you up.  At the top of the mountain was a grassy field.  We could see what looked like a gigantic white ketchup bottle tucked behind a small rise.  We took a short side trail to check it out.

It turned out that the ketchup bottle was only part of a slightly larger structure.  This strange structure looked so out of place that it added a sense of surrealism to the whole scene.

The tower was a FAA tower. It was a radar beacon for aircraft, but we were pretty sure it was some kind of mind control device.

From the tower we had a great view of the Smokys.  We tried to spot the “lighthouse” that we were in the day before but couldn’t find it.

From the tower we went down 1300 feet, up 800 feet, and down another 300 feet to Brown Gap.  There we found two trail angels giving out food.  Their names were Arrow and Firefly.  They were both women in their early 20s and they had Thru hiked in 2016.  I asked them if they had any advice.  “Enjoy it.  Even the crappy days.  Just enjoy it.” they replied.

They were making chocolate chip pancakes and burritos.  That might sound like a weird combination but to a thru hiker it was bliss.  They had some chairs set up and a awning to relax under.  It took us a while to leave.

After the trail magic we had to climb another 1100 feet in 3.5 miles, with a lot of small ups and downs in between, to get to Max Patch.  By the end of the day we would have hiked over 5000 feet of elevation change in 13.3 miles.  The trail definitely was not getting any easier.

Just as we were going to go up the final climb to Max Patch we met another trail angel.  He had just ran out of all his food supplies, but we thanked him anyway and talked to him for a few minutes.

The final climb up to Max Patch was pretty cool.  It was a large hill completely devoid of trees.  The trail wound its way up revealing better and better views as we went up.

The top of Max Patch was stunning.  It was massive field on top of a mountain.

We blew up our air mattresses and made ourselves comfortable.

I cant remember the order of appearances but after a while we had a nice little group of people hanging out. Soon, other small groups of hikers started to pop up as well. 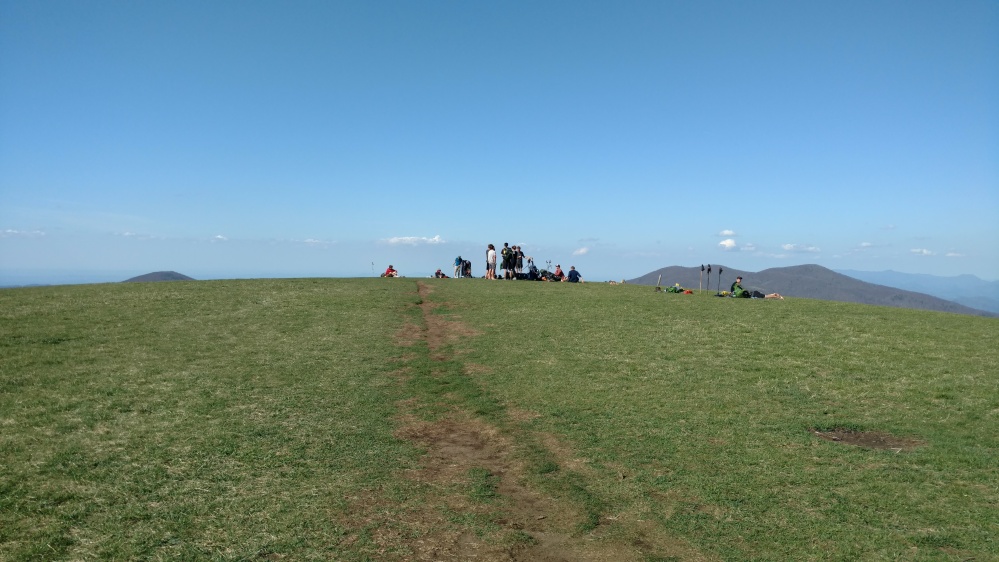 Zeus was there as well as Tommy Two Times.  A hiker named Wolfey Bizzerk joined us too.

Day hikers and overnighters started to show up.  Someone on the other side of the mountain brought a football to throw around and some of the thru hikers joined them.  That could have ruined the wilderness experience in another setting, but the place was so big that we could barely see them.  I was one of those places where sound seems to be snuffed out by the sheer amount of silence engulfing the area.

Two thru hikers said hello to us on the way to stake their claim on the mountain for the night.  They were Godzilla and Turkey.  Turkey was the one who went flying off the trail the day before (See Day 35 Post).  As they were talking I realized they were also the two guys I heard arguing in their tent a few days before. So technically we saw them a few days ago, but this was the first time we were formally introduced.

More and more hikers showed up.  There was a hiker in the distance who looked awfully familiar.  After looking at him for a minute we realized it was Drop Top whom we hadn’t seen since before we were sick.  We walked over and he introduced us to his new lady friend Bear Bait.  They met in a supermarket in Franklin and had been hiking together ever since.  It was cool to see another person we had started with.  After 8 days off trail, we never expected to see anyone from that group again.  Now we had seen two.

We left Drop Top and Bear Bait to enjoy each others company and returned to our group.  Zeus was showing off his spray bottle that a friend of his sent him.  It was filled with whisky.  Because it was in a spray bottle anyone could take a “spray” without worrying about germs.

A thunderstorm had developed off in the distance.  We watched as the dark clouds slammed into the mountains of the Smokys.  We saw flashes of lightning and heavy rain falling while the skies over our head were clear.  It looked like we got out of there just in time.

Seeing the storm off in the distance made me reconsider cowboy camping.  Ultimately I wimped out and constructed a shelter out of my rain tarp and hiking poles.

Around dinner time we noticed a large influx of overnight campers.  There was a parking lot not too far away and it seemed like Max Patch was a popular spot.

A little before the sun started to set conversations seemed to die out.  Hikers could be seen positioning themselves on the western side of the mountain.  Everyone wanted a front row seat.

For 15 or 20 minutes a silence fell over the crowd.  Everyone gave their full attention to the sunset. 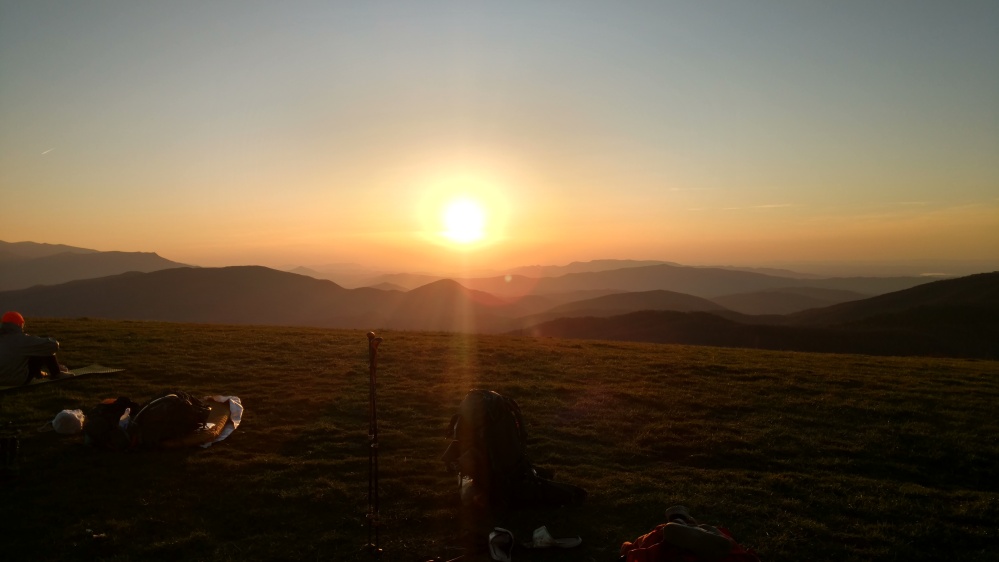 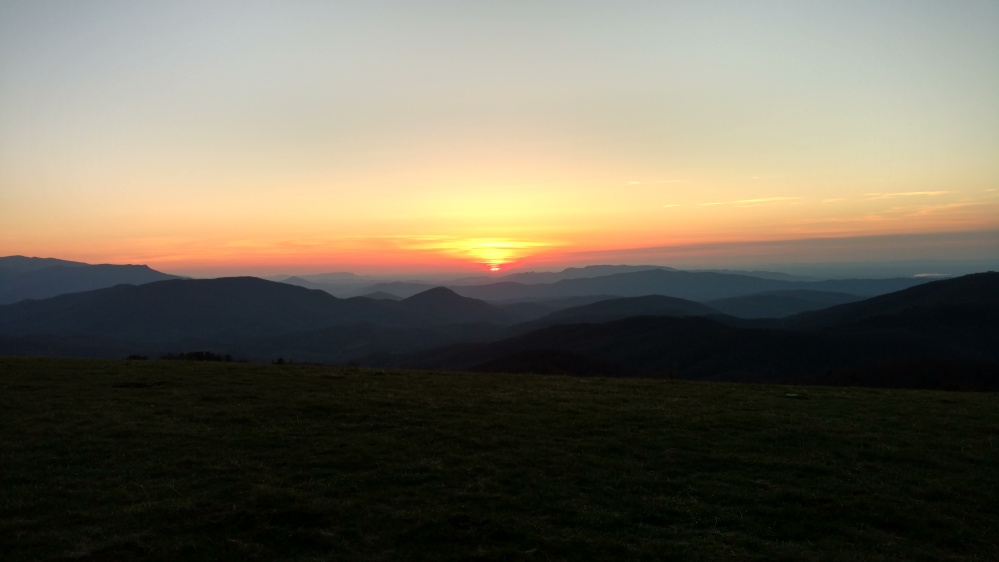 Its hard to describe the feeling I felt at the time.  There had to be around 50 people there and every single one of them quietly watched the sun set.  Its as if the collective realization that we were experiencing something special added to an already special moment.

After the sun set, people slowly came out of it.  Like at the end of a very good movie when the crowd is slow to leave their seats.  But once one person breaks the spell, others soon follow.

Just as everyone decided to watch the sunset, it seemed everyone wanted to wait for the stars to come out as well.  Fires were started and conversations all over the mountain were had.

The stars came out while we talked.

Suddenly, a big “oooohhh” noise came from almost everyone on the mountain.  Stoat pointed and shouted “look!”  There, streaming almost from horizon to horizon, was the biggest shooting star I have ever seen.  I looked like a comet.  It had a head and a long streaming tail.  I have never seen anything else like it.

Every day since we left Newfound gap had been special.  That night was the icing on the cake.  If nothing else happened for the rest of the trip, it would have still been worth it.