All was quiet on the trail.  It had been that way since we left Newfound Gap the day before.  The sun was shining, there was only the gentlest of breezes, and there was almost no one on the trail.

Not long after we left camp we reached Eagle Rocks.  Getting a view like that early in the morning leads one to speak in hushed tones.  The good vibes from the day before looked like they were going to continue on.

A few miles later we saw a horse riders coming up the trail.  This was a little strange because horses aren’t allowed on the AT.  As they approached we could see that one of the three horses didn’t have a rider.  When they came up to us we saw one of the riders was a female ranger.  We greeted them and quickly found out the the other guy was the owner of the horses.  They were on a rescue mission to help out a hiker who had a leg injury.  The injured man and his 12 year old son had no way to get out of the mountains.  The injured mans injuries were not life threatening so a helicopter was not needed.  I’d imagine that rescue by horse is a heck of a lot cheaper than rescue by helicopter.

The owner had a chainsaw strapped to his horse.  I had never seen that before but I quickly realized why it might be needed.  The AT doesn’t allow horses so its not maintained to accommodate horses.  A fallen tree that a hiker could easily duck under would be impossible for a horse to get past.

Stoat made a comment to the horse owner that ” He had nice ponies.”  The owner kind of made a face but said thanks.  After they were out of ear shot I said to Stoat, ” Dude, you just called that guys horses ponies.”  I let him know that he made a faux pas.  Stoat didn’t see what the big deal was.  I didn’t press the matter further.  It wasn’t until months later that I realized Stoat did not know the words “Pony” and “horse” were not interchangeable.  He was under the impression that ponies were young horses.

The trail still had snow in spots but it was showing up less and less. 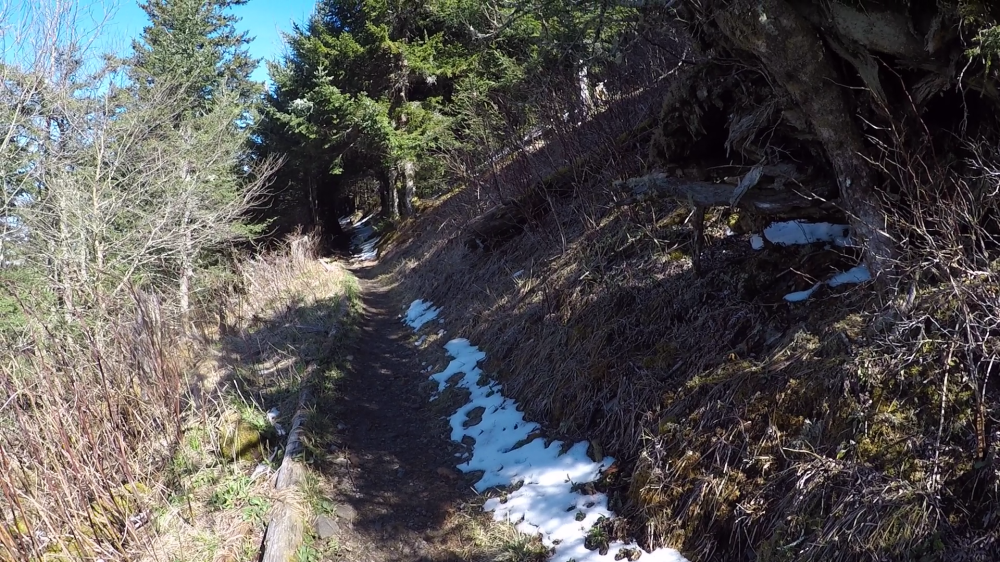 A little while later we met thru hikers Cantaloupe and Lorax.  They were having a snack and we decided to join them.  They were some of the only hikers we had seen that day.

Not long after we had left our snack spot we went over the last mountain on the AT over 6000 ft until we reached New Hampshire.

As I stood there looking at the beautiful view my thoughts drifted to what the New Hampshire mountains would be like.  “What would happen between now and then? A lot could happen in the 1600 miles we had left to get there.  1600 miles.  wow….”

Eventually we came to a spot that was snow free, in the sun, and had a great view.  Lunchtime!

After lunch we stopped at a spot where a small plane had crashed in the 1980’s.   We looked over the wreckage for a few minutes and made some wardrobe changes.  the temps had risen into the 60s and the sunshine began to burn our skin.  So we tucked our bandanas under our hats.  It looked ridiculous but it saved us from getting sunburn.

As we hiked the remaining miles to Cosby Knob shelter we marveled at the lack of hikers on the trail.  Here we were on a gorgeous day, in prime thru hiking season, in the most visited national park in the country, and we were almost all alone.

We got to Cosby Knob shelter with plenty of time to spare.  We found some good spots to hang up our hammocks and hung our clothes to dry in the warm sun.

I decided to record a short recap of the last few days on my Go Pro camera.  When I started to describe the views we had,  I got a little choked up and changed the subject to something else.  I was a little surprised by that.  I guess in that quiet moment of reflection I realized I was having the time of my life.

Eventually the area started filling up with hikers.  The Mother/son team called the snail brethren were there.  We hadn’t seen them on trail since before we were sick.  We also saw a couple who we hadn’t seen since day 4.  It seemed we weren’t the only ones with several unplanned days off trail.

Soon Neapolitan Showed up.  It was great to see him!  After talking for a while, he let us know that after the Smokies he would be taking a day or two off to visit with his girlfriend.  It would probably be the last time we saw each other.

I fell asleep that night listening to the guys in the tent near me passive aggressively argue with each other.  It was actually pretty funny.