I woke to the sound of snow flakes sliding off my rain tarp. It sounded like someone lightly gliding their fingers over a piece of paper. It was soothing in a way. It was soothing, but it also meant it was colder out than I wanted it to be.

There was only a light dusting of snow on the ground but the snow didnt look like it was going to stop anytime soon.

We ate breakfast, changed back into our damp clothing from the day before, and hit the trail.

Hiking in the snow always took more energy. It didn’t matter if it was half an inch or 10 inches. Every step forward would slide just a little bit backward. All those little back slides add up after a while.

At around 7.4 miles into the day we had a decision to make. We were at Double Spring Gap shelter and had to decide whether or not to keep going. We planned to go another 6.1 miles to the next shelter. This also involved going over the highest mountain on the AT, Clingmans dome.

The snow storm had gotten worse and we didnt want to get stuck out on the trail. We talked it over and I asked Stoat was he wanted to do. After a moments pause he said “Lets just go for it.”

The climb up Clingmans Dome, except for one section, wasn’t too steep. The snow, which was around 2 – 3 inches deep at that point, slowed us down only a little. I wasn’t as bad as we thought.

All the views on the way up were clouded over, but that’s not to say we didn’t see beautiful things. The contrast between the white snow and the dark browns and deep greens of the surrounding pine trees was gorgeous. How many people got to see the trail like that?

When we got to the top of Clingmans Dome we took a short side trail over to the tower that is built on the treed summit. At our first glimpse of the tower Stoat said, “It looks like a water slide designed by the Jetsons.” 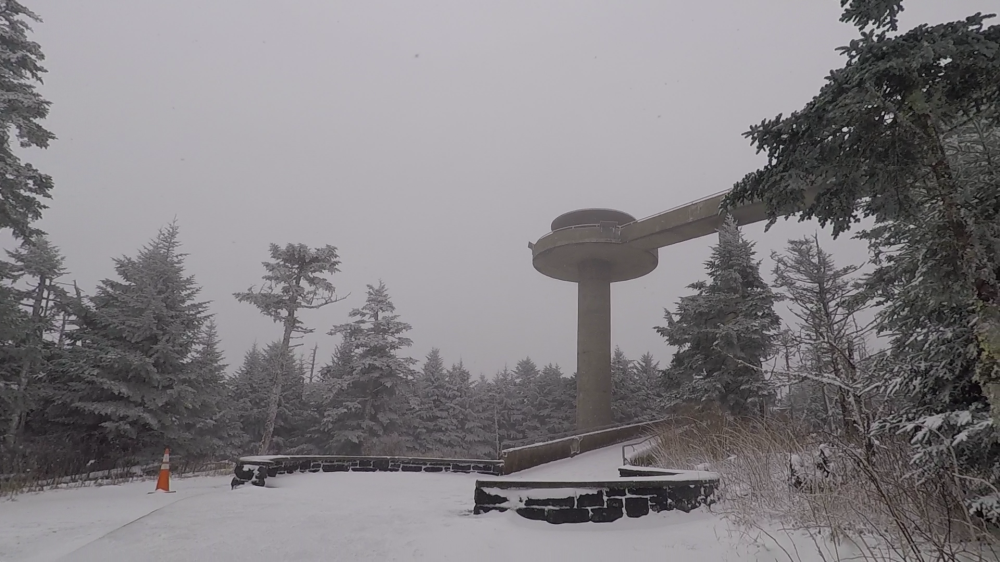 The road that the tourists take to the tower was closed due to the weather. We had the place to ourselves.

We started walking up the ice coated circular ramp. As soon as we were above the trees we were blasted by wind. The snow, which was falling gracefully just moments before, had become horizontal flying ice pellets.

We met a hiker who was coming down from the top. He had a white beard and a serious winter hat. The kind that have the flaps for the ears. His name was Supe and I offered to take his picture. He handed me his phone and I took a picture. Then he headed back down. That just left one thing for Stoat and I to do. We walked the remaining distance to the top side by side.

We were at 6667 feet and it felt like it. We had to lean into the wind to keep from falling over. The ice was stinging our face and we couldn’t see more than 40 feet but it didn’t matter. We were having a blast. 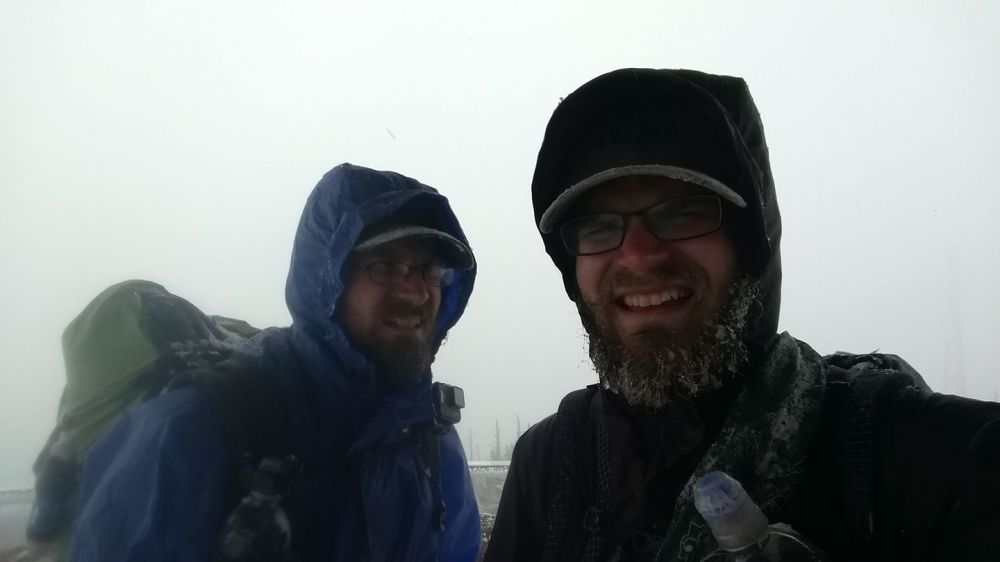 Not long after leaving the summit we passed the 200 mile mark. Usually there is some sort of marker indicating a hundred mile mark. If it was there, it was buried under the snow.

Two and a half mile later we were at The Mount Collins Shelter. Well, we were to where we thought the shelter was supposed to be. We saw a side trail with a sign next to it. It read “Mount Collins Shelter 0.5 miles” After hiking 13.5 miles in the snow, an unexpected extra half mile hike off trail was not a welcome sight.

The side trail was slushy in spite of the very cold weather. Any hope of keeping our feet dry was quickly lost.

We began to set up our hammocks in a grove of trees near the shelter. Stoat had taken off his glove to tie a few things up. A minute ot two later his said his hand froze up and it was stinging. Recognizing the signs of early hypothermia, he quickly made his way over to the shelter. After securing the loose ends of my hammock I followed after him.

The shelter one open side had some tarps set up to block the wind. When I ducked inside I saw Stoat holding a cup of hot chocolate. A hiker had just made some and offered it to Stoat. It helped a lot.

They guy who gave Stoat the hot chocolate was the Father portion of a father and daughter team. They were out section hiking for several days. They had hung their hammock from some out of the rafters. This was against the rules but it didnt get in the way of anything so there was no harm done. The thru hikers didnt care anyway. It just meant there were two more open spots in the sleeping area of the shelter.

Speaking of the shelter, we decided Stoat was in no condition to go back outside. So after more than 200 miles into the AT, we finally decided to sleep in a shelter.

I cooked dinner for the both of us. As I did, more hikers started to trickle in. By the time we were done eating it was pretty much full. A few times we had to make room for one more but no one minded. This was a survival situation. No one was going to deny entry to anyone.

There were many stories shared that night. One story was about a hiker that had to be rescued by helicopter within the last couple of days. The cold had affected her judgement and a series of bad decisions led to a dire situation. Luckily the helicopter made it there in time.

Supe was there and we found out a little more about him. He was a retired diesel mechanic. There was also a group of section hikers led by a woman named Valerie. Their group hiked different parts of the US every year.

Everyone was pretty tired, so after hanging our wet cloths up to “dry” we went to bed.