In the morning we were sitting eating breakfast with about 20 to 30 other people. At one point everyone was saying their name and where they were from. We soon found out there was another New Jerseyian at our table. His name was John and he lived about an hour from us. It was really cool to meet a fellow hiker from New Jersey.

We arrived at the Amicalola Falls Visitors Center at around 8:30 a.m. The small group of hikers we were with funneled into the visitors center. We were greeted by a couple of Volunteers and asked to sign the thru hiker register. Once that was accomplished we headed down a hallway and out the back entrance. We found ourselves in a courtyard of sorts. To the left and right were benches where a few hikers were doing last minute adjustments to their gear. Straight ahead was a simple unadorned stone arch with a sign next to it. The sign read Appalachian Trail Approach 8.5 miles.

My brother and I joined the other hikers at the benches and did our last minute adjustments. The shuttle driver took a picture of all the hikers that he dropped off and said good luck and goodbye. We were on our own.

The group of about 10 hikers at the benches slowly started to dissipate. Groups of ones and twos would take a picture under the arch and then head out. It wasn’t long before Jonathan, myself and another hiker were the only ones left. We asked the other hiker ( who would later be know as Salty Camel) to take our picture, then, with a feeling of equal parts nervousness and excitement, we turned around, and went through the arch together.

It was a strange feeling. There we were, starting off on the adventure of a lifetime and there was almost no one else around. There wasn’t a crowd of onlookers. The media was no where to be seen. There wasn’t even a guy over-enthusiastically hitting a cow bell. It was just my brother and I on a trail in the woods. It was perfect actually.

The approach trail is 8.8 miles (not 8.5 as indicated on the sign) and its mostly a gradual uphill climb . Except for the part with the 604 steps which gains about 400ft in 0.3 miles. We didnt find it very difficult.  Probably because we took our time. With our excitement levels high it would have been very easy to start flying up the stairs, only to keel over in a hundred or so steps. We made a concerted effort to hold back on the reigns and enjoy the views.

The day was overcast and the falls weren’t at full strength but that didn’t matter. It was beautiful and I was standing at Amicalola Falls. Something I have read about for years. Again I thought “Wow, This is really happening!”

After climbing the stairs there was a nice view looking down the 700 foot waterfall into the valley below. After taking a few pictures and having a snack we headed for Springer.
It wasn’t long until we were at the summit. We took some pictures next to the bronze plaque depicting a hiker from the thirties looking off into the distance. The was also a small metal door built into a nearby rock. We opened it and took out a logbook that thru hikers traditionally sign and wrote something. We were now officially thru hiking!

We hiked another 0.2 miles to the Springer Mt shelter and camping area. We both felt like we could keep hiking on but ultimately decided to stick to the plan. I had read too many stories of hikers injuring themselves early on because they pushed to hard to fast.
The sun had come out to warm us and we began to setup our hammocks. A man and woman were crashing through the underbrush towards our general direction. All the while the woman was loudly regaling the guy of her courageous experience at a retail store. They went past us thankfully, but took a long time to find a camping spot. I know this because we would hear “And that’s when I demanded to see the manager!” and “I shouldn’t have to pay for that!” and “The customer always right! Right?” coming from various locations in the distance.

We filtered our water, cooked dinner, and got in our hammocks for the first time on the trail.

The view from Springer Mt 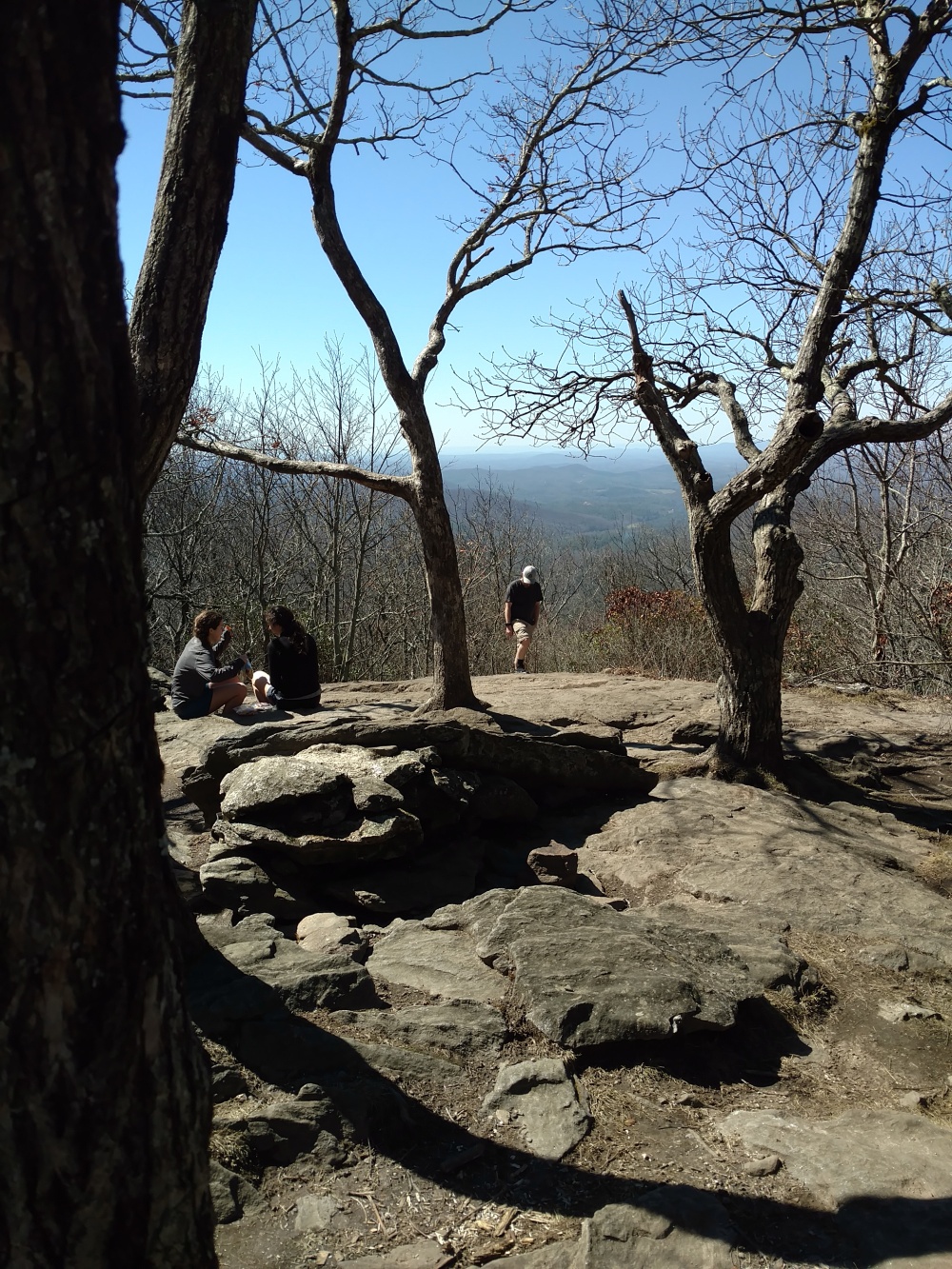 The plaque on the summit of Springer 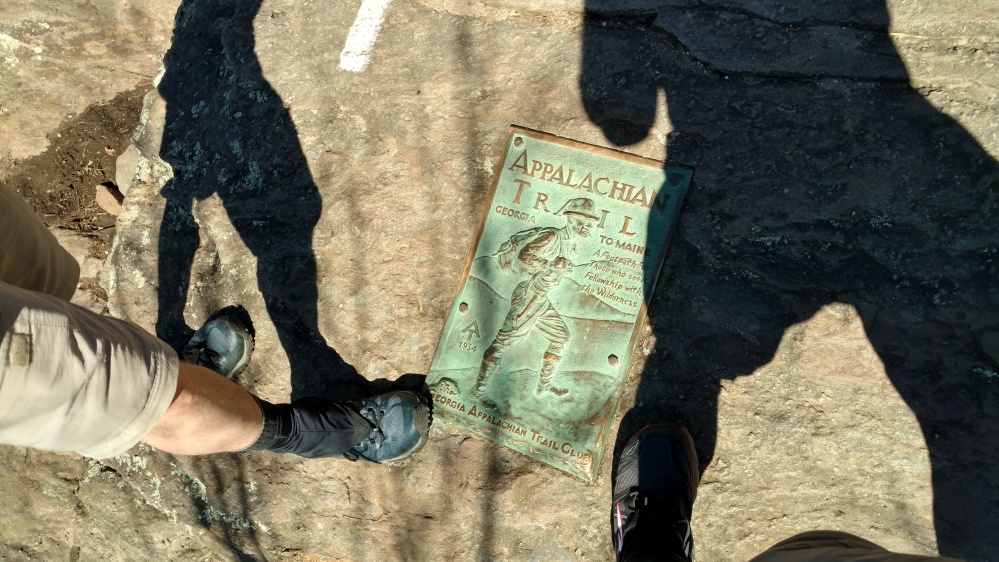 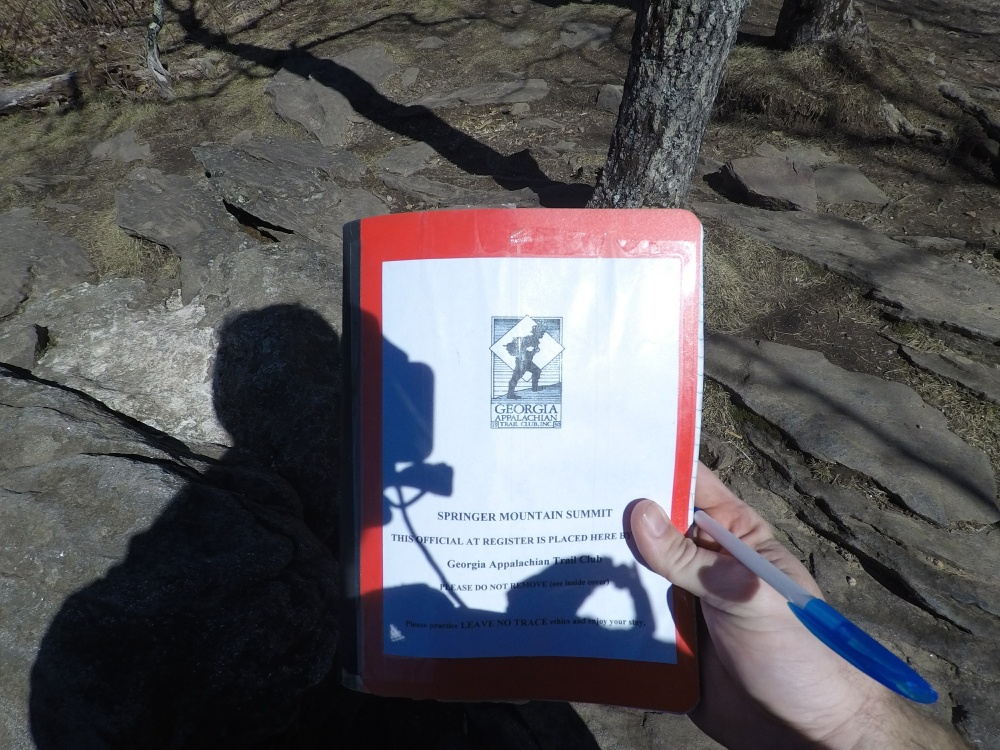 One thought on “Day 1 : The Beginning”